When i lived in the South, I will admit I used to eat at Chick-Fil-A all the time. I was dimly aware that they had some sketchy religious leanings or something, and they tended to hire only surrealistically white people to work in their restaurants, but hey, the sandwiches were good.

Well, not really good. But at least better than much of the mediocre fast-food stuff you could get at, say, Taco Bell or Burger King.

I wish I could say that I was surprised to learn that Chick-Fil-A has bought into the virulent strain of anti-gay nonsense that seems to have the self-described Christian conservative bits of society in such a frenzy, but I’m really not. Like I said, I was dimly aware that ther was some kind of right-wing religious something something at play. 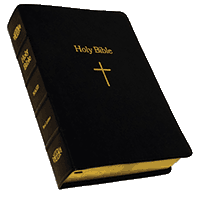 But the media attention about Chick-Fil-A and gay marriage got me to thinking. Most self-described Christian conservatives base their opposition to gay marriage on two Bible verses. Leviticus 18:22 reads:

Thou shalt not lie with mankind, as with womankind: it is an abomination.

If a man also lie with mankind, as he lieth with a woman, both of them have committed an abomination: they shall surely be put to death; their blood shall be upon them.

The rest of Leviticus goes on to say similar things about cutting your beard, wearing clothes made of different fibers, eating shellfish, having sex with a woman on her period, letting different kinds of cattle graze in the same field, and executing women if their husbands cheat on them they cheat on their husbands (seriously, it’s there, Leviticus 20:10).

Most Christians don’t follow these rules, arguing that Jesus made them irrelevant except the ones about homosexuality because those are totally different from the shellfish ones because of reasons, and some will even quote a third Bible verse, Romans 1:26-27, to justify banning gay marriage:

Because of this, God gave them over to shameful lusts. Even their women exchanged natural relations for unnatural ones. In the same way the men also abandoned natural relations with women and were inflamed with lust for one another. Men committed indecent acts with other men, and received in themselves the due penalty for their perversion.

But the Bible, both old and new testaments, actually spends a whole lot more time talking about divorce than it does about homosexuality. Both testaments are very, very clear that divorce is never permitted, and that those who divorce and remarry are guilty of adultery, a sin forbidden by the Ten Commandments, and with the penalty of death according to the old testament…

Um, wait a minute, didn’t we recently see a serial divorcee running on some kind of pro-family, conservative Christian platform? 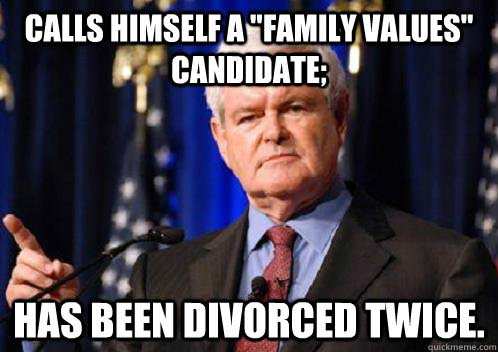 In fact, the Bible even claims that Jesus, who never spoke about homosexuality at all, had plenty to say about divorce, in Matthew 5:31-32:

And it was said, ‘Whoever sends his wife away, let him give her a certificate of divorce’; but I say to you that everyone who divorces his wife, except for the cause of unchastity, makes her commit adultery; and whoever marries a divorced woman commits adultery.

The Bible has Jesus speaking the same message many more times, in Mark 10:2 and Luke 16:18, for example.

What would the right-wing Christian pronouncements look like if they actually applied the same thinking on divorce to their supposedly “Bible-based” blatherings about homosexuality? What would happen if you took their hysterical anti-gay screeds and replaced the word “homosexual” with the word “divorce”? It seems a fair substitution; the same moral, Biblical justifications for opposing homosexuality even more strongly apply to divorce, after all.

I started Googling Christian proclamations about homosexuality, which…well, if you have ever felt the need to go trolling on a motorboat down an open sewer, doing that sort of Google search will give you a similar experience. And I took “homosexuality” and replaced it with “divorce.” The results were…interesting.

First, let’s look at the Web site Got Questions? The Bible has answers! to see what sort of answers we might find in the Bible on the subject of social tolerance of divorce. On the site, we see this argument:

It is clear, however, that the Bible condemns divorce as an immoral and unnatural sin. Mark 10:2-12 identifies divorced sex as an abomination, a detestable sin. Luke 16:8 declares desires and actions for divorced people to be shameful, unnatural, lustful, and indecent. Malachi 2:13-16 states that divorcees are unrighteous and will not inherit the kingdom of God. […] It is clear that divorcees “marrying” is not God’s will, and would be, in fact, sinful.

Can’t argue with that. The Bible does in fact say exactly that.

From Complete Marriage and Family Home Reference Guide by James Dobson of Focus on the Family, we get:

The divorcee agenda includes teaching pro-divorce concepts in the public schools, redefining the family to represent “any circle of people who love each other,” approval of adoption by divorcees, legitimizing remarriage after divorce, and securing special rights for those who identify themselves as divorced. Those ideas must be opposed.

The Illinois Family Association has dire warnings about the catastrophe happening in public schools:

Your local public schools are supposed to be places where young minds are taught the basics-reading, writing, and arithmetic — and how to think critically. But, increasingly, they are becoming institutions where liberal and even radical social agendas are implemented, designed to undermine the truths we teach our children at home and church.

Today, more than ever, parents must take to heart their God-given responsibility to guide their child’s education and moral training. Activist administrators, faculty, and school board members work tenaciously to implement radical social views through curricula, policy, and the professional development opportunities they provide to staff and faculty, all at taxpayer expense. They work to undermine our deeply held beliefs using our hard-earned money.

Organizations constantly pressure school administrators and teachers to use the classroom to indoctrinate students into accepting divorce as just another healthy and moral option, demonizing traditional beliefs in the process. […] These political events are used to get the attention of all students and implicitly convey the message that participating schools support divorce.

I suppose that means we’d better not allow any divorced teachers into public schools. Who knows what such immoral people–people who under Biblical law should be put to death!–might do to our children.

Former Presidential hopeful Michele Bachmann, the child of divorced parents, clearly spoke from her own experience when she said:

Divorce leads to the personal enslavement of individuals. Because if you’re involved in the divorce lifestyle, it’s bondage. Personal bondage, personal despair, and personal enslavement. And that’s why this is so dangerous. […] It is profoundly sad to recognize that almost all, if not all, individuals who have been divorced have been abused at one time in their life. Sending pro-divorce message to children is child abuse. We’ve all but lost the generation that is under 30 years of age. Some would say even under 40 years of age. Because this generation has already shrugged its shoulders, gotten on the boat of apathy and said, ‘Yeah, hey, what’s wrong with being divorced?’

Today’s opinion is the product of a Court, which is the product of a law-profession culture, that has largely signed on to the so-called divorce agenda, by which I mean the agenda promoted by some activists directed at eliminating the moral opprobrium that has traditionally attached to divorce.

The conservative political group Renew America is quite specific on the goals and tactics of those who oppose Bible-based sexual morality and believe that divorce is OK:

Through a carefully crafted, decades-old propaganda campaign, activists have successfully cast divorcees — many of whom enjoy positions of influence and affluence — as a disadvantaged minority. They have repackaged and sold to the public behaviors which thousands of years of history, every major world religion and uncompromising human biology have long identified as immoral and sexually deviant.

As with every major political movement, the divorce lobby is pushing a specific agenda. At its core is a concerted effort to remove from society all traditional notions of sexual morality and replace them with the post-modern concept of sexual relativism. That is to say, when it comes to sex, there is never right or wrong. All sexual appetites are “equal.” If it feels good, do it.

Ultimately, the divorce lobby’s primary objective is to radically redefine our foundational institutions of legitimate marriage and the nuclear family by unraveling God’s natural design for human sexuality. […] There’s hope for people who are trapped in the divorce lifestyle or who suffer from unwanted thoughts of divorce. Part of our fallen condition as humans is that we are all subject to sin. Those who know the Savior of the world, Jesus Christ, are no better or worse than those who engage in divorce.

But through the loving and redemptive power of Jesus Christ, we can all find salvation from sin. So can divorcees. With God’s help, we can turn back the tide of sexual and moral relativism that has both permeated our society and offended our founding principles.

Now, of course, if folks were to say things like that, they’d rightly be considered barking mad. After all, taking select passages from the Bible and using them as blunt instruments to attack folks who engage in supposedly “sinful” behaviors when there are clearly so many folks who do this…that would be nuts, right? And taking those arguments to their logical conclusion–the Bible clearly says that anyone who divorces and remarries is an adulterer, and also clearly calls for adulterers to be put to death…why, that’s so absurd on the face of it that nobody could make that argument with a straight face, right?

16 thoughts on “If homophobic Christians read the Bible, what would the world look like?”