So for those of you who’ve been living under a rock for the last couple of days: Yesterday, something amazing happened.

No, I don’t mean the US soccer Olympic team beating Canada by one point in a dramatic overtime goal. I mean something really amazing. Something mind-blowing.

We took a one-ton nuclear-powered robot rover and threw it 350,000,000 miles, then landed it on the surface of another planet using cables from a flying rocket-powered robot crane. 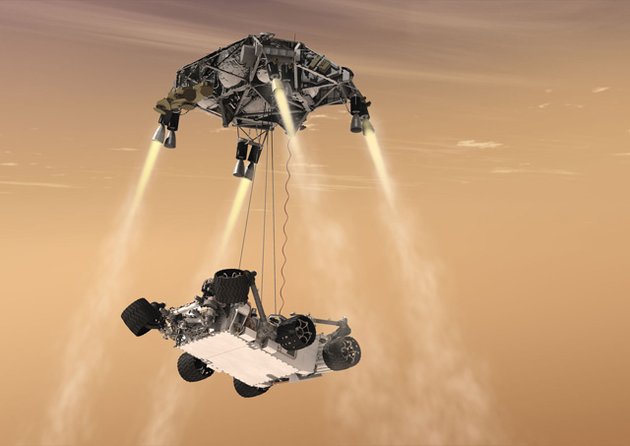 And it worked. That’s the cool thing about science: It works whether you “believe” in it or not.

However, as always happens whenever NASA does something amazing, a bunch of people have trotted out all sorts of nonsense about how we shouldn’t be spending money on space exploration when there are so many problems back here on earth. I went to a Curiosity landing party at the local museum of science and industry, and sure enough, someone posted something on the Facebook page for the event something to the extent of “I wonder how many children will die from lack of clean water while we land a probe on Mars” or something.

Now, I have been told that it’s technically illegal to beat these folks. And I’m sure their hearts are in the right place; they’re not trying to be anti-intellectual, they just have little sense of the size and scope of the economy, nor how much money gets spent on space exploration, nor how much money we spend every year on things that we really could do without. And they seem to have an either/or mindset as well, as if to say that every dollar that goes to space exploration is a dollar that is taken away from needy children as opposed to being taken from, say, the Pentagon’s budget for paper clips.

Now, I think that doing things like, oh, finding out if there is life on other planets in our solar system represents a better investment of money than, for instance, buying T-shirts with pictures of NFL logos on them–something we typically spend about four times more per year on than we do on trying to learn about the universe.

Since we aren’t technically allowed to beat folks who complain about the cost of space exploration, hitting them over the head with this chart will have to do instead. (Figuratively! Figuratively! You can’t literally hit folks with it unless you, I don’t know, print it out and wrap it around something first. Which, as I mentioned, is technically illegal.)

Because, you know, spending money on perfume is way more important than finding out whether or not there is life not on this world.

38 thoughts on ““But why aren’t we spending it on CHILDREN? Think of the CHILDREN!””