As a kid, I never got a lot of exposure to all the usual Disney fairy tales. Most of what I know about them is through cultural osmosis; I know that Rapunzel has long hair, Sleeping Beauty had to be wakened by a prince, Cinderella is the one who ridea round in a gourd and is inattentive of her footwear, Bambi is the one whose mother got killed, and so on. But the finer details of the storybook princesses are largely lost on me; they're kind of a blur in my mind. One of them has something to do with a spindle, but I'm not sure which one, or why. I had thought that the poisoned apple was a Sleeping Beauty thing, but apparently that's not the case. Is Rapunzel part of the same story with Rumpelstiltskin in it? I'm not quite sure.

So when we walked into the theater last night, I was more nearly a blank slate than the average bear. I knew only the sketchiest outlines of the Snow White story–that it involved dwarfs and a mirror–but that's about it.

I am not, therefore, terribly qualified to speak as to whether the reboot is a better story than the original. I'm not quite sure about the whole scene where James T. Kirk almost runs his car into a giant canyon that has, for some inexplicable reason, opened up in the middle of Iowa, but…oh, wait, sorry, that's a different reboot I'm thinking of.

What movie was it I was going to talk about? Oh, right, Snow White. The one with the evil queen in it. (Aren't there other evil queens? I seem to recall an evil queen in Sleeping Beauty, at least. Or am I confused?)

Good Queen: I just pricked my finger on a rose that was growing out of season. That gave me an idea. We should have a baby!
Good King: lol wat?
Good King Okay.

The GOOD QUEEN and the GOOD KING have a CHILD, who they name PRINCESS SNOW CINDERELLA RAPUNZEL.

Good Queen: We will take care of this bird.

They TAKE CARE of the BIRD.

They RIDE OUT into BATTLE with the ARMY. The enemy SOLDIERS are made of GLASS and shatter when you hit them with a SWORD.

Good King: …
Good King: Well, that was easy.
Random Soldier: Sire, there's a paddy wagon here! With someone chained up inside it!
Good King: Wait, what? Who drags a paddy wagon into the middle of a battle?
Evil Woman Who Isn't a Queen Yet: Hi! I'm half-naked and chained up inside this wagon. Will you rescue me?
Good King: Oh, yeah! I've got just the thing to rescue you right here, if you know what I mean, and I'm sure you do. Let's get married!
Random Court Guy: Wait, what? What about your dead ex-wife? You know the good queen whose place in your heart could never be taken?
Good King: Who?

The Good King MARRIES the EVIL WOMAN WHO ISN'T A QUEEN YET, technically making her into the EVIL QUEEN.

Admiral Ackbar: It's a trap!

Good King: …
Good King: WTF?
Evil Queen: My ex dumped me on prom night. Now you will all pay.

The Good King DIES.
The Evil Queen opens the CASTLE GATE to let in her MARAUDING ARMY.

Princess Cinderella White: Prince from another castle, help me!
Prince From Another Castle: I will!

The PRINCE FROM ANOTHER CASTLE runs AWAY. The EVIL QUEEN and her BROTHER capture PRINCESS Snow BEAUTY and lock her in a CELL.

Princess Snow Rapunzel: Some really long hair or an enchanted talking candlestick or something would really be useful right about now.
Evil Queen: Mirror, mirror on the wall, who's the fairest of them all?
Magic Mirror: What, are you shitting me? You're Charlize Theron! You're like, one of the hottest people alive! You're definitely the hottest person in this movie. 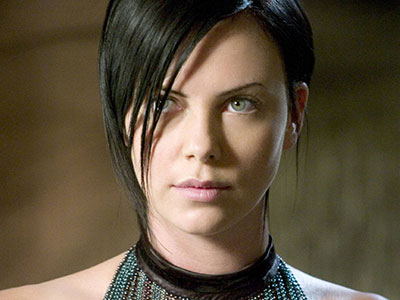 The kingdom goes to SHIT.

Castle Guards: Evil Queen, we captured these two people attacking our supply lines.
Evil Queen: You look just like the guy who dumped me on prom night.

The guy who looks just like the dude who dumped her on PROM NIGHT grabs a DAGGER and stabs the EVIL QUEEN.

Evil Queen: I sense a grave disturbance in the Force. Plus, I'm devouring more than my usual number of beautiful young women. And it took actual effort to use dark necromantic magic to heal my wounds and stop that dude's heart. Mirror, mirror, on the wall, what the fuck is up with that?
Magic Mirror: Your power is weakening because you keep reading Cosmo magazine and letting it suck away your sense of self-esteem. But there is a solution. Do you recall Princess Sleeping Cinderella Rapunzel Snow Beauty White?
Evil Queen: Is it her? Is she more fair than I?
Magic Mirror: Oh, hell no. But you must rip her beating heart from her chest…
Evil Queen: And eat it?
Magic Mirror: What? Eww! No. When it's time to renew your Cosmo subscription, send her heart to their subscriptions renewal instead of a check. They will never send you another magazine, I promise.
Evil Queen: Hey, brother, bring me Princess Snow Sleeping Cinderella from the tower!

Some BIRDS fly up to the window in the CELL.
Princess Sleeping Snow Rapunzel Beauty looks at them with INNOCENT WIDE-EYED WONDER.
The BIRDS show her a NAIL.

Evil Queen's Brother: Let's make out! And then I will take you to the evil queen to have your heart torn from your chest.
Princess Beauty White Sleeping Snow: No.

She STABS the EVIL QUEEN'S BROTHER with the NAIL and ESCAPES

Princess Sleeping Snow Beauty runs into the DARK FOREST, where she does SHROOMS and has a REALLY BAD TRIP.

Evil Queen's Brother: I am so not going in there. Let's find someone who knows how to go in there.

Some RUFFIANS start BEATING UP the HUNTSMAN.
The QUEEN'S GUARD grab the HUNTSMAN and drag him to the THRONE ROOM.

Huntsman: Bring my wife back to me.
Evil Queen's Brother: Are you daft? Nobody can bring back the dead. Oh, wait, I probably shouldn't have said that until after you handed her over to me, huh? Dammit, I always get that wrong.
Princess Cinderella Sleeping Rapunzel Snow: Take me to the other castle! I'm beautiful!
Huntsman: So's life.
Princess Rapunzel Sleeping In The Snow Next To Cinderella: I'm rich.
Huntsman: Rich?
Princess White Snow Beauty Upon Rapunzel's Brow: Rich, powerful… Listen, if you were to rescue me, the reward would be…
Huntsman: What?
Princess White Beauty Sleeping Snow Rapunzel: Well, more wealth than you can imagine!
Huntsman: I don't know, I can imagine quite a lot.

Princess Snow Sleeping Cinderella and the Huntsman RUN AWAY, pausing only long enough to have a sort of irrelevant and not terribly coherent encounter with a TROLL, which RUNS AWAY when Princess Sleeping White Snow Beauty LOOKS at it with INNOCENT WIDE-EYED WONDER.

Women In Boats: We will help you.
Huntsman: I see you're into ritual scarification.
Women In Boats: We make marks upon our faces to make us less fair, so that the Evil Queen will not suck away our life-force with dark necromantic magics. She only does that to the fair.
Huntsman: Wait, what? Isn't fairness subjective? I mean, there are totally people who are into body mods and scarification. How do you know the Evil Queen isn't one of them? I mean, do you see the way she dresses? You can't tell me she's not into some kinky out-there shit.
Women In Boats: We had not considered that. Oh fu–

The QUEEN'S TROOPS attack the WOMEN IN BOATS. Everybody RUNS AWAY.

Princess Beauty Snow Falling Sweetly On The Heaving Bosoms Of Rapunzel And Cinderella: Well, that sucked.

They are CAPTURED by SEVEN DWARVES. 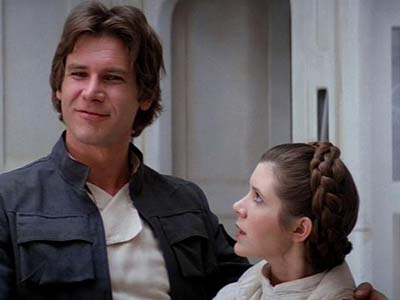 The Evil Queen's guards APPEAR. They all RUN AWAY to an ENCHANTED FOREST.

Princess Rapunzel And Cinderella Lying Spent And Sweaty In The Snow: What is this place?
Seven Dwarves: The Enchanted Forest. Don't snort any of the fairy dust.

A pair of FAERIES climb out of some BIRDS like the Alien CHEST BURSTER in the first ALIEN movie and beckon to PRINCESS CINDERELLA IS TOTALLY SLEEPING WITH RAPUNZEL. She looks at them with INNOCENT WIDE-EYED WONDER and FOLLOWS THEM.

A WHITE STAG with a TREE growing out of its HEAD approaches PRINCESS RAPUNZEL WHITE BEAUTY SNOW, who looks at it with INNOCENT WIDE-EYED WONDER.
The WHITE STAG gets shot with an ARROW and turns into a FLOCK OF BIRDS

Hawkeye: Oops, sorry, my bad. I was shooting at a space monster over in the next theater.

The Prince From Another Castle: Heya! I'm back! Didja miss me? I'm sorry I let you get captured and locked up in a dungeon for most of your life.
Princess White Falling Snow Caressing The Lithe Nude Bodies Of Rapunzel And Cinderella: S'okay, we're cool.

One of the DWARVES gets SHOT WITH AN ARROW.

Dwarf who got shot: Message for you, Princess.

The dwarf who got shot DIES.
The Huntsman kills the Evil Queen's BROTHER.
They all run AWAY.

The Prince from the Other Castle: Here, have an apple.
Princess Sleeping Between Rapunzel And Cindarella In The Beautiful White Snow: Okay.
Evil Queen: It's a trap! Plus, I'm not really the prince from another castle!

Princess Sleeping Snow White Because She's Totally Been Poisoned goes into a COMA.

Huntsman: Um, you do know I'm not a prince, right? I was just hoping for some nookie.
Princess Sleeping Snow Rapunzel Cinderella Beauty: I know. I've been awake all this time. I just didn't want to give him the satisfaction. He left me to rot in a cell for most of my life, after all.
Prince From Another Castle: Wait, I thought we were cool about that.

Princess Sleeping Rapunzel Beauty Snow: Let us ride into battle against the Evil Queen's castle!
Tank: So what do you need? Besides a miracle.
Princess Beauty Snow Sleeping White: Guns. Lots of guns.
The Duke: Have fun storming the castle!

Seven Six Dwarves: We can sneak into the castle and raise the gate.

Seven Six Dwarves: Why is that funny? We're miners so we're strong as hell, we're able to fit through spaces that the Evil Queen won't anticipate and likely hasn't defended, we know how to work together in dangerous situations, we've been working as brigands for the last ten years, and her guard is probably mostly poorly trained men-at-arms. Is this supposed to be funny just because we're short? Do you fuckers have any idea how offensive that is?
Tyrion Lannister: You tell 'em, yo.

The Seven Six Dwarves sneak in through the JEFFERIES TUBES, kick ASS and raise the CASTLE GATE. The audience LAUGHS.

Me: This movie would have been so much better if the soundtrack had been done by Evanescence.
Evanescence: Inorite?

30 thoughts on “Movie Review: Snow White and the Huntsman”