A while ago, I received a spam email. The email came from an obviously hacked attack, and contained nothing but a Web URL.

This usually means either a phony pharmacy spam or a computer virus. Since I am interested in these things, and since I keep virtual machines with redundant backups so I’m not too concerned about malware, I followed it. It lead to a GoDaddy site which redirected to a PHP redirection script living on a hacked Web site which led in turn to a fake antiviurs page–a page that throws up a phony virus “warning” and prompts the mark to download an antivirus program to “fix” the problem. The supposed “antivirus program” is, of course, actually malware. Pretty run-of-the-mill stuff. I reported it to the Web hosts and moved on.

Then, a few days later, I started seeing Twitter posts that were just a URL. These posts led to a hacked site…which led to the same redirector, which then led on to the same malware sites.

I did a Google search. Just one of the hacked sites, an Indian site called , had over 257 **MILLION** mentions on Twitter, which some quick investigating shows were coming from at least 500,000 Twitter accounts that were being used to blast the URL far and wide. 257 million searchable mentions for just a single attack URL!

This is a huge scale attack, flooding Twitter with hundreds of millions of mentions of hacked Web sites that in turn redirect to a traffic handler which then sends visitors on to computer malware.

I did some more investigating, mapping out the patterns of redirections, visiting the sites again and again with my browser user agent set in different ways, watching what happened. After a while, I was able to build a map of the attack, which looks something like this:

And I found some really interesting things.

I made a list of hacked sites that are being used in the attack by looking at Twitter accounts that were advertising the link to , one of the first hacked sites I discovered. I found lots of hacked sites, each one of which redirects to , which then goes on to the malware sites.

WARNING *** WARNING *** WARNING
The sites and URLs mentioned in this post are live as of the time of this writing. They do lead to malware sites and they will attempt to infect Windows computers with malware. Do not visit any of these URLs from a Windows machine if you don’t know what you’re doing.

A partial list of hacked attack domains I have put together includes:

I looked at the sites, and discovered something very, very interesting: Of all the sites being advertised on Twitter, all the hacked sites that redirect to computer malware, nearly every single one advertises that it was created by the same Web design firm: an outfit called “” located in India.

Look at the footer of each of the hacked sites and you’ll probably find something like this:

In fact, one of the hacked redirection sites is , which redirects (through a different traff-c-handling intermediary) to the same malware domains. And appears to be the billing system of .

Either way, their Web sites are being hacked and used to host redirectors which redirect to a traffic handling script, also living on a hacked server, which then redirects to many, many malware domains.

The malware domains themselves appear to be living on the same hosting company, an outfit called located in Kurumsal, Turkey. These sites change all the time; as I’ve been tracking the network, they change sometimes hourly, popping up and then disappearing. The traffic handler script is updated frequently, sometimes hourly, to point to whichever malware dropper the folks responsible for this network want it to.

When I started writing this post, all the malware sites in the diagram above were live; as of right now, about an hour and a half later, at least two of them are no longer resolving. The Whois information for the malware sites looks like this:

(the ADMIN and TECH contacts are the same)

So that’s how the network works. Now let’s look at one of the attack domains.

I have been probing the network using wget (to map out the redirectors) and an isolated copy of Safari with various user agent headers (to see how the malware sites work).

If you visit any of the malware sites using a browser that advertises itself as not being Windows-based, you are presented with a message in broken English, “We have not mobile version yet, please revisit us from Windows OS”:

On the other hand, if your browser user-agent advertises itself as a Windows browser, things are different. First, the site’s window shrinks, and this JavaScript alert pops up.

The window then expands to fill the entire screen, and a phony “antivirus scanner” starts to run. 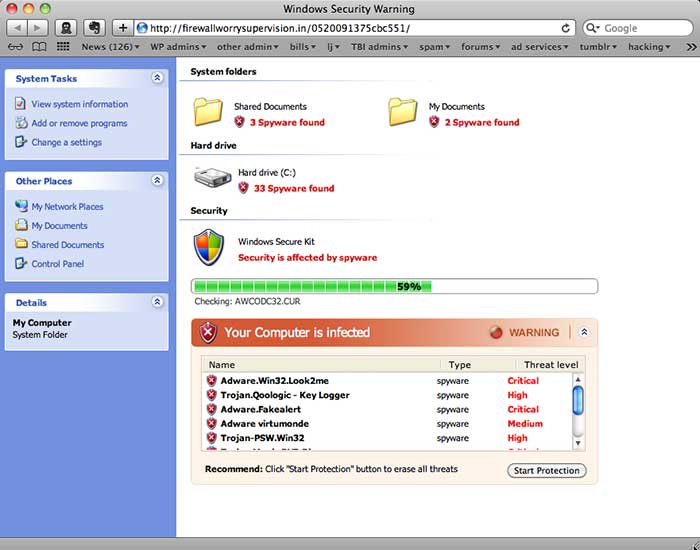 After a few seconds, a fake graphic that is supposed to look like a Windows dialog appears: 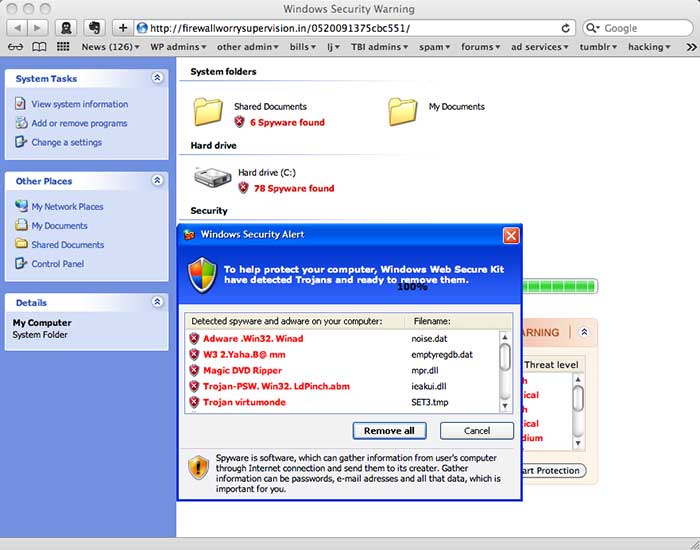 Needless to say, all of this is fake. The graphic in the center isn’t a window, it’s just a picture. At this point, any attempt to click on any part of the browser window triggers the download of a file named “setup.exe” which is, of course, malware.

An Indian Web design outfit called “crazypencilz” appears to either have been hacked and had its client list compromised, or to be a rogue company that uses its clients’ sites as part of a malware spreading network.

Users who click on these URLs are redirected to a traffic handler Web site. The most common one I’ve seen is hosted on , but there appear to be others as well.

I have notified the Web hosts that play into this scheme of the sites, to no effect. The GoDaddy redirector that first tipped me off is still active, after days and repeated emails to GoDaddy. Emails to the hosts of the hacked sites have gone unanswered, as have emails to the host of the redirector site. The malware sites are disappearing quickly, but I can’t tell if that’s because the host is moving against them or the site’s owners are changing the malware attack domains rapidly to try to avoid detection and blocklisting.