Recently, Microsoft’s PR department cobbled together a whizbang vision of our technological future, as seen through the lens of Microsoft’s ideas about technology and man/machine interface.

It’s a remarkable bit of work, though likely not quiiiiiite for the reasons Microsoft might think. If you haven’t seen it yet, here it is–it (kind of) requires sound and is safe for work, unless perhaps you work for Google or Apple.

Now, a few things struck me when I watched this video.

Not just the sterility of it, or the fact that in Microsoft’s future we’re all upper middle class, or the fact that nobody actually talks to anyone else. Those things are all true, I suppose, and reflect Microsoft’s corporate identity as a painfully introverted, socially awkward, borderline-autistic Lex Luthor, as befits its founder and cultural leader Bill Gates.

No what struck me as I watched this video was the fact that there are no disruptive technologies. Everything here is just an evolution of tech we already have. 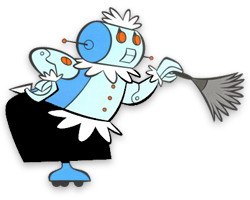 Displays mounted on walls, instead of displays being walls. Handheld cell phones with 3D screens, instead of completely virtualized input and output (say, contact lenses with 3D displays). “Computing devices” being distinct entities from other devices. Cars that have displays embedded in their windows, rather than cars whose windows–or paint jobs!–are displays. And everywhere swipe, swipe, push, and swipe.

It reads to me as if Microsoft in 1982 had released a version of the future where keyboards are really thin and we all type commands into command prompts in glorious 24-bit color instead of using GUIs…you know, rather like Linux users do today.

When I look at this video, what I see is the Jetsons. Remember the Jetsons, the cartoon that told us that the future would have us living in glass-domed pods floating in the air, but that gender roles and social norms would still be just like they were in 1959? In the Jetsons future, instead of making robotic vacuum cleaners, you make robotic maids that push regular vacuum cleaners around.

Now, I get it. Disruptive technologies are, by their nature, hard to predict. Visions of the future always end up getting it wrong, sometimes in ways that look silly.

But man, Microsoft isn’t even trying. To them, the future is just like the present, only longer. What’s missing from their vision isn’t just imagination; it’s humanness. It’s a sense of how people use technology, and how the street finds its own uses for things.

To me, that, more than anything else, is Microsoft’s failure.

26 thoughts on “Microsoft’s Future: Just Like the Present, Only More”