I usually work from home.

This has its good bits and its bad bits. The bad bits include clients who don’t pay on time, not having health insurance (the United States as a society has decided that we want to discourage innovation, prevent people from taking risks, and stifle small business, and one of the ways we do that is to tie health insurance to employment, so self-employed people find it expensive and difficult to get), and higher taxes (the legions of the self-employed pay more for FICA than folks with normal office jobs do, and don’t even get me started on the fact I pay more corporate income tax than General Electric).

The good bits include the ability to work from anywhere I have an Internet connection, which in the age of smart phones and tethering pretty much means anywhere that isn’t Antarctica or the Libertarian paradise of Somalia, and I can work in my bathrobe.

Which is not to say that I was traveling in my bathrobe; that might’ve presented certain awkwardnesses. Instead, it meant that I was free to travel to Boston in the first place, with my clients none the wiser.

Day three on our journey began with some tension in our little group, which corresponded, through a matter of unfortunate timing, with a client who needed my attention. We left Denver, Erica behind the wheel and me behind the 8-ball on a rush urgent problem for a client, which the client thoughtfully neglected to inform me about until it was a rush urgent problem, the better to get the blood circulating in the morning.

The problems worked themselves out by the afternoon, as we sped through the scenic heartland of Colorado toward Kansas.

I’m not quite sure why they call the midwest “America’s heartland.” I think it has something to do with arteriosclerosis. Or maybe it’s because of all the corn, which is processed into high-fructose corn syrup that is then distributed to children in order to promote diabetes and heart disease, I don’t know. Whatever the reason, it certainly isn’t because the landscape is so interesting that it warms the heart.

After many hours of driving, we were ready for any diversion whatsoever to break the monotony. So when we neared the border and saw signs for the Wonder Tower, we were primed–nay, more than primed–for a little wonder.
The Wonder Tower bills itself with the promise that its visitors can “SEE 6 STATES!” 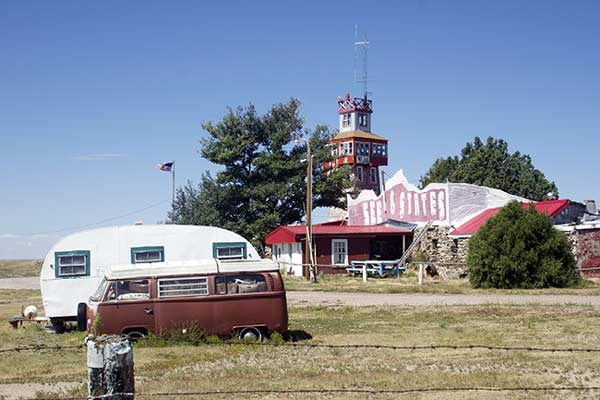 I’m not sure which states this tower allows one to experience. I suspect they’re Ennui, Tedium, Boredom, Lassitude, Apathy, and Monotony, but we never had the opportunity to find out; the place seemed utterly abandoned.

Fortunately, there was a vast field of millet nearby, which offered the opportunity for some frolicking. Claire mentioned, in a casual, offhand way, that she had a Viking helmet with her, and the deal was sealed. 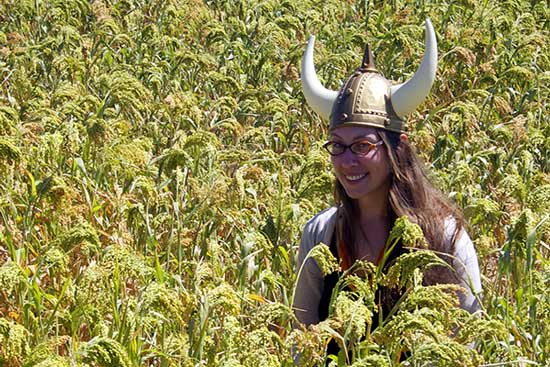 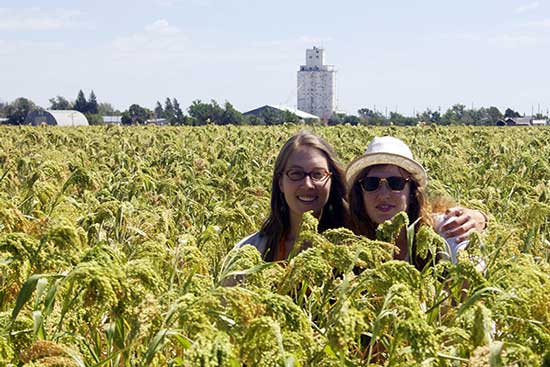 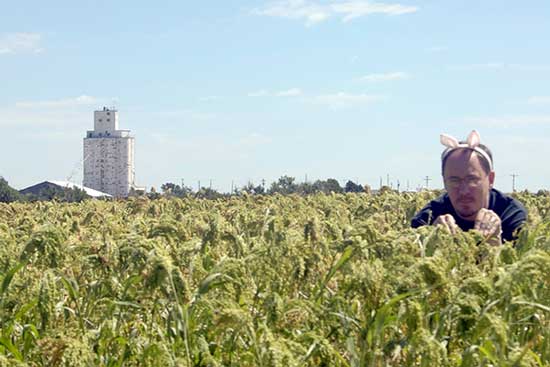 Frolicking done, it was time to head into Kansas.

If there’s one thing that can be said about Kansas, it’s that it’s boring. There is nothing there. At all. Anywhere. When we crossed the state line, the scenery looked like this: 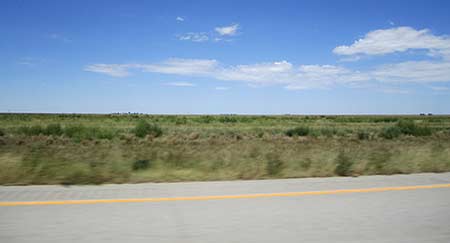 After a few hours of travel, the scenery looked like this:

A couple hundred miles farther along, the scenery gave way to this:

In the face of such tedium, even the boldest must falter.

Fortunately, we live in an industrialized society, in which we pledge fealty to our corporate feudal lords in exchange for mountains of debt, an existence that’s little more than grinding pointlessness, and iPads. And the nice thing about iPads is for just a little bit more debt, we can listen to audiobooks. Audiobooks! They’re like books, without all that business of reading!

Claire had a copy of Bill Bryson’s marvelous A Short History of Nearly Everything with her. If you haven’t read it (or listened to it), I can’t recommend it enough. It starts with the creation of the universe and along the way covers physics, chemistry, cosmology, paleobiology, geology, archaeology, and the rise of civilization, with several segues into the lives of some of the most famous scientists who ever lived. It proved to be a refreshing antidote to the soul-scorching tedium outside.

The book discusses, with some amusing side notes about archaeological fraud, the subject of our genus, and our closely related but now long-dead family members such as Homo habilis and Homo erectus.

One of the points the book makes is that evolution isn’t goal-directed. We seem to think, with the conceit of an anthropocentric worldview, that the rise of tool-using, LHC-building, iPod-listening intelligence is an evolutionary inevitability; after all, evolution is all about the formation of better (stronger, faster, smarter) species from lesser species, right?

Well, err, wrong. In fact, quite a number of paleontologists reckon that, far from it, if you were to rewind history just a little bit–say, to H. erectus–and let it go again, sapience might never occur at all. It seems that the explosion of our enormous, radically accelerated, tool-using, Lady-Gaga-listening intellect depended on such an unusual confluence of events and genetic steps that given the history of the world all over again, it might never happen again.

Which suggests an answer to the Fermi paradox.

The Fermi paradox is pretty straightforward. There are billions of stars in our galaxy, and billions upon billions of galaxies in the universe. Given how rapidly and tenaciously life arose and spread on this planet, it seems quite likely that life is extraordinarily common in the universe. In fact, recent discoveries of life in deep-sea hydrothermal vents, life in arsenic brine, and life that can survive exposure to the vacuum of space without ill effect, most estimates of its prevalence are probably on the low side; the physical world suggests that not only does life spring up wherever it can, but the “wherever it can” covers a lot more territory than we imagine it does.

So where are all the extraterrestrial civilizations?

Even if you grant that relativity is forever an immutable law of physics that no science or technology can violate, and that the vast gulf between stars means that other species will never, ever visit us, where are they? We should be able to hear their radio chatter at the very least.

The problem is in the notion that because we exist, we must have been inevitable. I suspect, and that suspicion has become even stronger, that life may be far more common than we think it is, but sapient life is far less common than we think it is. Not only is our prodigious intelligence not inevitable, but far from it, it’s actually extraordinarily rare. There is nothing in the competition of self-replicating molecules to suggest that sapience is a common strategy, and indeed, quite a lot of evidence (given how new we are on the scene, how long the world got by quite well without us, and how we happened so quickly there’s still no evidence to suggest intelligence betters a life form’s long-term odds of success) that it is not.

Such are the thoughts that filled my head while we sped through Kansas. Fortunately, it was not long until we encountered signs for the World’s Largest Prairie Dog…but that tale will have to wait until next time.

1 One quick and dirty test: If the first thing that springs to mind when you hear the word “evolution” is “survival of the fittest,” you probably don’t really grok evolutionary biology.

12 thoughts on “Boston Chapter 3: The Wonder Tower and Fermi’s Paradox”