With the trip to MacWorld far behind and the seedy motel suite in Seattle still some distance ahead, I turned my focus to the notion of a brainwave-controlled sex toy with a singleminded determination that I set aside only temporarily when lapis-lazuli suggested that she might be able to make a trip up to Portland to visit me.

Okay, that last sentence is a lie. I don’t approach anything with singleminded determination; I usually have at least three things going on my mental plate at any one time, and even those can often be derailed by–oh, look, potato chips!

Ahem. Sorry, where was I?

Oh, yes. Singleminded determination. I focused a part of my attention on the notion that it might be possible to make a sex toy work by brainwaves, in a sort of “Hmm, I should look into this more!” kind of way. I exchanged a few emails with the person who knew someone I knew on Twitter, and we both sorta thought “Hey, maybe this idea has potential,” and that’s where it sat when lapis-lazuli said “Hey, I really liked meeting you in San Francisco; how ’bout if I come up for a visit?”

To which I said “Gee, that would be swell!” and off she went.

lapis-lazuli writes fiction. Sometimes, she writes sexually explicit fiction. She also has a wonderful sexy reading voice, so it came to pass that on a particularly interesting evening when she was up visiting, she started reading one of her published stories to me. Then she started doing…err, other things while I continued reading the story myself.

There came, however, a moment in the story in which one passing character made an offhand remark to another passing character, and for some reason, I thought of the lady who says “But I don’t like spam!” in the Monty Python Spam skit. And read the line out loud that way. I definitely think that she should do the same thing if she is ever called upon to read that particular story for an event of some sort, because who doesn’t like a MOnty Python reference embedded in their pr0n?

One of the many things I love about Portland is Science Pub, hosted frequently by the Oregon Museum of Science and Industry, and more specifically by a friend of mine upon whom I’ve been harboring a mad crush for quite some time.

Science Pub is an awesome idea. Invite speakers on a wide range of science-related topics, get an audience of a few hundred into a bar, drink beer (or not, if you’re me–never could stand the stuff), and geek out. It’s hard to describe in mere words how much win and awesome it is.

As it turned out, the Science Pub while lapis-lazuli was in town was on the subject of music and brain development. And as it also turned out, lapis-lazuli‘s college background is in music theory and neurobiology. Put those things together, and it turned into quite an epic win.

Well, except for the bit where we left the pub and discovered that the car battery was dead. But, y’know, you have to break a few eggs if you want to make an omelette. Or, err, something.

The next day, there were pictures. 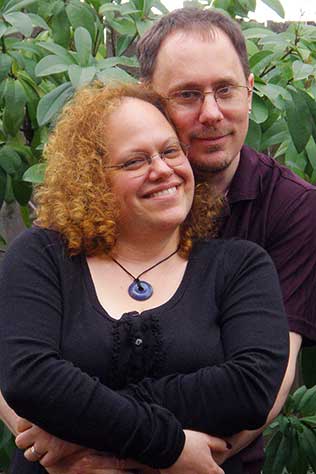 12 thoughts on “Sex for Science! Interlude: Snogging and such”