On a mailing list I belong to, there have recently been some…skeptical opinions expressed on the value of Mountain Dew, that carbonated yellow liquid joy in a bottle. So I would like to take this opportunity to set the record straight. 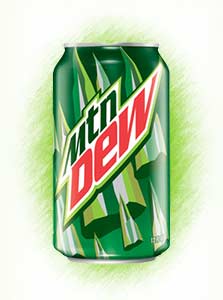 The day’s very first hit of Mountain Dew is one of life’s sweetest, most precious treasures. It’s best taken from a one-liter bottle, you see, for at the moment the bottle is opened, some of the carbon dioxide begins to escape. This causes an ongoing and irreversible process by which the carbonic acid formed by the dissolved gas is converted into water and carbon dioxide, altering the pH and therefore the taste of the drink.

The ratios of the volume of liquid in the bottle to the volume of airspace in the bottle determines, in part, the equilibrium point of the reaction, in which carbon dioxide plus water < - > carbonic acid; the taste of the first sip is subtly different in a 12-ounce can, a 20-
ounce bottle, and a liter bottle, as the reaction has a slightly different equilibrium point in each case.

As caffeine delivery systems go, Mountain Dew is unparalleled in the history of humankind’s artifice. If God Himself came down off of Mount Sinai and commanded His people to mainline heroin directly into their eyeballs, it would not be as good as Mountain Dew.

There are other, lesser caffeine delivery systems, of greater or lesser degree of foulness as is their nature; a nice, deep, black tea, strong and lightly sweetened, is good, for example, whereas coffee is nearly as foul as drinking directly from the slag-pits of Mordor with a tar and asphalt chaser. Mountain Dew, though, belongs firmly in a class above all others, where it looks down on other, more pedestrian beverages the way a kind and benevolent madam looks over the girls in her brothel, even the wayward ones who sometimes show up to work late and smelling of coffee. Or the slag-pits of Mordor.

So now you know.