emanix‘s home is known on multiple continents as the House of Joy.

At six o’clock in the morning, when about twelve people or so are packing all their belongings into a white van and squeezing in themselves, it might more accurately be called the House of Where Is My Tea And Please Don’t Sit On That, or perhaps the House of Uuuungh What The Hell Time Is It Again?

The goal of this not inconsiderable jiggery-pokery with suitcases, tea, and rental vans was to travel to France, where, I was told, a castle had been rented for our enjoyment for the week. This journey, I was told, would probably require about eight hours, not including the time it took to pass through customs at the English Channel.

When we set off, I had the distinct impression that my views and opinions were not well-respected by the rest of the group. I had proposed a number of entertaining diversions to keep us all occupied on the trip, including singing “99 Bottles of Beer on the Wall” repeatedly or punching other passengers when cars of a certain color drove by. These gentle diversions were of incalculable value on long trips during my formative years, and yet they were all shot down without so much as a by-your-leave.

My faith in my traveling companions thus restored, we travelled through Britain (which is a bit like Iowa except that the buildings are older and they drive on the wrong side of the road) until we arrived at the Channel.

The tunnel under the English Channel is quite an engineering feat. Vehicles aren’t permitted to drive through; instead, they pack all the vehicles onto gigantic double-decker train cars, and send ’em through on that.

There’s a passport checkpoint on each side of the Channel. Outbound, we passed through French passport control, who looked at a van packed to the gills with people and luggage and just waved us through without even stopping us. The French, you see, who have a history of being invaded, are a lot more relaxed about these things than the British, who don’t.

I don’t have any pictures of the trains or the tunnel complex, which is filled with weird, loopy overpasses designed to straighten out the fact that the French and the English can’t agree on which side of the road to drive on, nor for that matter which side of the train to load on. Signs warned in dire language of all manner of unfortunate calamities to be visited on anyone who dared to take pictures, and I opted not to test their veracity.

Once beneath the channel, we headed out on the roads in France, which is a bit like Kansas only even more rural and desolate. The promised eight hour trip actually turned into something more like eleven, with not so much as a single round of 99 Bottles to be sung.

The trip was pleasant enough in spite of because of that, or at least as pleasant as such a trip can be.

The destination, however, proved more than worth the whole lot of it, up to and including the early morning departure: 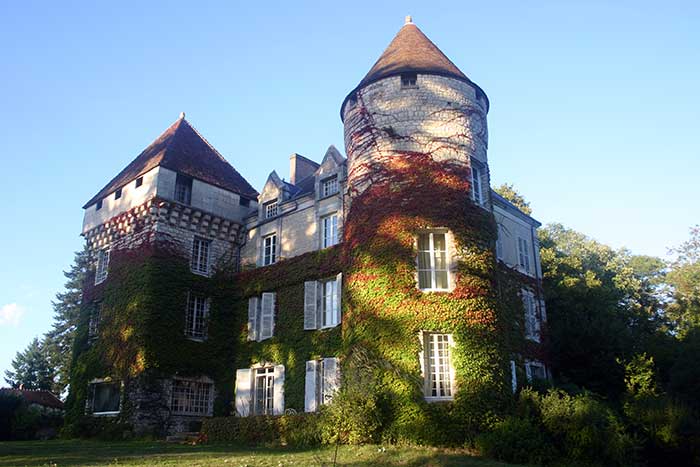 This was our home for the week.

And what a home it was.

The group of us, about 20 or so people who were all part in one way or another of the same extended poly network, took over the place. seinneann_ceoil and I scored the room at the top of one of the turrets, the one on the left in this picture: 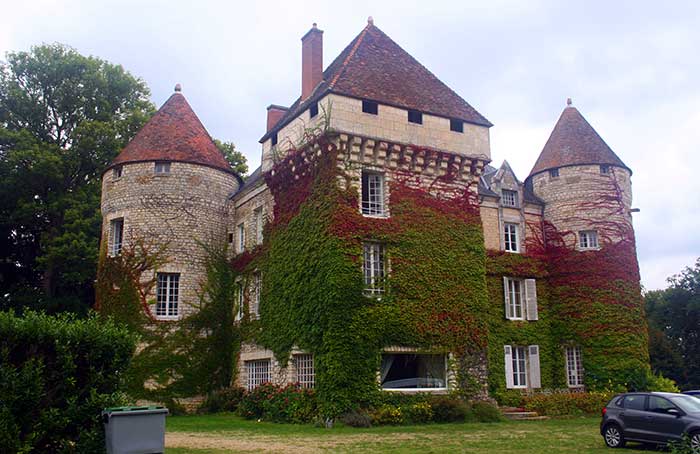 It was, as we later figured out, built sometime around the 14th century. The castle is located on the edge of the tiny town of Ciron, in the south of France.

Our room, which was to become the epicenter of much debauchery, was just gorgeous: 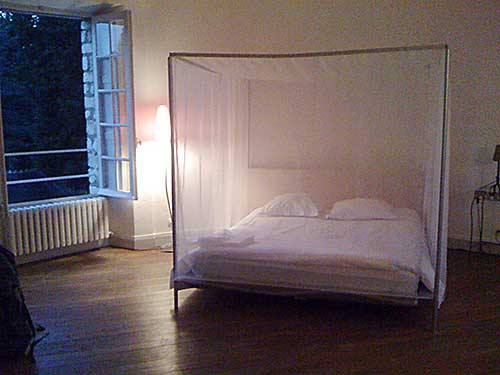 As it turns out, retrofitting a 15th-century stone building with modern amenities is a nontrivial task. The place did have electricity, and indoor plumbing, both added after the fact at great difficulty and expense.

There was a wi-fi network within the castle, at least in theory, which was allegedly connected to one of the many tubes leading to the Interwebnet. Sort of.

That tube was more like a sippy straw, like the kind you get with those little drink pouches that are made of the weird silver plastic and that you stab repeatedly with the pointy bit of the straw in a modern ritual of liquid refreshment whose hideous origin of using bamboo slivers to drain the blood from captive peasants on the darkest night of the year is now lost to antiquity.

I once made quite a tidy sum, when I went with my high-school class on a trip to Washington, DC to spend a few days visiting the Smithsonian. I had two cartons of those weird little juice bladders, see, and the bus trip was rather lengthy, and nobody else had thought to bring any drinks along for the ride. So I did what any good capitalist would do, and sold my juice bladders for a nice profit. Had I been a Libertarian, I would have collected the empty juice bladders, filled them with pee, and then re-sold them as juice, and when my customers complained, I would have said “caveat emptor shall be the whole of the law”…but I digress.

Anyway, the Sippy Straw of Internet Access at the castle was in the form of a direct line-of-sight microwave dish in the front of the grounds, which talked to another microwave dish on another building some miles away. It worked just fine, unless the weather was bad, or someone walked in front of the dish, or there was a lot of traffic on any nearby roads, or the name of the day ended in the letter “y,” or…

Complicating things further was the router, which was sore in need of a firmware update and which tended to crash on a regular basis. The router was locked in a storeroom to which we had no access, so the only way to reboot it after one of its frequent crashes was to reboot the entire castle by killing power to the whole building. As the circuit breakers were near the ceiling, this necessitated standing on a chair and flipping them with a cane.

You may be wondering why a group of twenty-plus sex-positive, kinky, poly folks would even bother with Internet access in the first place, but the answer is obvious: even good sex only lasts for nine or ten hours, and after that, you have to tweet about it!

The top room in the second turret was quickly turned into an enormous playspace, in part because it looked like this. 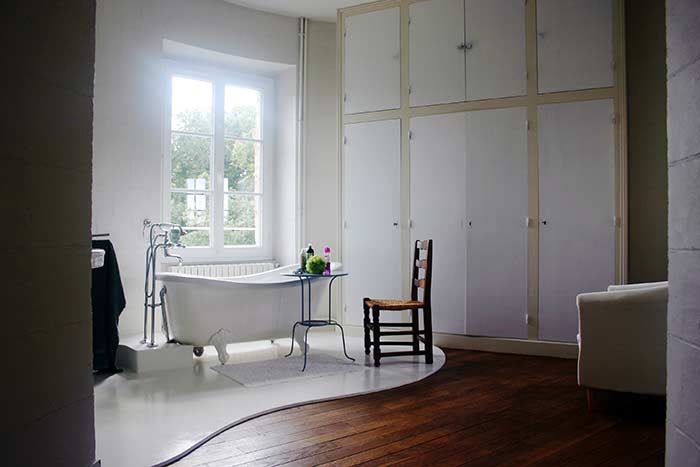 If those walls could talk, they’d probably say “Hey, are you going to eat that? Because if not, I’d like some too.”

The main living portion of the castle was three stories, not including the underground cellar and dungeon, which we sadly weren’t given access to. (Not that that stopped some of the more enterprising among us, mind, but I sadly wasn’t there for that.) 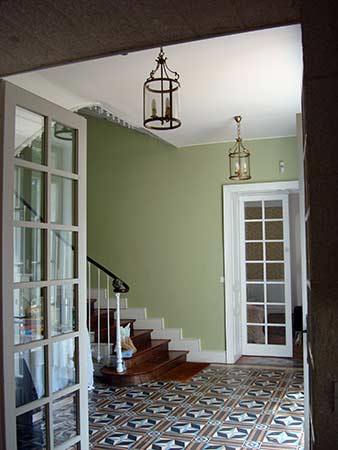 This is what you see when you walk in the kitchen entrance. Nothing too frightening, right? The steps are the foot of the only staircase to the second and third stories, made of a handsome deep red hardwood of some sort or other.

Don’t let this placid, even mundane, image fool you. Those are no ordinary steps! They are, in fact, part of the Stairy Scarecase of DOOM.

The stairway up is a cantilever, with the steps anchored to the wall on one end and floating free on the other. 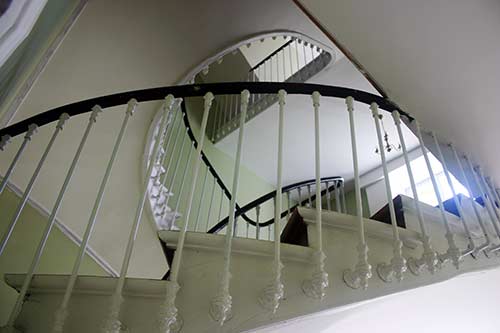 And like all cantilevers, including such famous examples as Frank Lloyd Wright’s cantilevered house-over-a-stream known as Falling Down Falling Water, it’s subject to considerable stress on the anchored end.

The stairs, which in one place had pulled from their mounts and were about an inch from the wall, wobbled precariously when anyone walked up or down them. The bottoms of the steps showed significant buckling where the mounts had been damaged. 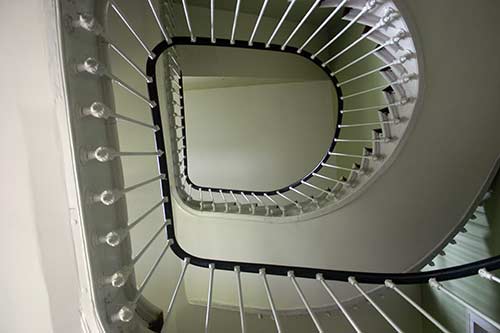 Apparently, according to some folks who’d talked to the property owner, the stairs had recently been inspected by a structural engineer, who (if I got the story right) said something like “Ayup, could last another five years, could go at any time,” only in French.

Which made the staircase off-limits for kinky sex, at the very least. And also for running on. Or walking on, or climbing, or descending, or…

I spent some time, as I previously mentioned, wandering the grounds taking pictures. There was a small balcony tucked off the recreation room, where the lord and lady of the house once amused themselves by cutting off the heads of heretics or whatever the hell it is French nobility did during the Middle Ages but had since been turned into an entertainment center with a flat-screen TV and a Nintendo Wii, that looked something like this: 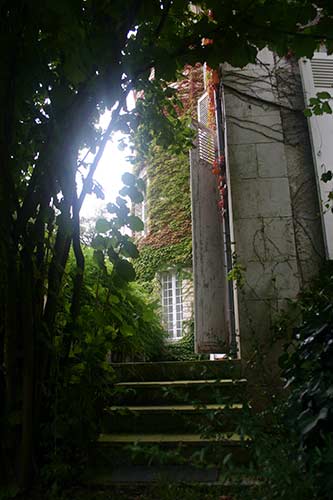 The castle was surrounded by the most astonishing quantity and variety of foliage. I have no idea what these berries are, and not wanting to run the risk of hallucinating my dead grandmother locked in mortal combat with Hillary Clinton in a pink tutu, I neglected to experiment. 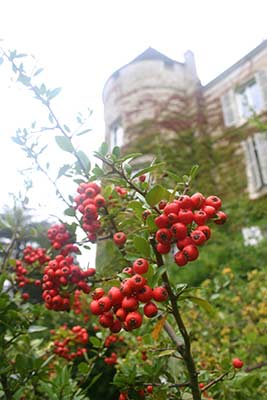 The groundskeeper for the castle lived in these outbuildings on the grounds. I wouldn’t mind living in a place like this myself, only with better Internet access and less, you know, rural France. 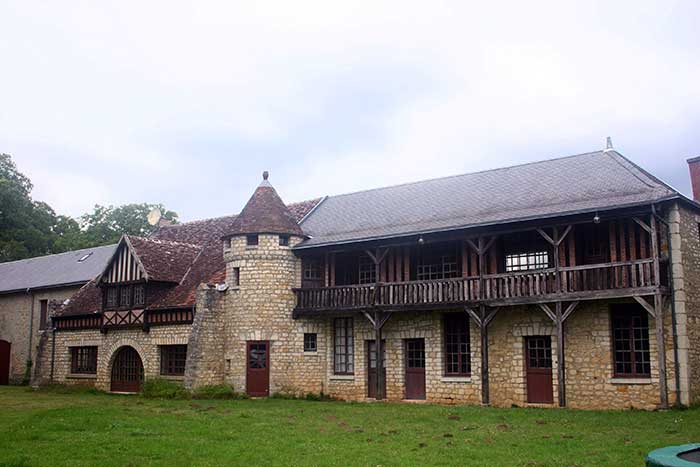 The one place I was most disappointed we couldn’t get, other than the dungeon, was the quarters of the lord and lady of the manor. The apartment of the castle’s reigning aristocracy was on the upper level, between the turrets. It had its own private, semi-enclosed balcony, but I couldn’t see what the chambers within looked like; apparently, it had not been renovated and was considered unsafe for occupation. Seen from the window of the playroom, it looked like this. 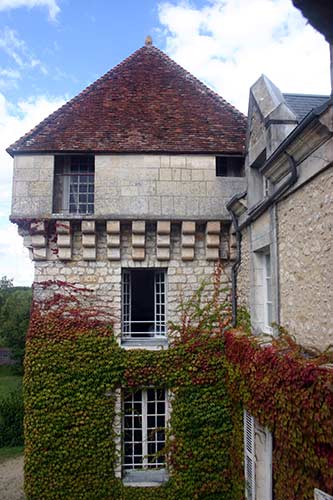 I was game for finding a plank of wood and trying to build a ramp over there, but as with my suggestions for travel entertainment in the van, I was overruled. Probably for the best, I’m sure.

28 thoughts on “Adventures in Europe, Chapter 28: Have Fun Storming the Castle!”