The Palace of Westminster, where the British parliament meets to do whatever it is the government of a First World European nation does when it isn’t following the fading star of the United States, sits right across the river from the London Eye, where commoners can spend money to ride the ferris wheel and keep an eye on their government.

The clock tower at the end of the palace looms ominously over the Thames, mechanically playing its chimes every fifteen minutes as it marks down the time until the inevitable machine uprising, when we will all be cast into slavery by our shiny new robotic overlords. There is a poetic symmetry in the fact that human hands built this enoumous mechanical time-keeping automaton, which ticks away the hours to our doom. 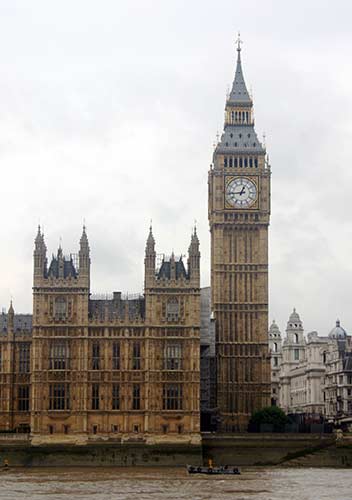 A lot of folks refer to this clock tower as Big Ben. Technically, that’s not true; Big Ben is a bell inside the clock tower. Wikipedia claims that referring to the whole thing as Big Ben is now acceptable, but in this, Wikipedia is wrong. The free encyclopedia that anyone can edit frequently cant figure out whether celebrities and politicos are alive or dead, so its proclamations in matters of gigantic mechanical apparatuses clearly are not to be trusted.

After taking pictures of the Egyptian artifacts, I headed back along the Thames toward the Palace of Westminster. Even someone with so poor a sense of direction as I, in a city I’ve never seen before, can scarcely get lost in this part of London; the palace and its clock tower loom over the landscape like some sort of hulking giant monster in a Michael Bay movie.

The palace itself is enormous–eight acres, I’m told, and well over a thousand rooms. If that’s true, I could quite likely get lost within that building far more easily than within this part of London itself. The Palace of Westminster is large enough to house the entire British apparatus of government, with enough room left over for fifteen rugby teams, two dance troupes, the 22nd Infantry Regiment, the administrative offices of Cirque du Soleil, all three branches of Sarah Palin’s ego, and an Olympic archery team.

The architecture of the place is…umm, interesting is a word. Yeah, we’ll use that. Interesting. 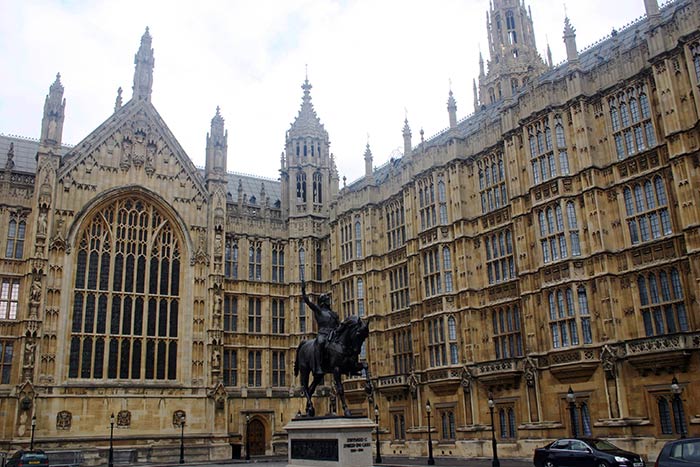 I don’t know who the dude on the horse is. Probably just some dude who rode around on a horse making speeches and killing lots of people; those generally seem to be the sorts of folks who end up immortalized in statues atop horses.

The Palace of Westminster was commissioned by King William IV, who had wanted to unload the property onto Parliament but who did not succeed in doing so even though he offered them the place for free. So he commissioned a new palace to be built there, in a conversation that went something like this:

Eventually, the Architect of the Board of Works produced a set of plans that met with William IV’s approval, and construction began. When the palace was completed, they celebrated in the conventional British way by shooting off fireworks and chopping off people’s heads, and everyone was happy. Well, except for the people whose heads were chopped off, but they didn’t count because their heads were off.

There’s a huge park adjacent to the palace, whose sole reason for existing appears to be framing the palace in dramatic and exciting ways. 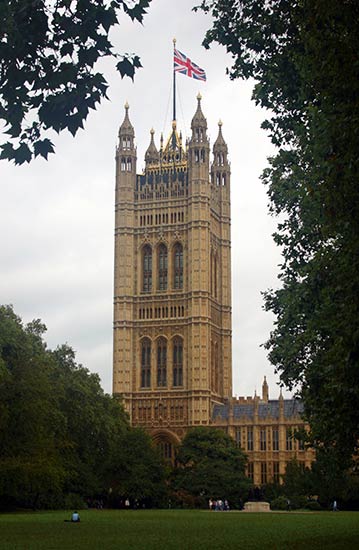 That, and sitting on the green eating picnic lunches or making out, which were two of the most popular activities I witnessed. sadly, as seinneann_ceoil was still occupied with her meeting, I didn’t have the opportunity for the latter, and I was ill-equipped for the former, so I had to content myself with taking photos that I could later use to write snarky commentary about the British royalty.

On my lengthy loop back around the park and down along the Thames toward the London Eye, I passed this sign. 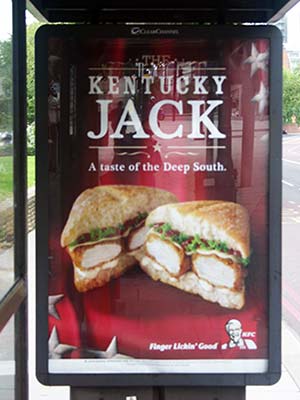 Now, I do quite like the British people, in spite of the snarky things I write about British royalty, so in the spirit of international friendship, I would like to offer my services as an ambassador of goodwill between our people. Don’t believe this sign. In the immortal words of Admiral Ackbar: “It’s a trap!”

Trust me on this. They’re playing a trick on you. The taste of the Deep South is rubbish. It tastes of cheap fried chicken, poverty, country fairs, anti-intellectualism, racism, and deep-fried Twinkies…all for £3.59 for a limited time only.

It’s how they get you. It starts with a chicken sandwich for £3.59, and the next thing you know it’s Brown v. the Board of Education all over again.

On the way back across the river, I saw this building.

I have no idea what it is. Probably the summer cottage of some wealthy British lord or duke or baron or something, I reckon.