With the Bridge of Dreams behind us, we made port in Oslo, Norway, the Most Expensive City on Earth. Prior to winning that dubious distinction, it was a Viking capital, widely known as being Home of the Most Hats With Pointed Horns on Earth. Early in its history, it was also launching point for the Most Savage Coastal Raiders On Earth, winners of the coveted World Cup of Rape, Pillage, and Murder forty-three times between 799 AD and 1023 AD.

One might expect such a colorful history to make for an interesting city, and one would be right.

The early Vikings were masters of the sailing ship, and modern-day Osloians, or whatever it is you call natives of Oslo, are reluctant to give that tradition up. The harbor was crammed quite full of wooden sailing ships when we arrived. 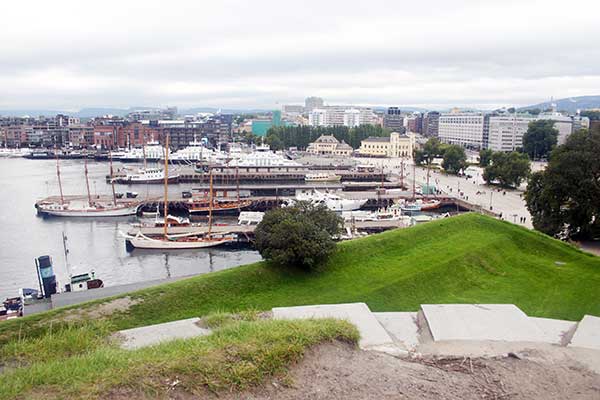 I’m not quite sure what they made of our strange vessel of painted metal, and its lack of sailing-masts and oars and any other visible means of propulsion. I half expected to be greeted as some sort of strange seaborne god, arriving on the shores of the city in a magical floating hotel and casino that moved under its own power and levitated on water with the power of elfin magic alone.

What actually greeted me was this…oddly proportioned statue. 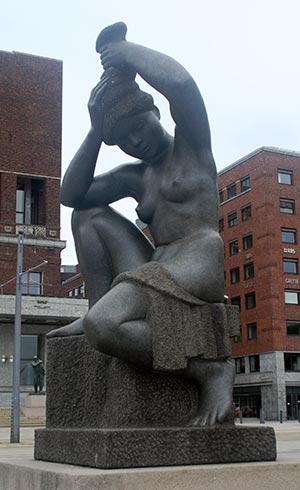 The sculptors of Norway have it all over the sculptors of Russia in that, it would seem, they have actually seen a real human breast up close, and are reasonably familiar with its general overall shape, size, position, and disposition.

What they would seem less acquainted with, however, is other particulars of human anatomy, in regards especially to things like hands and feet. Good Lord, I have not seen hands and feet that big since World of Warcraft. And I have a dwarf paladin, so I know disproportionate extremities when I see them.

She can crack walnuts with those toes, I reckon.

The castle proper was under significant renovation when we arrived, and so looked nothing like its Wikipedia entry. I was able to visit part of the castle complex, though, which to my eye looked largely like a collection of stone houses behind a wall. 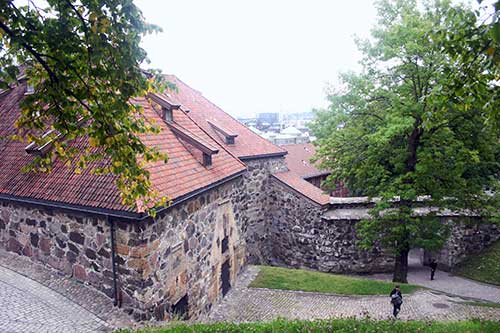 One of the main buildings of the fortress complex featured a stone wall bristling with a rather startling array of cannon, the better to…err, I don’t know. I’d say “beat back ravening hordes of invading Vikings,” but, well, you know. 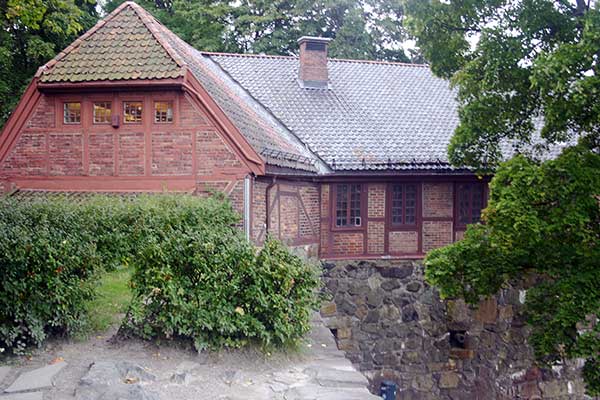 And speaking of walls, the Norse were rather good at them, I must say. 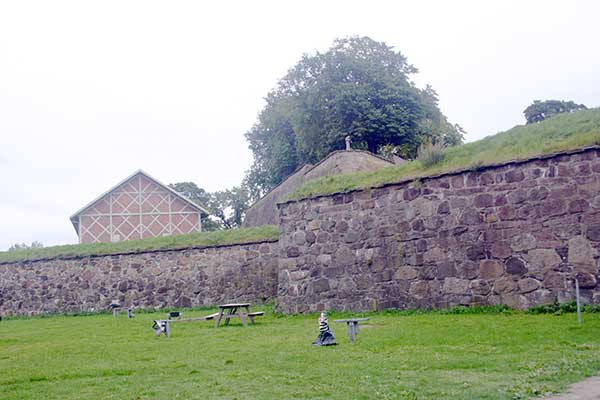 This formidable twelve-foot wall of stone entirely surrounds the fort. It rendered the entire castle complex, and the city that the castle protected, virtually impregnable to attack from the time of its completion in the late 1200s all the way up through 1982, when advances in military technology led to the invention of the stepladder. Overnight, this once-awesome defensive structure was made obsolete. World powers shifted in the blink of an eye, as often happens with new, disruptive technologies, and the golden age of the Norwegian empire was irrevocably behind it.

The Norwegians do love their cannon, though. This one looks out over the wall toward the busy urban center of Oslo’s downtown district. 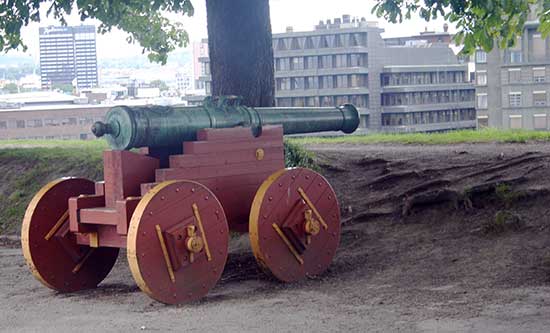 If that office building ever declares war, man, Oslo will be ready.

The city reacted with more shock and less awe to our arrival than I might have preferred; it wasn’t long, in fact, before those fearsome cannon swung ’round our way. 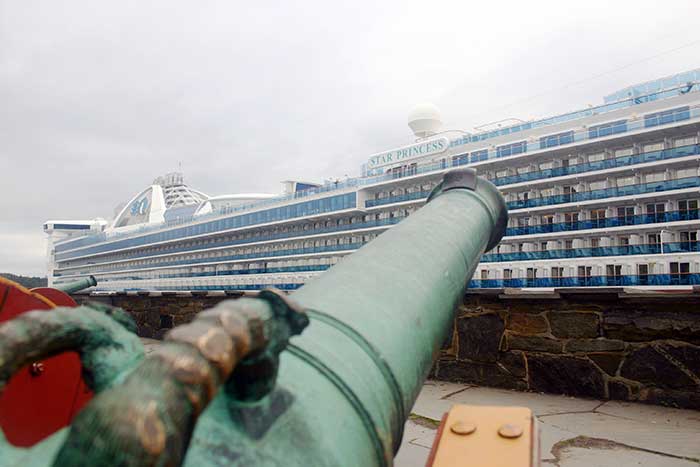 Initially, they demanded a million dollars and the head of Dick Cheney as ransom for our safe release. Hours of tense negotiations ensued, during which compromises were made on all sides. They finally agreed to accept a dozen old VHS tapes of “Knight Rider” episodes and a signed photograph of David Hasselhoff, which at the current exchange rates were worth approximately the same amount as their original demand. During our stay, the American dollar was so far in the crapper that a minute of Internet time in an Oslo internet cafe cost about $842.67, or a two-pence coin in British pounds sterling.

This is, it might be argued, not the right time for an American to be vacationing abroad. Seeing as how our itinerary included several stops behind the old iron curtain, though, one could say that there’s a tradeoff between visiting during a time when the dollar’s in the toilet but Americans are warmly welcomed with open arms, or a time when the dollar is invincible but Americans are warmly welcomed with firing squads. One takes what one can get.

6 thoughts on “Adventures in Europe, Chapter 23: Give me Hasselhoff or give me death”