Throughout my life, there have been several recurring themes in my dreams.

I’m not talking about the one where I become despotic ruler of the earth and crush dissent in my iron fist; that’s really more of an ambition than a dream. I also don’t mean the one where I suddenly realize to my horror that I have been enrolled in some university all year but I totally forgot about it and don’t know my class schedule, and I’ve only just become aware that today is finals day and I can’t even find any of the classrooms…which, annoying as it is, is pretty much a run-of-the-mill stress dream. Any of you who don’t have that dream, be happy.

Nor do I mean the one where I see myself standing in sort of sun-god robes on a pyramid with a thousand naked women screaming and throwing little pickles at me–that’s actually Val Kilmer, not me.

The dream that I have is about a bridge. And really, in some ways, I think it might be this bridge.

You can, if you want, click on the pic for a much, much bigger version (nearly four thousand pixels wide!).

This is a hand-stitched panorama of the Østbroen Bridge, or the Great Belt Bridge, in Denmark, which we passed beneath (by inches) on the way from Gdańsk to Oslo. I put it together in Photoshop from a half-dozen pics I took by setting my camera on a rail on the front of the ship and holding the shutter down while I rotated the camera by hand, on account of ’cause I don’t have a modern DSLR capable of doing panoramic shots by the power of Science and elfin magic.

Which, as a side note, if anyone out there wants to contribute to me getting a better digital camera than my first-generation EOS digital, I’d be most appreciative.

My dreams have often been illed with impossible bridges. In some versions of the dream, I’m on a flat, two-lane bridge, completely lacking guardrails, that extends five or six hundred miles into the water and then slowly dips below the waves, leaving me stranded without enough room to turn around and go back the way I came.

In others, the bridge is more like this one, only in the center it starts to rise more and more steeply until finally I have to stop the car, get out, and climb. There’s usually a narrow catwalk, or sometimes just a tightrope, that makes up the center of the bridge; I walk across it, climb back down on the other side, and somehow my car is waiting for me to get in and finish the drive.

In yet other versions, it’s a long, high suspension bridge that ends on the far side on the roof of a skyscraper or other tall building. I drive across, and then find myself on the roof, with no way to get off the building onto the street below.

So when I saw this bridge, which is impossibly long (it’s apparently the largest bridge outside Asia and the third largest in the world, or so the ship’s captain said), it felt kind of like a weird homecoming. In, y’know, my head. When I’m asleep. But only sometimes, and not during the times when I’m Val Kilmer and it’s the thing with the pickles.

We passed beneath it with, as I mentioned, only inches to spare. I really wanted a photo of that, but my camera battery chose that precise moment to die, which I thought was absolute dog’s bollocks, but there it is.

I particularly like the windmills on one end, and the way it touches down on a little spit of land and then promptly dives into an underground tunnel and disappears on the other, which you can’t quite see in this panorama. 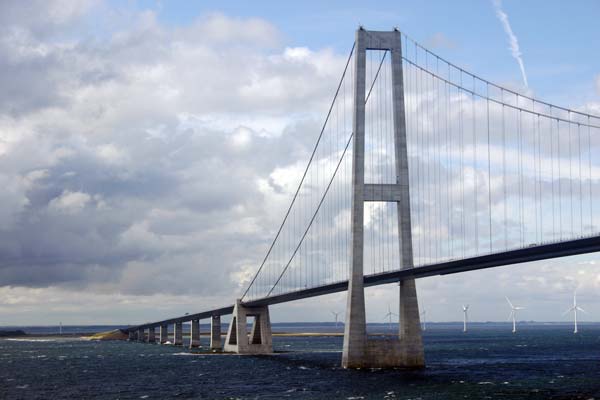 I have no idea what this bridge means, nor why it’s been a central fixture in my dreams for so many years. I have noticed that I haven’t dreamt about it since we passed beneath the Østbroen Bridge, for reasons that entirely escape your humble scribe.

12 thoughts on “Adventures in Europe, Chapter 22: Sliding Under a Big Bridge”