Just a stone’s throw from the torture chamber and amber museum in Gdańsk is the Church of St. Mary, the largest brick Gothic church in the world.

I’m sure their geometric proximity vis-à-vis hurled rocks is probably no accident, as churches and stones seem to go together like whiskey and hunting. It is, even by the scale of St. Petersburg religious edifices, altogether a grand structure, towering hundreds of feet over the faux Old Town like Godzilla over a small Japanese seaport on Tokyo Bay.

I couldn’t get a decent picture of the church proper, as it’s crowded so closely by neighboring buildings that the only way to do it seems to be helicopter, so I grabbed this one from Wikimedia Commons. 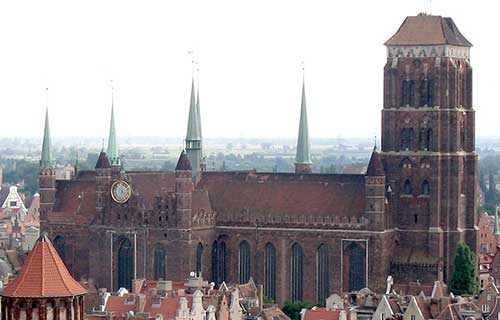 I will admit, when we arrived in Gdańsk I didn’t expect to find myself looking down at the spires rather than up at the spires.

The church started out as Lutheran and then eventually went Catholic, in a reverse of the normal order of things ’round the Baltic. I’ve never been quite sure about all the doctrinal differences ‘twixt the two, except that Catholics follow the Pope and Lutherans follow Lex Luthor, the archvillain who nailed a list of ninety-five complaints to the door of the Fortress of Solitude, protesting among other things the sale of indulgences, the role of confession in the forgiveness of sin, and the prescription-only status of Rogaine.

As a currently Catholic church, St. Mary’s lacks some of the more exuberant display of not-idols-no-really that many of the other churches in Eastern Europe boast. It is nevertheless still quite a magnificent structure, its soaring white interior carefully calculated to produce a maximum sense of shock and awe in the psyche of an illiterate serf. 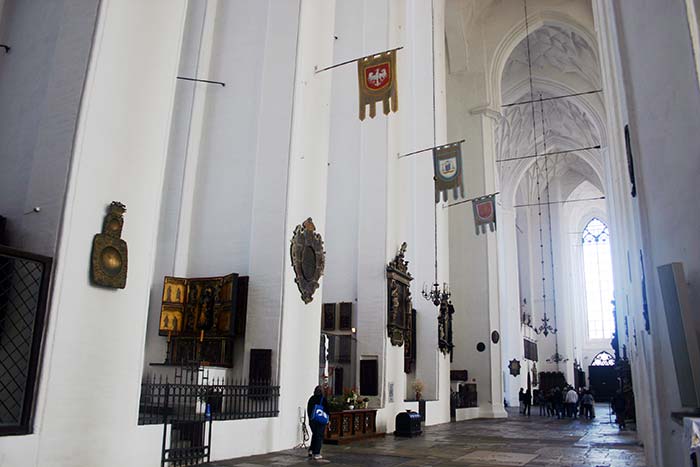 There are a few not-idols available for the faithful to not-worship, but for the most part it’s all towering arches and huge naves and such.

This church has seating for 25,000 worshippers inside. Yep, you read that right. That’s three zeros after the comma, meaning the Blessed Mother can still kick some ecclesiastical ass and show those so-called “megachurches” in Texas how it’s done, yo. 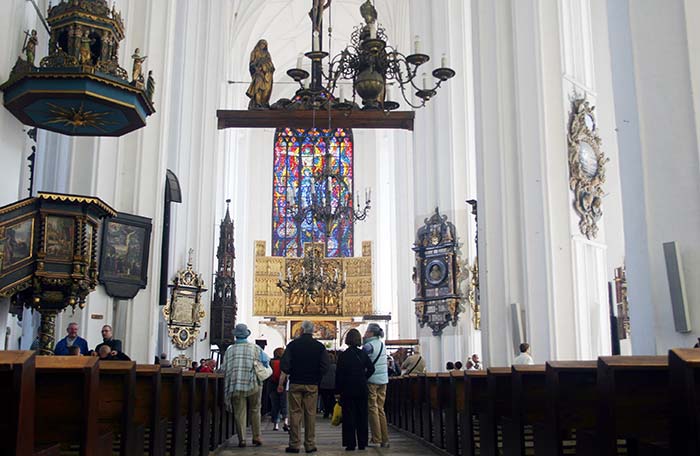 The Church of St. Mary was, once upon a time, home to a large number of artistic treasures. That was before the Thirteen Years’ War, the War of 1569, the Prussian War, World War I, World War II, and the Soviet occupation. It’s been looted by a Who’s Who of historical world superpowers: the Teutons, the Prussians, the Nazis, the Red Army, you name it, all of whom have pretty much treated it like a drunk eighteen-year-old girl backstage at a hair metal concert.

It does still have a few treasures that haven’t been carried off or melted down, though, like this bit of sculpture, 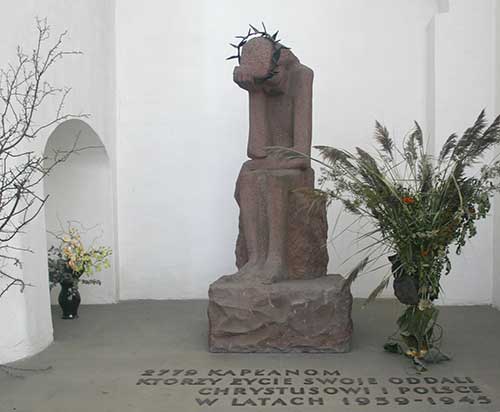 I don’t know what it’s actually called, but I mentally dubbed it “Jesus Does a Facepalm.” 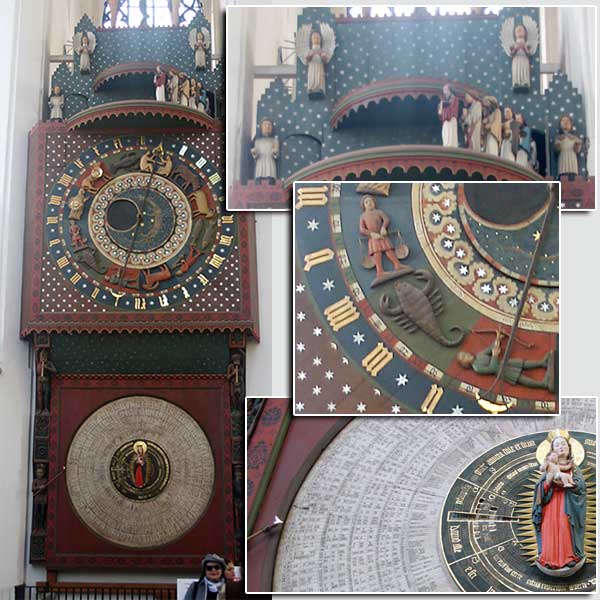 This thing tracks the astrological constellations and about eleven thousand and two important dates in the lives of the hundreds and hundreds of sacred figures of Catholic monotheistic tradition, and–get this–it even has clockwork saints who chase each other around the top of it like Punch and Judy after a free and vigorous exchange of ideas over the issue of whether or not the essence of the Trinity can be divined wholly by the carnal senses without the direct intervention of the Holy Spirit.

Some believers claim that the world will end in 2012, when this astrological clock finally winds down. Others await the triumphal coming of the Great Savior, who with the Golden Winding Key of the Epoch will once again set the clock into motion and usher in a new Golden Age under the Sun of Precious Stones, once thought by the Aztecs to have been destroyed by jaguars but now known to have been under the couch with the TV remote this whole time.

Near the entryway to the church, a guy was sitting behind a card table with a sign in English advertising climbs up the tower for five zloty, which is something like a buck fifty or so. Behind him was a narrow wood door with a small flight of stone steps leading up.

My sister and I opted for the climb. Now, what I expected for my buck fifty (or, more accurately, for my sister’s buck fifty) was a climb up one of the turrets to a place where we could look out a window or something. What I actually got was an episode of television’s Fear Factory, only with 70% less First World obsessive-compulsive concern over safety and avoiding gross bodily harm.

The steps start out deceptively, sort of like giant alien killer robots do. 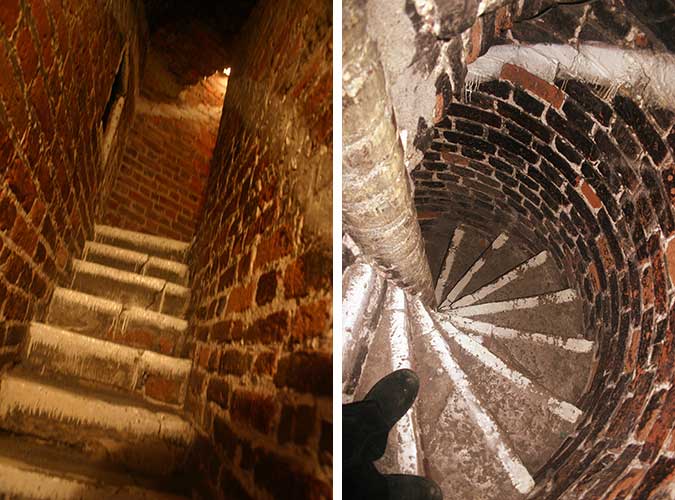 They go up straight for a distance, then turn into a spiral nightmare where each step may be narrower than your foot, but at least it’s about three feet high.

But, as with giant alien killer robots, they’re more than meets the eye. I figured the spiral bit would go up for a while and come out into a room where we could look out the windows and say “Oooh!” and “Aah!”. Then again, I also figured that Sarah Palin would have gone away by now, so that shows what I know.

The main vault of the church got bombed out in WWII, and has never been restored. Instead, they just kinda stuck a big concrete stairway around the inside of the shell and called it good. 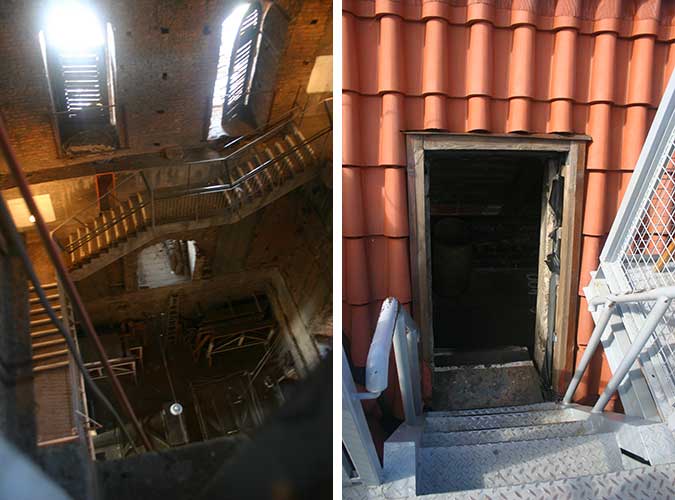 What the photo on the left fails to convey, aside from the stark raving terror of this place, is the darkness. That’s somewhere around a ten-second exposure you’re seeing there.

Imagine climbing up a dozen stories on a crude concrete stairway in near-pitch-blackness, and you’ll start to get the general idea. Now picture that while being chased by giant killer robots from space and you’ll have the plot, or what passes for the plot, of a Michael Bay movie…but I digress.

The stairway did not lead out into a room where we could look out the windows and go “Oooh!” and “Aah!” Instead, it led outside, onto a three-foot by four-foot metal platform bolted to the very top of the church. They hacked a hole in the roof and put a doorway there, with a few metal steps leading up to the platform. All in all, there were 406 steps, not including the five metal steps up to the platform.

A guy was sitting on a folding chair on the platform, reading a book. For five more zloty, you could borrow the binoculars he had hanging around his neck.

Not that you needed them. The view was amazing–enough to make the scary climb up hundreds of steps in near-total darkness and the giant alien killer robots totally worth it.

When I said I didn’t expect to end up looking down at the church’s spires rather than up at them, I meant that literally. 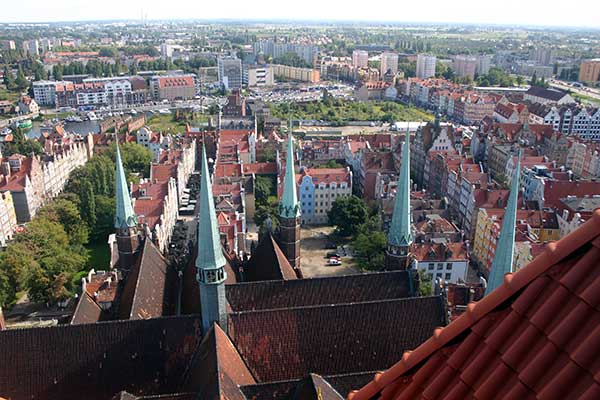 Gdańsk is one of those towns that always made me pull my hair out whenever I worked on the Saudi version of the Royal Caribbean cruise catalog; it has a lot of churches. All of which are probably bigger than a Texas megachurch, and most of which look downright tiny when looked down on from up atop St. Mary’s. 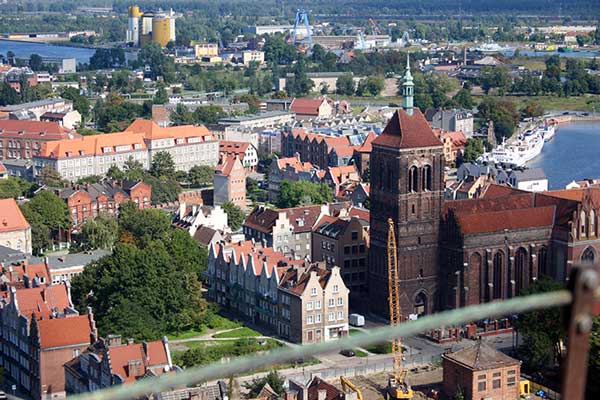 Each corner of the topmost section of the church is protected by a lightning rod, and each lightning rod has a small metal flag embossed with a year (possibly important years in the church’s history, perhaps?). 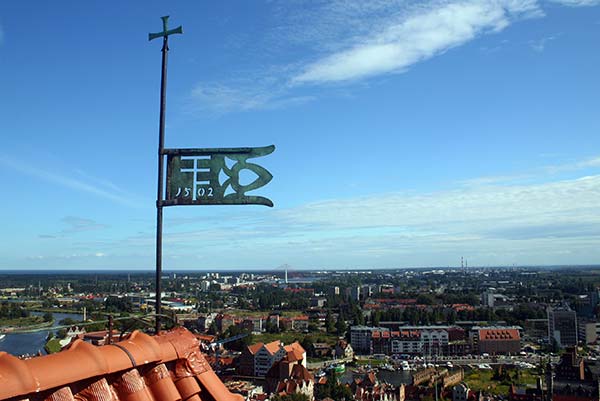 Now, personally, I’ve always thought that putting a lightning rod on a church is a profound vote of no confidence in the divine power and mercy of the Lord, myself.

The lightning rods atop St. Mary’s feed into thick cables that serve double duty in helping prevent hapless tourists from plummeting to an unfortunate death many stories below upon the storied streets of Gdańsk, which is perhaps a dubious double duty were it not for the fact that, presumably, they don’t let people up here in the middle of a thunderstorm. 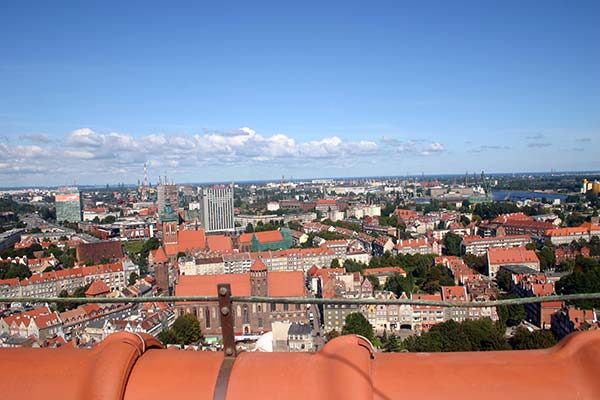 The gentleman with the book and the binoculars mostly ignored us while we took in the sights and mostly tried not to think about the 406 steps, not including the five metal steps up to the platform, that loomed in our future.

The trip down was, if anything, even scarier than the trip up, in no small measure because on the way down you can sort of see, dimly, the vast distances that one could travel feet over teacups if one were to make a misstep. My sister has a mild phobia of stairs as it is, so yeah. Terrifying up, twice as terrifying down.

About midway down, I paused to take a picture of a bell. 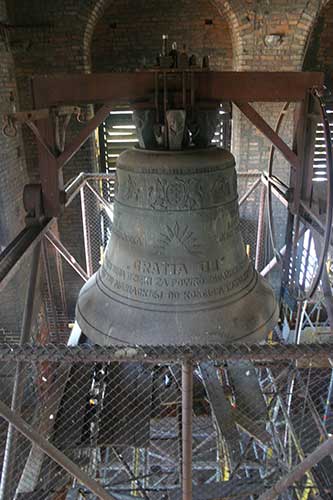 It’s a big bell, just kind of hanging there, with no way to ring it or anything; mostly, I photographed it to distract myself from the horrifying fear of imminent and sudden death.

We eventually made it down, and left through a different door than the one we entered through. We came out near this…this… Well, I’m not really sure what it is. 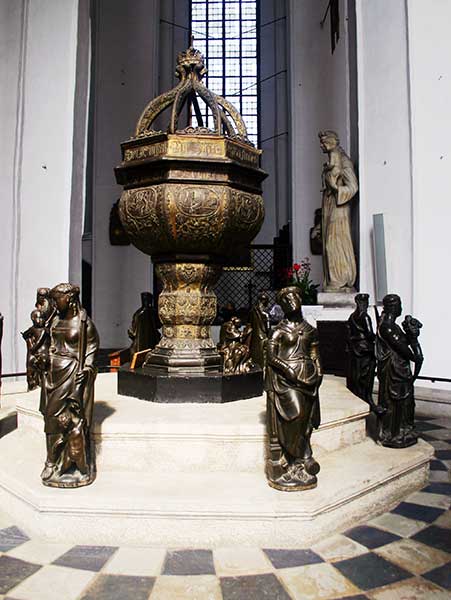 It looks kind of like a fountain, sort of, only there’s no water, which might in its own way be a fitting icon of religion in general. The women clustered around it are obviously pious; you can tell by the generally unhappy expressions that you always see in carvings of the pious people. In the annals of religious tradition, the intersection of “pious people” and “happy people” is almost always a null set, which may have been what inspired Friedrich Nietzsche, himself a profoundly unhappy person, it seems (but in an entirely impious way) to observe “The Christian resolution to find the world ugly and bad has made the world ugly and bad.”

There’s a statue behind the notafountain fountain thing, of some dude carrying a child. Don’t blink! Don’t turn your back. Don’t look away. And don’t blink. Good luck!