Tallinn, as I said once before, is a city of contrast.

Now, I’m not dissing on all those other cities that come up when you do a Google search for “city of contrast.” I’m sure Scottsdale, Arizona, has lovely contrast. Why, I hear they have commercial buildings and residential buildings there!

But if you want some serious, mainline-quality, high-grade, industrial-strength contrast, Tallinn is the place to be.

As soon as we left the ship and made our way past the sheep, we found ourselves on one of Tallinn’s main streets. Following the road in one direction leads to the walled Old Town district, which its Medieval gateway and ancient town center. The other direction looks like this. 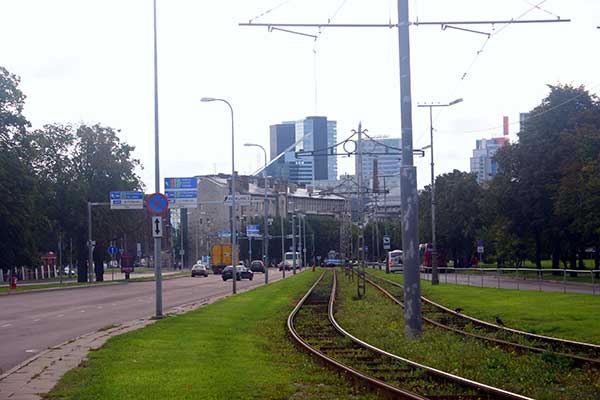 At the midway point on that road, right where the curious tourist comes out onto the main street from the port/sheep ranch/massage parlor, is the ultramodern Tallink Spa and Conference Hotel. It’s not “ultramodern” in that “nanotech and self-modifying metamaterials” sort of way, but in that stainless steel and brushed aluminum way that was popular, like, I dunno, ten years ago or something. 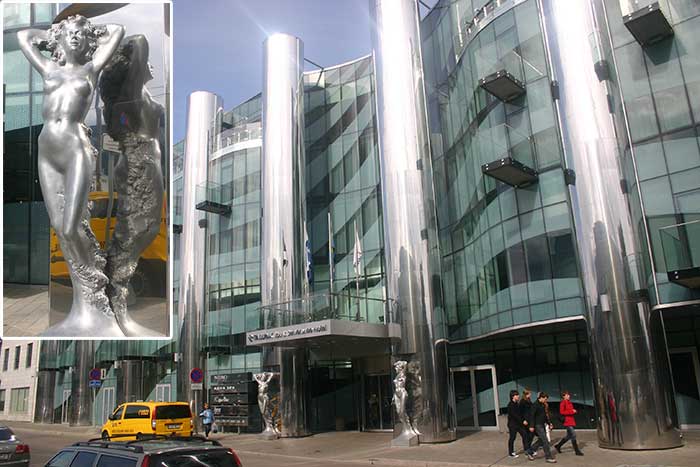 Why, yes, they are that magnificent, and thank you very much.

This is one thing I admire about Eastern Europe; they don’t have this weird and kind of freaky notion that the sight of a nipple will scar the brains of children for life, forever dooming them to a meager existence as a cackling, drooling pervert, trolling Chatroulette with an oversized trenchcoat with which to display undersized wares.

And ultramodern, stainless steel and brushed aluminum design brought with it, apparently, a knowledge of female anatomy entirely lacking in the day of Peter the Great, back when nobody had ever actually seen a human female up close.

The archway to the Old City is guarded by this place: 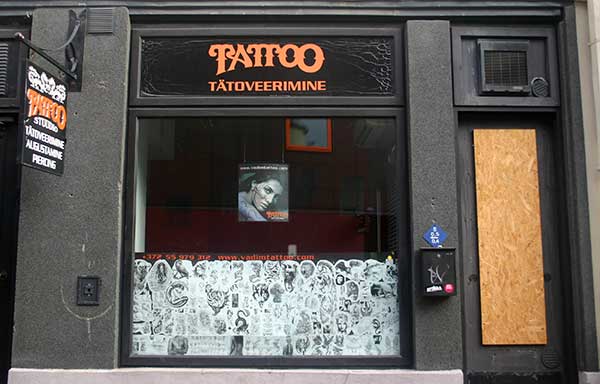 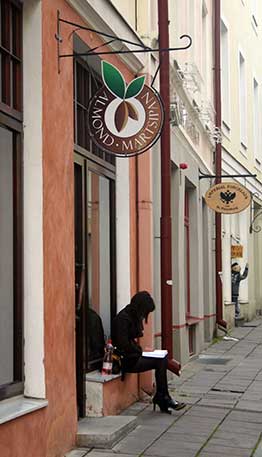 Unlike the Port of Tallinn Shack-o-Massage, this place actually did tempt me. I thought about it, really I did. In the end, two things stopped me: I am still not entirely sure that Eastern Europe is current with the hip new ideas regarding invisible things called “bacteria” and “viruses,” and I also wasn’t quite sure that Tallinn has the notion of money, as in things other than sheep or goats that you can exchange for goods and services.

The streets of Tallinn outside the wall look, and sound, pretty much like the streets anywhere else. Inside the wall, it’s a completely different world.

The first thing that really struck me in the Old Town part of Tallinn is how quiet it is. The thick stone walls are extraordinarily effective at blocking sound, so that the howling of the ice weasels and the clamoring of the barbarian hordes wouldn’t distract the ancient Guildmasters from the task of counting their money. (See? I kid, I do. I know Tallinn gets the concept of money. Hell, I wouldn’t be surprised if they invented it.)

Stepping between the Old Town and the modern part of the city is jarring. Even the air feels different; the walls block the wind, so the Old Town has a stillness to it that’s quite peaceful and lovely.

There are cars in the Old Town area, but they’re few and far between, and when one drives by you become acutely aware of how noisy and clanky they are, in a way that you don’t when you’re surrounded by them all the time.

What you do hear in the Old Town is the sound of people. People talking, people laughing, people calling out to other people. Cities like New York and Chicago have a lot of people, but the human noises are, day and night, almost entirely drowned out by the noise of traffic and machinery. In Tallinn, you are aware of the presence of human beings all around you. It’s a very interesting, and for me unusual, experience.

The Old Town district is home to an old cathedral that is to the exuberant, over-the-top excess of the Russian Orthodox houses of worship what Alanis Morisette is to Lady Gaga: they both do basically the same thing, but in such different ways you have to wonder if they came from the same planet. 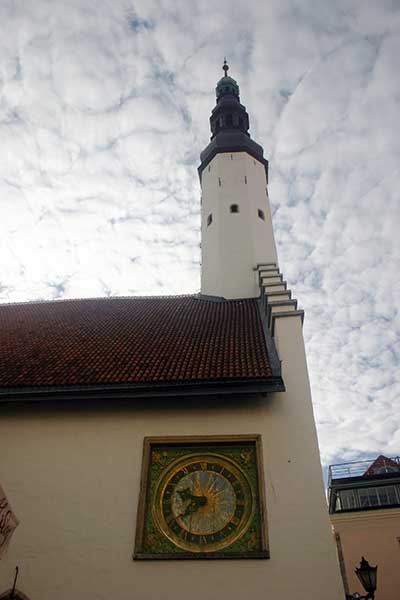 The clock on the side of this church is made of wood. I think that’s pretty damn cool.

The inside is, when compared to the Church of Alexander II Was a Fucking Idiot, downright Spartan in its simplicity. 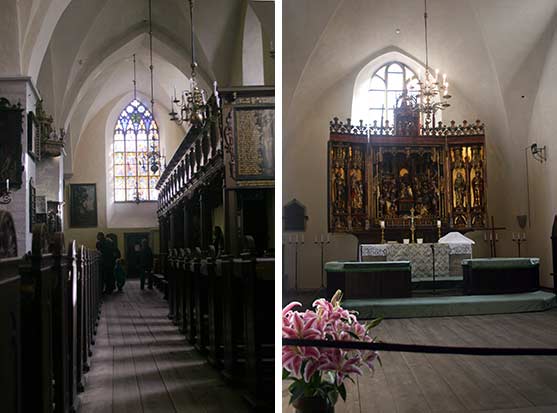 The door to the church is marked with this little round symbol. You see them all over parts of Eastern And Northern Europe; the symbol indicates a point of historical interest.

If it looks familiar to some of the folks reading this, it should. You know who you are.

It’s the same symbol Apple uses on the Command key for their keyboards. And that’s intentional; Apple actually copied the Command key symbol from this very marker. Which is also kind of cool. (According to Wikipedia, some Swedish Mac users refer to the Command key as the “Fornminne,” or Ancient Monument, key. Now, normally, I personally don’t trust Wikipedia to tell me the sky is blue, and this story sounds highly apocryphal to me, but it’s a fun tale anyway.)

The cathedral is just a stone’s throw from the town center, which I’m sure is no coincidence. Given the shackles adorning the pillars around the town hall, I have no doubt but that the folks who attended services here could, on a fair and sunny Sunday afternoon, get a bit of exercise and indulge in a little sport by flinging rocks and other small, dense objects at the faithless unbelievers shackled to the town center, in the interests of camaraderie and good spirit.

This is an ancient tradition almost entirely ruined by the invention of television; nowadays, folks would prefer to get their amusement by watching reruns of “Friends” on TV, and another custom falls by the wayside, neglected and ignored by the modern age.