(With props to Marnen on Twitter for the title)

Prior to this trip, everything I knew abut Estonia I learned from reading Dilbert cartoons about the fictional land of Elbonia, which is generally described as being waist-deep in mud and overrun with weasels.

Elbonia is loosely modeled on Estonia, so that’s generally what I expected when we arrived: mud, weasels, and Eastern Bloc squalor. And maybe some funny hats. The Elbonians in Dilbert always wear funny hats.

I got none of those things. No mud, no weasels, and definitely ixnay on the ats-hay. Instead, what I found was one of the most interesting, beautiful cities I’ve ever seen. Tallinn, the capital city of Estonia, was the hilight of the cruise for me, even though we spent only one afternoon there.

To be fair, the visit started inauspiciously. The Port of Tallinn isn’t so much a “port” as it is “a desolate wasteland with sheep wandering around in it.” Actual, literal sheep. 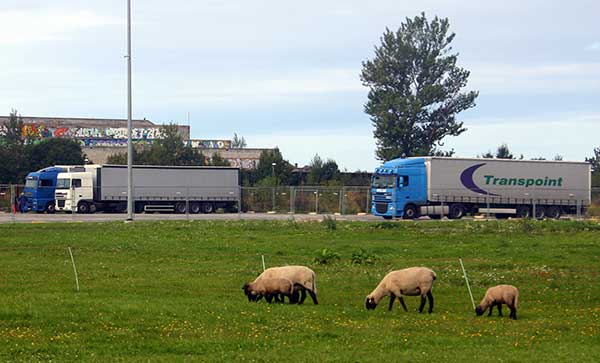 Clumped together in the middle of this wasteland is a sprawling, ramshackle collection of little tents and huts, packed to the gills with people hawking all sorts of wares–kind of like a scene from a William Gibson novel or perhaps a low-budget, indie remake of Bladerunner. At the edge of all the stalls selling leather goods and little wooden boxes and sunglasses and small, inexpensive keepsakes of Eastern Europe, I spotted this place: 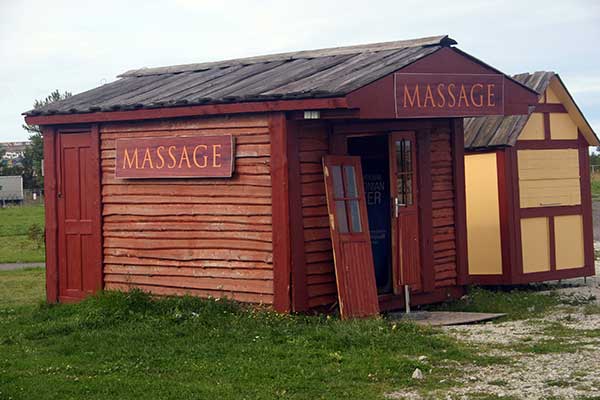 I was tempted, I must admit, but I battled with the temptations of the flesh, and…

Well, actually, I lied. I wasn’t tempted at all. Not even for a moment.

I kept going right past this shack and its really not very tempting offer, past the bored-looking guard at the gate to the port who was the closest thing we discovered to any sort of passport control, and out into the city itself. A few blocks from the port, we encountered the ancient stone wall guarding its center. 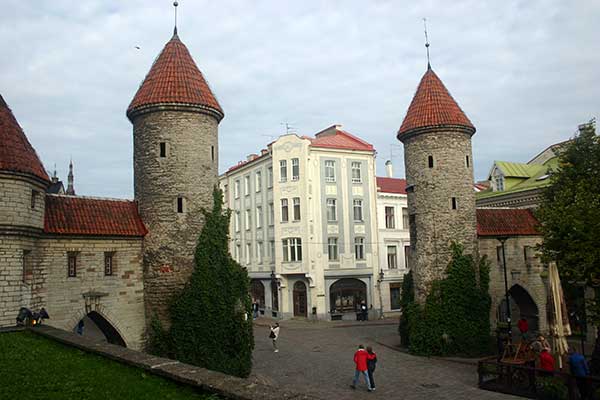 Tallinn is a city of contrast.

The heart of Tallinn is an ancient Medieval walled city full of narrow, winding roads. A modern glass and steel city has sprung up outside the wall, wrapping the Old Town in a busy hub of international commerce and high-tech development.

The streets of Tallinn are picturesque, like Stockholm is picturesque, but with at least 80% less essence “I loooooove my kidnapper” going on. 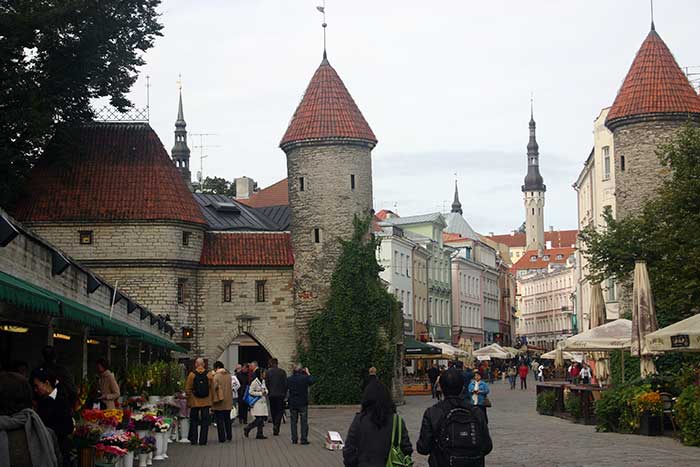 Commerce has long been the living, breathing heart of Tallinn. In the early middle ages, the city grew wealthy and powerful by trading textiles throughout the Baltic. A strong guild system developed here; at one time, each street in the town belonged to a different guild, and you had to be a member of the guild to work or live on that street. Guilds are a great idea when you have an illiterate population who can’t read instruction manuals or user guides.

The history of Tallinn is rich and turbulent, if by “rich and turbulent” one means “fucked up and weird.” If someone other than Michael Bay were to make a movie about Tallinn’s history, it would go something like this:

The city of Tallinn is one of the oldest and best-preserved Medieval cities in the world, but it’s not a museum. It’s an actual, living city. The line between the old part of the city and the modern part of the city is jarring; in one area, you have skyscrapers, and in another, you have this. 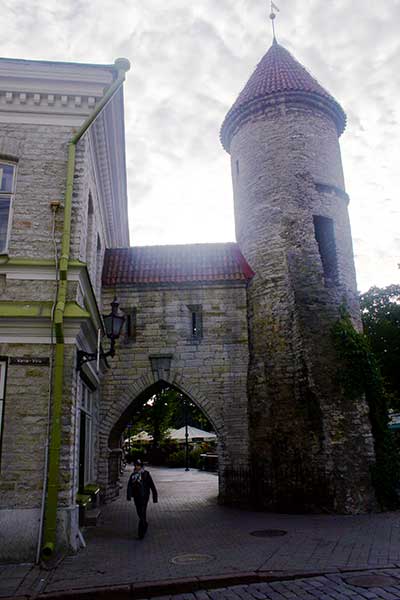 On one of the narrow, winding streets snaking along the edge of the Medieval wall, we found a local dining establishment. 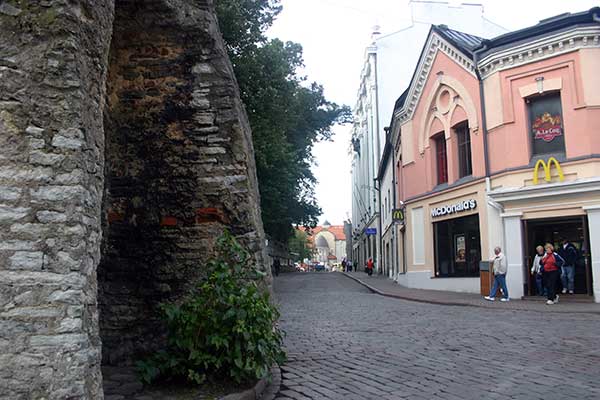 I think it’s part of a chain. We saw these places throughout Eastern Europe. I bet the food’s pretty good, since they’re so popular.

The center of Tallinn’s Medieval district is the old town hall, which has functioned as the hub of Tallinn’s civic life for…well, for longer than the country I live in has been a country, really. The town hall is gorgeous, and is right smack in the center of the town square. I never really knew what a “town square” was until this trip. 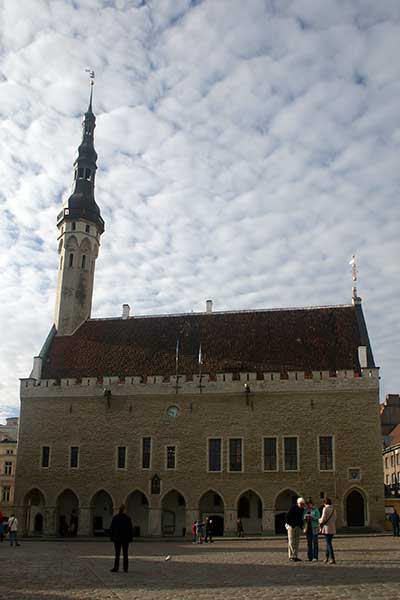 Here, many of the most essential functions of Medieval society took place. Rules of commerce were established, guild and social matters were adjudicated, heretics and unbelievers were strung up for torture, townspeople were married, and gossip was exchanged. Some of the relics of these bygone functions are still apparent on the stone pillars that line the hall. 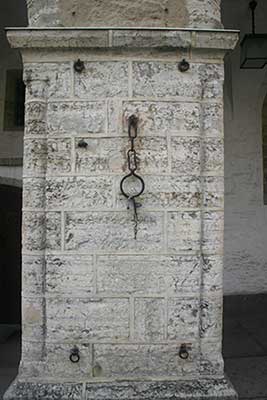 I kinda want a pillar in my basement that looks like this. I promise I will only use it for good.

I found this sign in a small shop just off the town square. I think it lies. 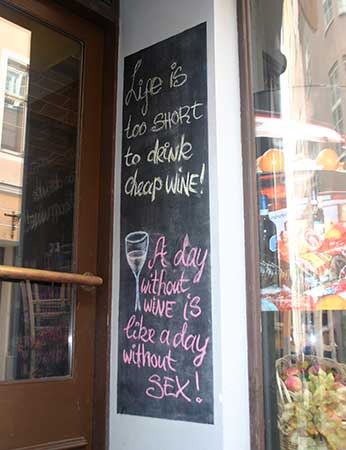 I love this old house. 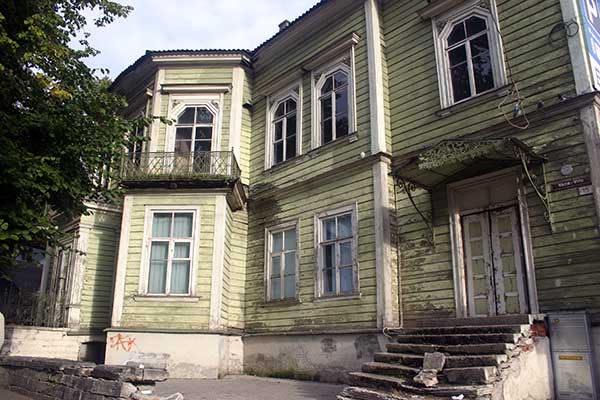 It’s run-down and collapsing now, and for some reason that only makes it even more beautiful I have no idea what the story of this house is, but I bet it’s fascinating. Were I to have infinite resources (which I don’t), and were I to move to Tallinn (which I wouldn’t, though I do love the place), I would want to buy this house and fix it up. It is, to my eye, heartbreakingly beautiful.

46 thoughts on “Adventures in Europe, Chapter 15: The history of Estonia? But that would be Tallinn!”