One of St. Petersburg’s most famous monuments is a sprawling, ornate Russian Orthodox cathedral. Unlike most of the various Orthodox cathedrals throughout Russia, this one isn’t built in the Baroque style, but is built in a style that recalls Medieval Russian architecture.

Medieval Russian architecture is modeled, it seems to me, on the basic design of a turnip. Or perhaps an onion. One of those little white kinds of onions they chop up and put on hot dogs that you get when you’re visiting Boston and you kinda feel hungry but you don’t want to waste the time it takes to go to a restaurant or something, so you stop at a street vendor who’s selling hot dogs out of a little push-cart thingy. There’s an art to finding just the right hot dog street vendor…but I digress.

Personally, I call it the Church of Tsar Alexander II Was a Fucking Idiot. 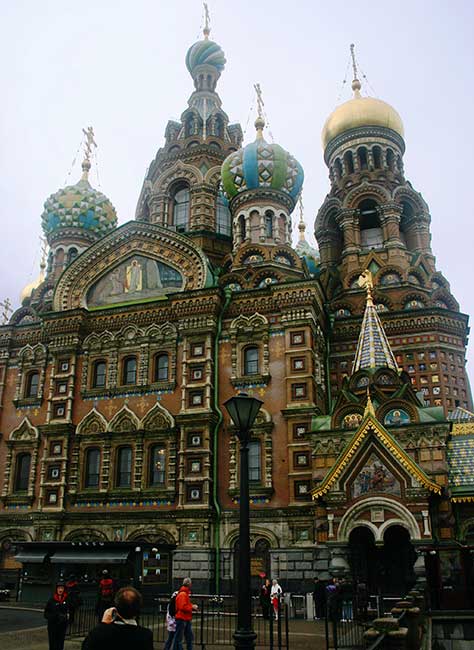 It was built, explained our tour guide of the Name Whose Utterance Invokes The Walking Nightmares, as a monument to Alexander II, who was assassinated on that spot in the late 1800s. 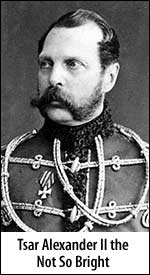 Apparently, he’d been riding along the road, just minding his own business and doing whatever it is a despotic monarch does, when some Anarchist threw a hand grenade at him. The grenade totally missed, and did little more than make some noise and frighten the horses. So Alexander, being a despotic monarch who thought he could do whatever the hell he wanted to, stopped the carriage, got out, and started yelling at the Anarchist who had just thrown a grenade at him. Whereupon another Anarchist just happened to wander by, and just happened to have a grenade in his pocket, and it was curtains for the luckless Tsar. Lacy, gently wafting curtains, on windows gilded in gold with a strange half-Greek-god, half-angel, half-tentacle-monster thing embossed over the top, but curtains nonetheless.

Alexander, like many a monarch before him, forgot the lesson so clearly articulated by Ambrose Bierce, which is that an absolute monarch can do as he pleases so long as he pleases the assassins.

His successor to the throne, the unimaginatively named Alexander III, commissioned the church to be built in the exact spot where Alexander II was sent to meet his maker in little teeny bits. Hence, Church of Tsar Alexander II Was a Fucking Idiot. There’s an important lesson in here for you, kids. When someone has just tried to kill you with an explosive device, don’t stand around arguing with him. His friends might have explosive devices, too.

Alexander III wanted a way to memorialize his dear departed dad. Since the first thing he did upon reaching the throne was to try his damndest to erase his father’s legacy, and since one of the ways in which he set about doing that was to fuel a revival of nationalist sentiment by strengthening the Russian Orthodox Church at the expense of other religious traditions, memorializing his rather unwise predecessor by building a church seemed like a gimme.

The place is mind-blowing, in a way that only religious edifices can be. This is what it looks like on the inside: 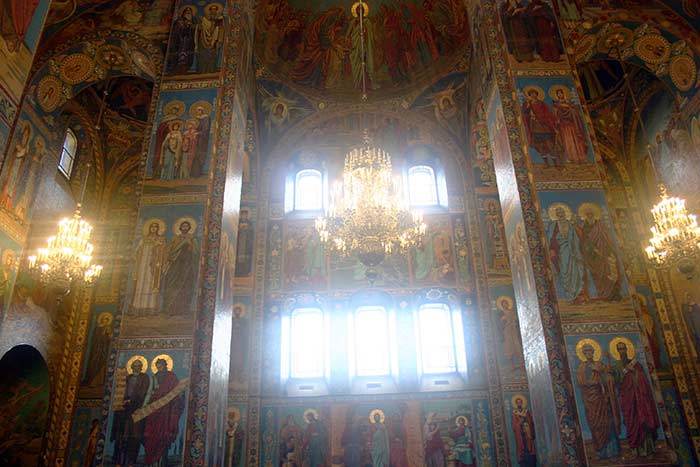 A few months ago, I visited a Mormon temple for the first time. Mormon temples are awe-inspiring structures, and I mean that in the most literal sense possible. Every aspect of the temple’s architecture, from the choice of materials to the shape of the front door, is carefully calculated to create feelings of awe in anyone who sees them. It’s a devastatingly effective technique for emotional manipulation; if you can stir up the right feelings, you can make people forget that the religion was founded by a huckster and convicted fraud artist as a way to con people out of their money.

It works. I could probably write an entire book about creating spaces that manipulate people on an emotional level, just from one afternoon at the temple. The Disney Imagineers have nothing on the Mormons when it comes to manufacturing spaces that inspire an emotional response.

And the Mormons got nothin’ on the Eastern Orthodox architects when it comes to doing the exact same thing. It’s difficult to express in shitty low-resolution JPEGs just how incredibly affecting the architecture of this place is designed to be.

I probably need not say this by now, but yes, that’s real gold up on the walls.

The impact such a building must have had on an illiterate, poorly-educated serf must have been fiercely overwhelming. Take a guy who’s never learned to read, has never seen anything more grandiose than a wood shack or the back end of a horse, a guy whose life is metered out in units of cow manure and bales of hay, and bring him into a place like this, and he’s yours. One look around inside this cathedral and you’d be able to convince him that up is down, black is white, left is right, and there’s an invisible man who lives up in the sky and who wants him to give you money. Or his wife. Or both.

Speaking of invisible men who live up in the sky, the entire building is filled, from one end to the other, of pictures of them. The Roman Catholics don’t got nothing on the Eastern Orthodox when it comes to saints. They gots hundreds of them. They like putting pictures of all of them everywhere they can, floor to ceiling, culminating in this picture up on the central dome just in front of the altar in almost every Orthodox church: 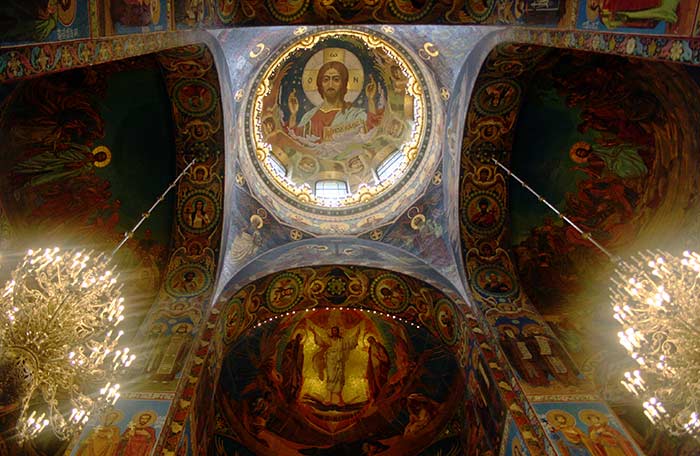 That’s Jesus up there, in his role as Jesus, King of the Universe–a depiction which the actual person, if indeed he existed, would no doubt have found…surprising. It is a truism of Christianity that Jesus became what he set out to destroy.

The Russian Orthodox Church is so fond of its saints that it even puts ’em all over the screen that separates the main part of the church from the sanctuary, where the altar itself and the various widgets and objects used in the magical process of turning cheap wine and bland crackers into the stuff of ritual cannibalism is kept.

These icons dedicated to the hundreds and hundreds of sacred figures in the vast pantheon that is monotheistic Orthodox Christianity are adulated by the faithful, but it should be pointed out that this is not idolatry. The Orthodox understand that when they pray before or genuflect to an image, they are actually paying respect to the thing the image represents, not like those idolaters who build a representation of a sacred force and then pay homage to them as a way to respect the thing that the image represents. Clear?

Add the grandeur of this place to the secret magical rituals carried out by the priest class behind that screen, and our poor illiterate serf never had a chance.

The Church of Tsar Alexander II Was a Fucking Idiot is no longer an actual cathedral. When the Bolsheviks took power, they looted the place. Lenin reportedly wanted to demolish it, according to our tour guide, but was persuaded not to by some of his underlings. For a long time, it was used as a warehouse for potatoes, and it wasn’t until after the fall of the Soviet Union that anyone bothered to restore it.

Back when I was a a very young child, I used to love playing hide and go seek. Somewhat later, in my middle school days in Nebraska, I played a more elaborate version called “ditch ’em,” which pits two teams of players against one another, preferably late at night on a minimum of fifteen acres of ground or so.

A central part of the structure of both games is the concept of a “home base.” People who are on their home base can’t be tagged by the people chasing them; home base is the ultimate sanctuary.

After it was restored, the Church of Tsar Alexander II Was a Fucking Idiot was never reconsecrated. Consecration is, as near as I can gather, a process by which a church or other religious structure is specially designated as a sort of religious home base in the grand theological game of tag; a consecrated structure is safe against demons or the army of the walking dead or something. If it ain’t consecrated, the rules say you can’t use it as a church, or something like that.

Since this place isn’t consecrated any more, on account of the potatoes, it’s now just a museum rather than a church. I’m not sure the distinction really matters much to Alexander II, who I’m sure if he had it to do over again would perhaps prefer to forego the honor of having the church built in his memory in favor of not being blown to bits with a grenade in the first place.

40 thoughts on “Adventures in Europe, Chapter 11: I have so many names…”