I’ve always been fascinated by fucking machines. The idea of a mechanical contraption designed and built to fuck the person riding it, relentlessly and tirelessly, appeals to the mad scientist in me. In fact, I could easily see myself making a living designing and building fucking machines, were it not for the fact that I lack patience and attention to detail, two qualities of incalculable value in the performance of said job functions.

Indeed, I’ve always wanted to own a steam-powered fucking machine, because the notion of such a thing appeals to my sensibilities on so many levels. It strikes me as being at once quintessentially steampunk and also a repudiation of Victorian social mores; and besides, how awesome would it be to have a partner being fucked by an enormous, clanking machine with jets of steam issuing out of it, while I cackle with glee and scamper around tending to the boiler and oiling the various parts of the machine with an oil can?

Ahem. But I digress. In any event, such a machine would be impractically big and unreasonably dangerous, and conversations with physicsduck about the practical realities of such a machine soon dashed any hopes that I might one day own such a thing.

However, I still like fucking machines, and on my trip to Los Angeles I met a couple of folks who do make their living designing and selling such machines. And they gave me one. Which is–get this–designed to accommodate two people at once.

This, ladies and gentlemen, is the Monkey Rocker Tango: 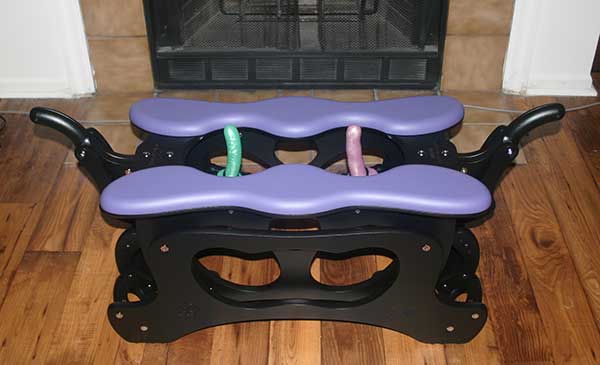 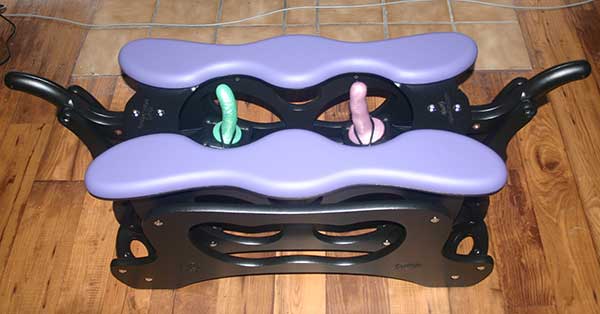 And if, just as a for example, the people on this machine were to, say, happen to be tied to it… well, I will leave the results, Gentle Readers, to your imaginations.

Which is not to say that I advocate tying people to fucking machines, except insofar as it sounds like a lot of fun, and I can think of a few folks who will likely find themselves tied to this one at some point in the indeterminate future, oh yes I can. And again, I digress.

Anyway, when i took this home from the airport in my tiny two-seat sports car, a process that necessitated removing the roof from the car and placing the box standing up in the passenger seat on account of the fact that I have no trunk to speak of, I was pleasantly surprised by the unboxing procedure.

The folks who designed and built this thing have an attention to detail that borders on the fanatic. Even the way it’s boxed up, with custom-made pieces of foam rubber to hold it all in place, shows attention to detail; I’ve bought some big-ticket items from computer and appliance companies who could learn a thing or two about retail packaging from these guys.

Come to think of it, so could the guys at Ikea. Some assembly required, sure, but in this case “some assembly required” means “about thirty seconds with no tools.” Seriously, the way this thing is designed makes the folks at Ikea look like a bunch of careless nutters with a hatchet.

Yet again, I digress.

And the best thing about it is that it’s silent. I mean like eerily silent. The better to hear the moans and screams of the people tied to it, I think. (That’s one of the problems with the Sybian, by the way; I’ve seen those things used at many play parties, and they sound like a freight train loaded with bowling balls colliding at high speed with a cement mixer full of marbles. What’s the point of strapping your favorite Innocent Victim to a relentless mechanical fucking apparatus if you can’t savor every little gasp and scream?)

Liam the kittycat quickly discovered that the assembled device is exactly the right size for a Secret Lair of his own, and has taken to lurking beneath it and, I don’t know, plotting the invasion of France or something.