icedrake posted a question in this conversation thread which I thought might deserve wider discussion. On the subject of intentional, functional body modifications, his challenge was to put together a list of desired augmentations. The augmentations should be something reasonably attainable within the next decade; assume that money is no concern. For bonus points, say why you want it. 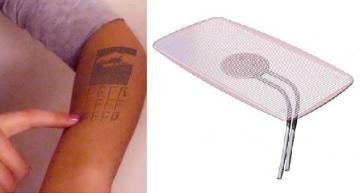 This is a subdermal black and white programmable tattoo, with built-in BlueTooth connectivity. It’s powered by your body’s own metabolism (using a nifty little fuel cell that runs on blood). It can be programmed by any BlueTooth device, so the display can be changed at will, and in theory at least can even show streaming 3G media. (I’d love to watch The Matrix on this thing!)

No new technology here; we can make it with off-the-shelf parts, though there’s no plan at the present for commercialization.

Why I want it: The idea of a direct, implanted interface with other devices is just too cool for words. On a geek cool scale from 1 to 10, with 1 being “not cool” and 10 being “übergeek,” this clocks in at about a 27.4. I am a big fan of tattoos and a big fan of wireless communication; combining the two is just…well, a geekgasm of cool. And it’s functional!

A tiny (about the size of a grain of rice) rare-earth magnet is coated with silicone and surgically implanted in the fingertip beneath the skin. It reacts to electromagnetic fields, and its close proximity to the sensory nerves in the fingertips allows the wearer to feel such fields. You can run your finger over a power cord and tell if it’s plugged in or not, feel the hard drive in your computer spin up, trace the path of power cables through the wall, and even feel the electromagnetic field emitted by the grocery store anti-shoplifting sensors.

People have done this now, but the art of coating the magnets with silicone is still in its infancy. many people who have these magnets implanted end up rejecting them. Even a microscopic breach of the silicone jacket around the magnet causes the body to destroy the magnet, which often leads to infection. A lot of folks in the body-mod community are working on this problem. It’s a simple enough engineering challenge; with the right funding and research, it could be licked in a week. Body-mod enthusiasts don’t exactly have access to funding or to cutting-edge engineering or biomedical know-how, so I said 1-3 years on this one.

Why I want it: We live, every single day, immersed in an environment we are completely unaware of. We’re bathed constantly in electromagnetic fields of all kinds, and yet we’re totally blind to them. Adding a new sense opens up a new world; it’s like being born deaf and suddenly being given the ability to hear.

This ability is useful for a number of practical reasons; but forget those. It’s being given sight when you’re blind, touch when you’re numb. Anything that promises a whole new sense gets my vote!

The most speculative of the near-tech things on this list, respirocytes are nanoscale machines which could be injected into a person, and which perform the basic functions of red blood cells–transporting oxygen to the tissues and carbon dioxide away from the tissues of the body. They do this job, at least in theory, thousands of times more efficiently.

A person injected with a therapeutic dose of respirocytes would, if the technology works, be able to do things like hold his breath for half an hour, run at top speed without breathing for ten minutes, and even survive with his heart stopped for half an hour or more.

Actually making these things will require some pretty fancy work in nanoscale fabrication. The idea is pretty simple; it’s the execution that’s the tough part. The basic technologies are sound, but we’re not very good at making moving parts on the required scale yet.

Why I want it: It’s hard to know where to begin.

First of all, these offer a tremendous insurance policy against heart attack, injury, or environmental dangers that affect breathing. With medical technology as it is now, a person who drowns or suffers a heart attack and does not receive medical attention within minutes is likely to die or suffer irreversible brain damage; these expand the window of time tremendously. They also protect against things like dying in a fire (most people killed in building fires die of smoke inhalation, not burns), counteract the effects of weakened cardiopulmonary organs, and just generally make a person a whole lot more resilient.

On top of that, I suspect that we’d likely find that one of the limiting factors on brain functioning, the efficiency with which the brain can be supplied with oxygen, might be removed. I have a sneaking feeling that a person shot full of respirocytes would probably feel, and think, a lot better.

Okay, that’s enough for now. A lot of the things I want are likely more than ten years past the horizon, more’s the pity. How ’bout you folks? Your turn now!