When I was last in Chicago, dayo and I drove about three hours into Wisconsin to see a house.

Not just any house. To understand this particular house, imagine that you were a space alien. Imagine that you came from a strange culture that did not build buildings. Maybe you lived in caves, or, I dunno, burrowed parasitically into the flesh of gigantic alien space walruses or something. Or maybe you lived in trees like the elves in The Lord of the Rings, and went everywhere barefoot because your fantastically advanced magic hadn’t ever got so far as to develop shoes.

Anyway, the point is that you don’t build buildings. And then, let’s suppose you’d heard of a thing called a “house,” which was an enclosed structure divided into “rooms.” Armed with this knowledge, you set out to design and build a house, but you weren’t quite clear on what exactly a “room” was. 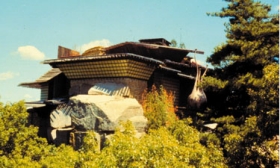 If you were this space alien, the house that you built would probably be The House on the Rock. The Web site and the brochures describe it as the “grand vision” of a guy named Alex Jordan, but I’d say it’s not so much a “grand vision” as it is a study in ad-hoc chaos and arguably the world’s greatest monument to obsessive-compulsive disorder.

It’s an enclosed structure. It’s probably about a hundred thousand square feet or so, and it’s three stories tall, more or less. I say “more or less” because it wasn’t so much “designed” as it was thrown together over time by a man whose grasp of architecture and construction was theoretical at best, and the result is…um, well, it’s hard to actually call it a building, really.

You go in, and you find that it’s a hallway. It’s kind of like being inside a living organism, like the organic space ship on that science fiction TV series whose name I can’t remember with the one chick who’s really hot and shoots lots of people, only more so. The hallway winds and twists and ascends and descends more or less at random, and occasionally it widens out into a place with a bed, or a table, or some other object of furniture you might expect to find in a domicile. It’s hard to say how many rooms there are in this house, because the house doesn’t really do “rooms.” Wide spots in the hallway-tunnel-alien-innards-thing pass for rooms, for the most part, and going from one place to another sometimes involves taking a route that’s…unexpected.

I took many pictures, and they’re very large. For those of you who don’t mind the crushing bandwidth: 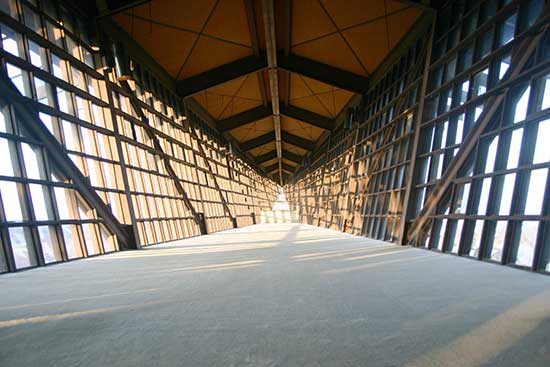 This is the “infinity room.” It’s the most normal and least claustrophobic part of the house. That’s saying something, when you realize that this “room” is actually a triangular spike that juts out 200 feet from the side of the house, and there’s a window in the floor at the end that overlooks a 150-foot drop. The walls are a mosaic of small square windows–thousands of them. It’s really long, it sticks out really far, and it sways when you walk down it. 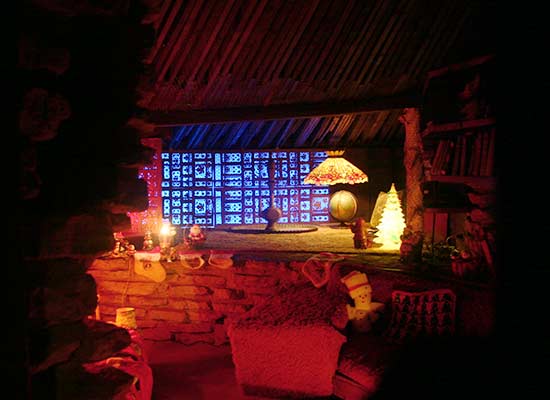 When you enter the house itself, this is what you’re confronted with. Most of the house looks this way–a narrow hallway, winding and twisting and turning, with places that open up into alcoves and nooks just large enough for some piece of furniture or a light fixture or something. The house was built assembled tossed together over a period of decades, and many of the interior walls were once exterior walls, so the walls vary from wood to rough brick to external stone without rhyme or reason. 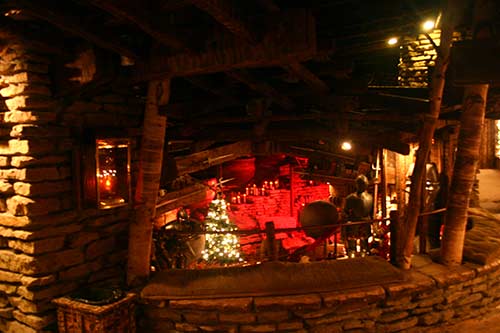 The house lacks anything like a central heating or air conditioning system, so what it does have is a startling assortment of fireplaces. Huge fireplaces, many of which are 20 or 30 feet wide–or more!–and ten or fifteen feet deep.

The word “fireplace” is much too organized to describe the reality. When I say “fireplace,” you’re probably thinking of a rectangular depression in the wall with a chimney above it. “Fireplace” in this context actually means “enormous cavern that goes all the way up to the ceiling, where a gigantic split in the roof lets the smoke out.” These places make the signal fires in Orgrimmar look like small tufts of kindling. Quite how the two or three tons of firewood these enormous firepits require were dragged in here, I don’t know.

The hallway in this picture wound around and down in a spiral in front of this fireplace, with movie-theater-style seating all along the spiral. So that you and, I dunno, ten or twenty of your closest friends could sit in a descending swoop of rock and look at a raging bonfire, but not be able to, y’know, talk to each other or anything.

For some reason, the staff has placed a Christmas tree here. If someone lights a bonfire in this fireplace, that tree is so toast. 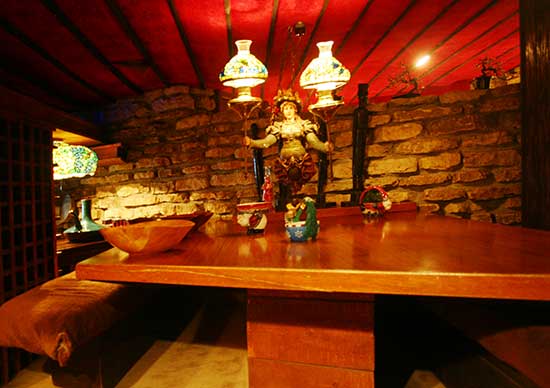 The dining room in the house. And when I say “dining room,” I mean “alcove in the side of the hallway where someone has managed to shove a table. And the carved masthead from an old wooden sailing ship.”

This guy had quite a passion for…well, for obsessive-compulsive disorder, but also for wooden sailing ships. He built an adjacent building to showcase all his model ships. The centerpiece of that building is a model of a kraken fighting a great blue whale.

It’s about two hundred feet long and nearly four stories tall. Did I mention this guy was insane?

Anyway, the masthead from the old wooden sailing ship has been repurposed here to hold a couple of lights over the dining room table. And, y’know, glower down at guests with an enigmatic expression, making them uncomfortable. 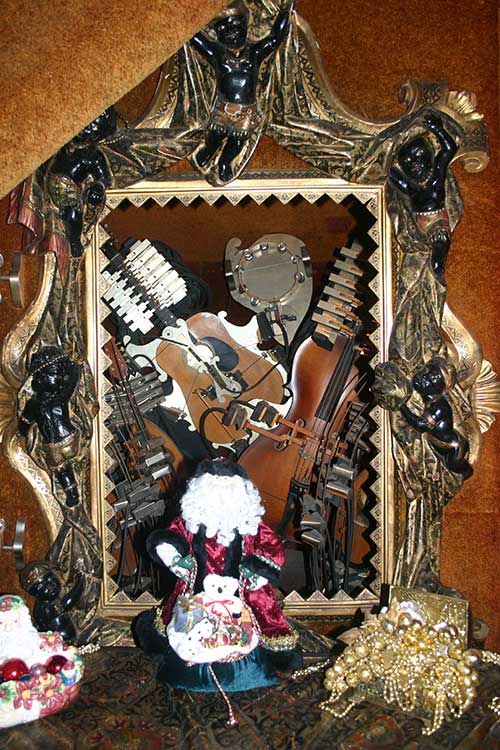 When I say “music boxes,” what I mean is “Victorian clockwork machines that play actual instruments, like drums and violins and stuff.” They are everywhere. Almost every wall, nearly every “room” has one or more of these machines set in it. This one, which has little mechanical limbs that play a guitar and a cello, is just randomly stuck in the wall near the entrance, and has little sculpted cherubs cunningly arranged all around it. 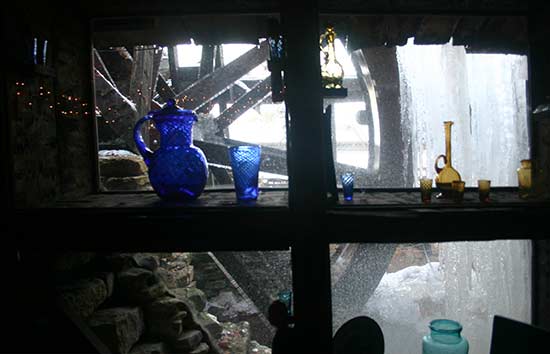 All these music machines require power, so there’s a waterwheel bolted to the side of the house.

At this point, I was so numb to the bizarre that I just kind of took it in stride and kept going. It wasn’t until days later it struck me just how truly weird this is.

This house. Has a water wheel. To drive all the hundreds of mechanical music contraptions. 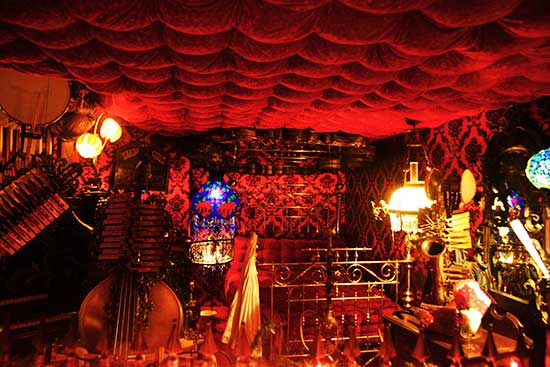 This…is a bedroom. Dear God in Heaven, this is a bedroom. It’s on an elevated platform in an alcove cut from the side of the hallway; as such, it has only three walls, no door.

Even the most casual of observers will quickly notice some strange things about this bedroom. First is the color scheme, a kind of “early Victorian meets serial killer” motif. Then comes the ever-present musical devices. Yes, that’s a saxophone, played by machines, to the right. The thing barely visible in the upper left is part of a steam calliope.

This room is the stuff of nightmares. Sweet dreams! 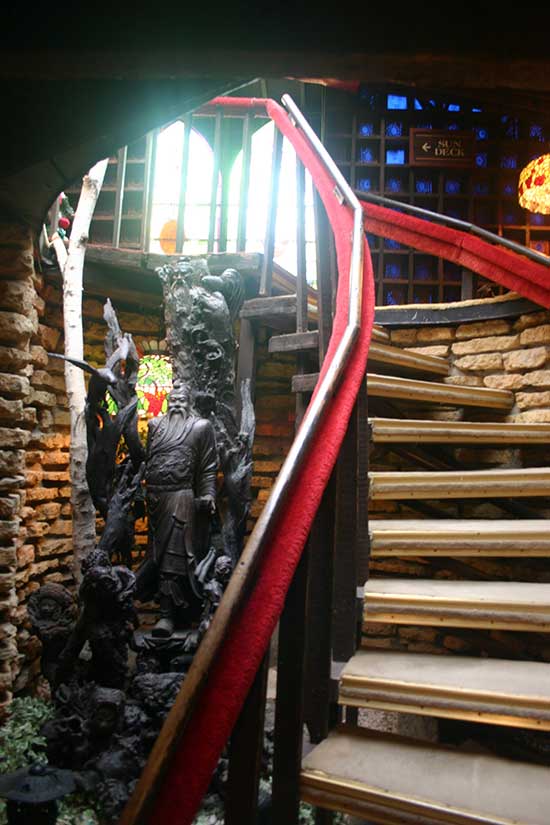 Probably the most “normal” structure in the entire house, and I use the word “normal” cautiously. Most of the house is a winding, twisty-curvy hallway that undulates up and down in strange loops and spirals without rhyme or reason, but apparently the designer engineer guy who built all this found himself painted into a corner here, with no solution other than to put in a rather conventional and ordinary set of stairs. Only, y’know, with a curve.

And a glowering statue of some sea god or other.

The people who built the supermax prison in Florence, Colorado, where they hold folks like Ted “I don’t like computers and dishwashers, so I’m gonna blow a bunch of people up” Kaczynski, is designed in such a way that the hallways and corridors always curve, so that an escapee can never see what guards might be waiting for him fifty feet on down the path. This design idea was, I think, pioneered by this house. There are no straight lines anywhere; even the goddamn stairways are crooked.