The cats and I have developed, especially since I’ve moved to Atlanta, a number of little rituals we go through almost every day.

These rituals begin when i get up in the morning. I stumble blindly into the bathroom, making noises like “rrrrrgh” and “ungggggh,” ad run the water. That’s the cats’ cue to run into the bathroom and sit on the sink while I shower.

As soon as I’m done with the shower, I turn it off and stand in the tub to towel off. At that point, Snow Crash hops onto the edge of the tub, pokes his head through the shower curtain, and starts lapping at the water dripping from the faucet. 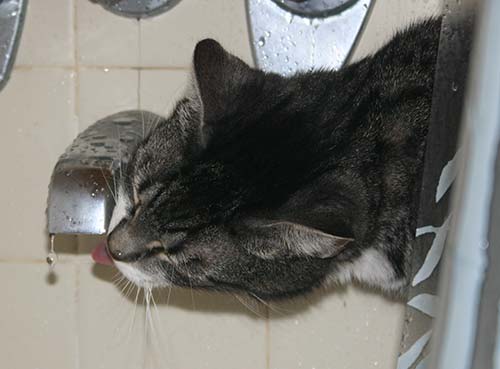 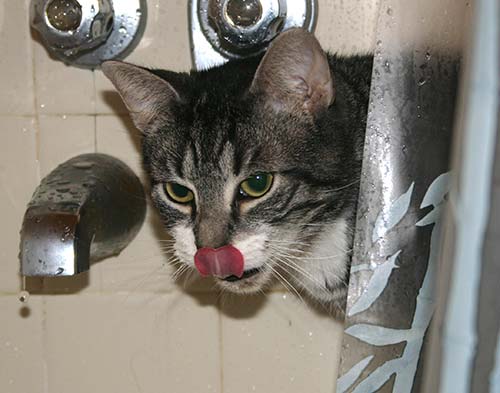 If you ever repeat the same word over and over and over again, eventually you reach a point where the word becomes just a meaningless sound, and you can hear it the way people who don’t speak English do. When you do this, some words just become inherently goofy. Like “trough,” for instance.

Now, apply the same principle to your cat. Sit there and stare at your cat, I mean really look at your cat, until you forget your perceptions of what a cat is and see it as though you’d never seen a cat before.

Pretty scary-looking, aren’t they? More than a little bit freaky, too, with these whiskers sprouting improbably from their faces…

It helps if you stare at your cat from nose level, so you can see the fangs.

If a space alien were to descend to earth tomorrow and find a house cat, without knowing anything about terrestrial biology or ecosystems, I bet that space alien would be able to tell that this is an animal that makes its living killing and eating other animals. Once you divorce yourself from the “aww, cute! They look better than our own young!” response, cats are terrifying-looking creatures. Every part of them is built for predation.

And it’s a little freaky to think that we so love sharing our homes with small, furry predators.

58 thoughts on “Cats! And deconstruction”