Earlier this week, I challenged figment_j to a rematch after the beating she put on me in air hockey a few weeks back. She took me up on the challenge, and I sought to salvage the tattered remnants of my manhood after the air hockey pasting she’d delivered to me.

Se well and truly trounced me again, decisively crushing me four games to one, just as before. I am nearing the point where I may simply have to accede to her superior air hockey skills.

After she delivered the second thrashing, we wandered around the arcade looking at all the other various and sundry video games offered for our passing fancy, all of which were lame beyond human reckoning. One of the games, the objective of which I do not fully understand, appears to have two side-by-side animated people racing over a BMX/dirt-bike style track; the players control the on-screen characters by means of two large, heavy levers with rubber bumpers. Apparently, each player can slam his lever up against the other player’s lever and attempt to knock the other player’s character off the track, or something. Near as I can tell, the game is an excuse to pummel the other player.

Anyway, it has this warning sticker affixed to it, which I photographed with my cell phone: 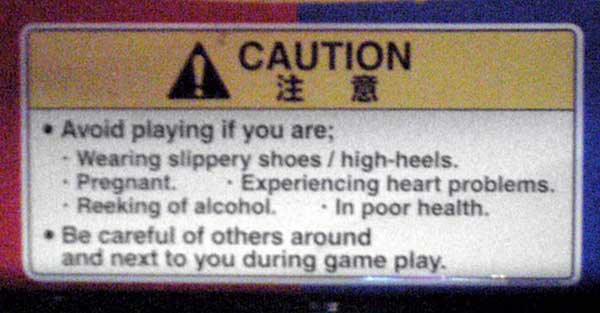 Yes, that’s right, boys and girls…don’t play this game if you are reeking of alcohol. You can play drunk, but for the love of God, eat a breath mint first!

I also think it’s interesting that it says “Caution” in both English and Japanese, but the rest of the label–presumably, the important bit–is only in English. (At least, I assume it says “Caution” in Japanese. It may actually say “Silly roundeye, we will kill you!”–I don’t know.)

20 thoughts on “Warning: do not use this blog if reeking of alcohol”