Shelly and I have season passes to Busch Gardens. On weekends, we like to go there and hang out sometimes. Busch Gardens has a “wild animal encounter” section where you can go nose to nose wih various animals, separated only by Plexiglass.

We went there last weekend. Among my favorite animals at Busch Gardens are the hyenas; I took a picture of this fellow some time ago: 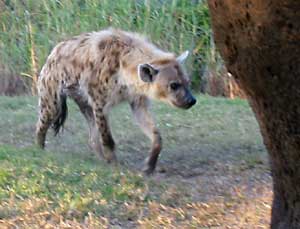 I have heard many, many people say “Oh, those hyenas are ugly!” when they look at the hyena display. Hyenas look a bit like dogs; but they look like poor dogs. If you compare a hyena to a domesticated dog or to a wolf, they look all kinds of wrong–heads too large, snouts shorter and sloping, necks longer, fur all short and spiky. As dogs, yeah, they’re pretty ugly.

And I think that’s very interesting.

We’re very, very good at looking at people. We have a part of the brain just dedicated to parsing faces. Even tiny, almost unnoticable inconsistences in the way photorealistic characters move look off to us. A character that is nowhere near a real human being is fun to watch; a character that is rendered almost perfectly, but not quite, is creepy. If there are tiny flaws in the way the characters move and the way the characters look, we notice. (i had this problem withthe “Final Fantasy” movies–the characters looked great as long as they were standing still, but whenever they moved, it just looked all kinds of weird.)

On another forum I read, there’s a conversation about how significant a person’s physical appearance is to a relationship. There seem to be two basic camps; the “I could never date someone if he isn’t gorgeous” camp (which tends to resent being called ‘shallow,’ even though that is in fact a shallow attitude; the word ‘shallow’ merely means ‘penetrating only the easily or quickly perceived’ in this context, or so says my dictionary; and if people want to base their relationships on the surface or easily perceived, hey, more power to ’em. Nothing wrong with that, as long as they’re up front about it…but again, I digress); and the “If I love someone, I can see past their flaws and imperfections and be attracted to them in spite of the way they look” camp.

Me, I don’t belong to either camp. And i think the hyenas are beautiful.

You see, the people who don’t like the heyenas are to some extent, I think, judging the heyenas on the characteristics of a dog. And a hyena does not look like a dog. If one looks at a hyena and tries to impose the shape of a dog on it, the heyena doesn’t fit very well. Heyenas are damn ugly dogs, especially if your idea of what a dog should look like is informed by, say, a wolf.

But a hyena is not a wolf, nor a domestic dog; and as an example of an animal viewed in its own light, it’s gorgeous. If you look at a heyena without trying to impose the shape of a dog on it, it’s a beautiful, powerful, graceful animal. I love hyenas.

If you look at my past and current partners, they are physically all over the map. And every one of them has been beautiful–not because I have a standard of beauty that is flexible, but because my appreciation of what someone looks like is shaped by my experience with that person. A person to whom I am deeply connected always looks attractive to me; a person to whom I am not, does not. I don’t fully understand “Well, if I love someone I’m attracted to her in spite of what she looks like;” when I love someone, I am attracted to her because of what she looks like. Everything about that person is attractive to me; it’s not a question of “getting past” or “looking beyond” whatever perceived ‘flaws’ she has. All of these things make her who she is.

It’s taken me a while to understand why people even talk about what physical traits they require in their partners, or even have those requirements in the first place, and I’m not sure if I’m quite there yet. But the hyena is helping.