…and many weeks to catch up on. It’s been a busy, exhausting, overwhelming, and fun few weeks.

I have not read LiveJournal in over two weeks now, so if I’ve missed anything anyone finds particularly compelling, now’s the time to say so. 🙂

So on to the past few weeks!

Two weeks ago last Saturday, smoocherie came into town and we went to the movies. Sound like an ordinary evening? Wait; it gets weirder.

An old friend from many years ago was in town from Seattle, and rang me up to see if we could get together. We invited her to go see the movie with us; Shelly and smoocherie and I were meeting another old friend, Charlie, to see a documentary on an Indian religious festival, Kumbh Mela, called Shortcut to Nirvana. The film’s director, Nick Day, is a friend of Charlie’s, and was on hand for the movie.

If you’ve never heard of the movie, I strongly recommend it. You can find it on DVD on the film’s Web site. The Kumbh Mela is thew largest gathering of people anywhere for any reason in the entire history of mankind, yet very few people outside of India have ever heard of it.

Got a photo op of the group of us at the theater: 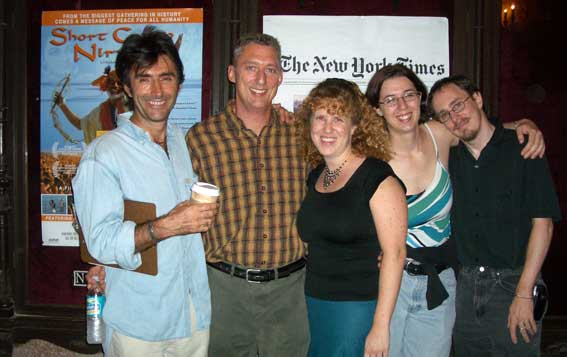 Nick, Charlie, smoocherie, Shelly, and me

After the movie, we all kidnapped Nick and decided to show him around Ybor. First stop: sushi! We talked about religion and God and the role of science and philosophy and HBO’s awful series Sex and the City…Nick is intelligent, articulate, and very well educated, and a fascinating speaker.

After dinner, my Seattle friend, who had already seen the movie and skipped the film to go out partying, invited us to a lesbian bar.

But not just any lesbian bar…rather:

The most dreadful lesbian bar in the world

I say that with complete confidence, even though I have not, in fact, been to every lesbian bar in the world. I can state with absolute certainty that even in the blackest heart of Calcutta in the days leading up to the Great War, you would not have found a more dreadful lesbian bar.

It’s not just the place. The bar itself wasn’t particularly dreadful; a tiny, almost unnoticeable hole in the wall, reached by a steep flight of narrow stairs leading into darkness…uncomfortable certainly, but not especially dreadful.

A truly dreadful experience has to be a well-rounded experience, and indeed this bar fit the bill.

Imagine a cramped, narrow bar that’s mostly a dance floor, with a tiny stage on one end and a distinct lack of usable facilities. Now, cover every square inch of the place in dreadful Halloween decorations from the local Wal-Mart. Still not especially dreadful overall, but moving in that direction.

Now stage a completely over-the-top drag king show in this place. Still not dreadful; drag king shows are supposed to be over-the-top, right? Ah, but here it comes, the piece de resistance: Imagine that this show is being overseen by a huge, and very loud, MC who sincerely believes that the height of wit is insulting the patrons at the top of her voice, while jumping up and down and sweating profusely, and then cause the sound system to fail intermittently. The sound system is an important element because when it failed during a performance, it made it just that much easier to hear the MC singing along to the song.

These words can’t really convey the dread of the place, in much the same way that calling Great Cthulhu a smelly squid can’t adequately communicate the horror of the Great Old Ones. The combined experience was the stuff of which Lovecraft novels are made.

Nick and Charlie were good sports about it all, and eventually the group of us fled with at least seventy percent of our sanity points intact. smoocherie even managed to get in some wiggling with my friend, which was great fun to watch, despite the multitude of horrors around us.

Downtown Ybor is currently home to some of the most fascinating grafitti I’ve ever seen, and seems to be a sort of Mecca of grafitti these days; I took pictures of many interesting specimens, which I had planned to share with all of you. Unfortunately, I pressed a wrong button and inadvertently deleted all of the images from my camera. Perhaps later.

The rest of the weekend was much more placid–shopping for fetish clothes with smoocherie and generally ignoring the impending threat of the hurricane, which passed us by with nary a problem. We heard a techno cover of the Clash’s Rock the Casbah in one of the fetish stores, which just goes to show you.

6 thoughts on “I have such sights to show you…”