This weekend, Shelly and I both got some new tattoos. We both got the same tattoo, but not for the reasons you might think.

The tattoo itself is the Kanji for “Hope,” and looks something like this: 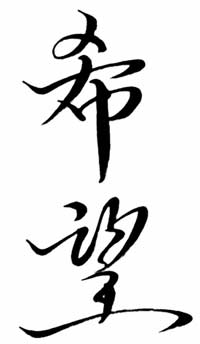 We each got the characters on the inside of our right wrists. And no, it has nothig to do with the fact that we’re dating, and everything to do with a set of shared values about the future.

Every day since I was very young, every single day without fail for my entire adult life and most of my childhood, I have been aware of the fact that someday, I’m going to die. This has been a universal constant of the human condition since we first began using language and making tools. There’s no getting around it; the unescapable, inexorable reality of death has fueled the fabrication of entire complex paradigms and mythologies, all designed to reassure their believers that once you get past the grave, if you but only follow some arbitrary and manufactured set of rules, nothing can go wrong.

This has been the reality of the human experience for all of human history…until now. Now, for the first time ever, we can see a mechanism by which aging and death can be circumvented. We aren’t there yet, but we know it is possible. On the horizon, we can see a reality in which old age is no longer a part of the normal human reality, and death is not inevitable. We can see the mechanisms responsible for these things. We can see that these mechanisms can be manipulated. We know that altering these mechanisms does not violate any fundamental law of physics. At this point, it’s simply a question of figuring out how to do it.

Two years before the Wright Brothers flew, Lord Kelvin, the famos physicist who lent his name to the Kelvin scale of temperature and whose work was instrumental in understanding the nature of heat and energy, the man who helped contribute to our basic knowledge of thermodynamics, stated flatly and absolutely, “Heavier than air flight is impossible.” When it was pointed out to him that birds are heavier than air and birds fly, he answered to the effect of “That’s different–birds are alive.”

In fact, he was wrong for one simple and obvious reason: The fact that birds can fly demonstrates clearly and beyond refute that heavier-than-air flight violates no fundamental law of physics. History shows us that that which does not violate the fundamental laws of physics can, eventually, be done; it’s simply a matter of having the will and the time to figure out how to do it.

Nanotechnology promises something no other branch of human exploration has yet promised: the ability to, on an atomic scale, order molecular systems in any way we wish that is not prohibited by the laws of physics. Human beings are molecular systems; the laws by which cellular biology work are becoming very well understood, and when reduced to its simplest components, any biological system is simply a complex system of self-replicating biological machinery, operating in accordance with physical laws to construct large-scale macroscopic systems from small-scale molecular assemblers. Molecular assembly, like heavier than air flight, does not violate the laws of physics; we know this because we see large-scale systems built by molecular assemblers every day. Biological systems which do not age and die do not violate the laws of physics; we know this because we have examples of such systems, in trees that live for four thousand years and microbes that can survive for twenty-five thousand years or longer. Changing the operation of biological systems in arbitrary ways can be done without violating the laws of physics; we’ve known this since the advent of the first drugs, and advances in gene therapy have demonstrated that almost any result we want in almost any biological system is at least theoretically possible.

So, back to the tattoo. I am living in one of the first generations in all of human history where we can honestly say we are beginning to understand the physical mechanisms of aging and death, and we can see ways those mechanisms may be altered. Will it happen soon enough to save me? It’s a long shot. But make no mistake about it: we are fast approaching the first generation of human beings who will be born into a world where old age and death are not inevitable. There is hope–not only for me as an individual, but for us as a species. Erasing old age and the inevitability of enfeeblement and death will transform the human condition in ways that we can not hope to predict, and are at least as profound and as deep as the development of language.

I will do everything in my power to be there to watch it happen.

So. Now I have hope, and hope is a powerful thing.

4 thoughts on “On hope, death, and life”