The Japanese don’t do candy the way we do candy.

Tucked away in the box of chocolate lacaba sent me for my birthday was a box of Japanese candy called “Botan Rice.” Imagine, if you will, something vaguely like a gumdrop, only cube-shaped. Seems simple enough, right? Oh, no, no, no. 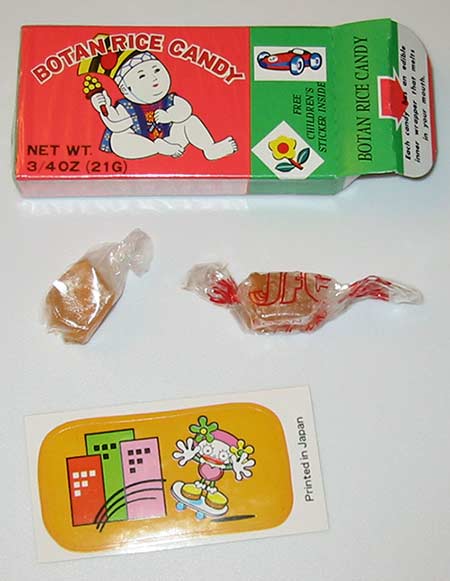 The box features a strange roly-poly man in vaguely Aztec garb holding…um, I’m not rally sure what he’s holding. It’s a handle of some sort, with a bunch of balls stuck on top, and he’s holding it in a way that suggests perhaps it’s used to bash somebody’s head in or something. (American culture is a lot more violent than Japanese culture, but as with many things, the Japanese seem to be better at it; they actually study this stuff, formally, with the result that any Japanese citizen over the age of two can singlehandedly kick the asses of an entire Montana militia group. But I digress.)

In any event, the strange man on the box is supposed, I guess, to tempt you with the sugary delights inside, or perhaps to suggest that he’ll kick your ass with whatever it is he’s holding if you don’t buy the candy. Assuming that the ploy works, you find yourself with a box slightly smaller than the boxes of gumdrops they sell at theatres, which promises “Free children’s sticker inside.”

Now that is actually a pretty effective gimmick. I know when I was a child, I could never resist the promise of a free surprise. I would spend hours in the cereal isle of the grocery store, agonizing over what to get (‘Cap’n Crunch tastes the best, but this box of Boo Berries has a glow in the dark whistle inside, and you can’t get enough of THAT for my entertainment dollar!’), so if Japanese kids are anything like American kids, the best way to get them to buy your product is good old-fashioned bribery. Hell, I would have bought laundry detergent if they put a glow-in-the-dark whistles inside…but again, I digress.

Once you open the box, things start getting stranger. The Japanese, with their legendary attention to engineering detail, have solved the most vexing of all gumdrop-like-candy problems: the tendency of the candy to stick together in a gooey, gelatinous mass that sides in one lump out of the box and onto your lap. No embarassing candy incidents here; each candy is individually wrapped in cellpohane, probably in the state-of-the-art robotic factory where multimillion-dollar robot arms carefully pick up each candy in a choreographed ballet of Japanese engineering supremicy and wrap each one before carefully slipping it in the box.

Doing this is a bit like what you’d expect if you, say, bit into a caramel square without unwrapping it first–but only for a second. Then the inner wrapper simply disappears, without a trace, and it’s all smooth sailing.

The Japanese have dispensed with the Da-Glo dyes, preferring instead to let the candy speak for itself.

And it does. It’s really, really good. I mean really good. American candy makers should send their engineering teams to tour the Japanese factories, kind of like the American automotive engineers did in the late 70’s when we were still trying to figure out how to manufacture cars that didn’t magically turn into a pile of scrap metal the instant you lift the door latch. So good, in fact, that you could probably sell it to American kids without bribing them with free stickers.

In America, the sticker would probably have a picture of a jet fighter or a corporate mascot like Barbie or Mickey Mouse on it. The sticker in my box of Botan Rice Candy had a picture of a strange, large-mouthed alien girl riding a skateboard…sideways.

Now, I’m no skateboarding expert, but I know you don’t ride skateboards that way. My sister rode a skateboard that way, once, when she was young, and she promptly broke her arm. So clearly, the alien girl on the sticker is either an amateur skateboarder, or has a reckless disregard for her own personal safety that borders on suicidal.

In the background of the sticker are three objects that represet either buildings or multicolored rectangles with smaller squares inside of them, I’m not quite sure which. If they’re buildings, there seems to be a perspective or size-relationship issue, as by my calculations, the girl would be…oh, about eighty feet tall or so. (Maybe that’s it. Maybe Skateboard Girl is one of those giant monsters that periodically comes along and flattens Tokyo….”Aaaah! Run! Hide! It’s SKATEBOARD GIRL!) I’m not quite sure what one would do with the sticker–put it on a skateboard? Use it to ward off giant city-destroying monsters?–but the candy is good.