Only a few days out from the end of 2021, and man, what a ride. I don’t usually do restrospective years-in-review, but this year…fuck me sideways.

I’m not saying it’s been a bad year, mind. On the contrary, this has been the single most productive year of my life, creatively speaking. My co-author Eunice Hung and I wrote, not one, not two, but three novels this year, in two unrelated genres: far-future post-scarcity science fiction theocratic erotica, and near-future dystopian post-cyberpunk. (Well, near enough, anyway. We have about two thousand words left to go on the cuberpunk novel. Might juuuuust squeak by.)

Two of those novels are slated for publication in 2022, the third in 2023. Yes, we’ve got manuscripts that are two years out.

One of the novels coming out in 2022, The Hallowed Covenant, I am more proud of than anything else I’ve ever written. 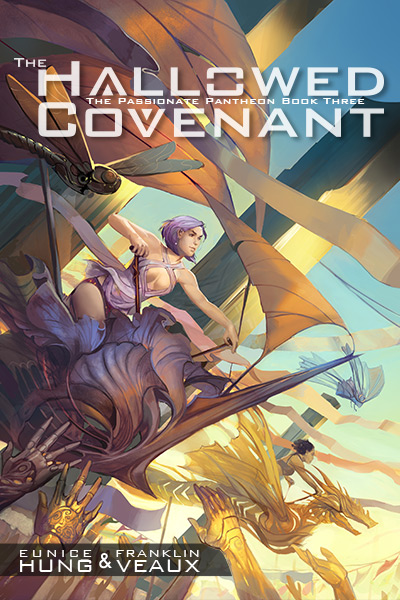 Isn’t the cover gorgeous? I love the way it calls back to classic book covers from the Golden Age of science fiction.

A tall, striking woman wearing nothing but a simple wrap of translucent red fabric around her waist greeted them. The left side of her body was black as darkest midnight, the right side as pale as new-fallen snow. Complex fractal patterns of light and dark swirled slowly down the center of her body where the two shades met. Her long, straight hair was black on the right side and pale on the left. As she moved, her hair changed color, so that the division between black and white always remained still. “Welcome! My Festival name is Rainshadow,” she said in a low, throaty grumble that made Yaeris’s mouth water. “Would you like to play a game of chance?”

Lyrin tilted his head. “What kind of game?”

“It’s simple, really,” Rainshadow purred. “You spin the wheel like this.” She sat gracefully in one of the chairs and spun the large wheel set into the table. With each fluid motion, Yaeris felt her heart hammer.

Rainshadow dropped a ball onto the wheel. It bounced around for a bit, then, as the wheel slowed, fell into a red slot. “If the ball lands on red, you drink a red vial. If it lands on black, you drink a black vial. Then you allow me to tie you to my bed, where I do wonderful things to you.”

Lyrin shivered, his expression dazed. “What happens then?”

Rainshadow smiled. “I offer you the most exquisite pain. I worship the Lady by making pleasure into art and worship the Wild by making art out of intensity.”

Rainshadow rose. “Which one?”

“Oh, you sound like fun. Do you want to play? You must promise to follow through before you spin.”

Holy shit! This year I finally launched a podcast I’ve been thinking about for over a decade! My wife Joreth and my co-author Eunice and I finally, after all these years, sat down and got serious about The Skeptical Pervert, a sex education show that takes an evidence-based, factual, empirically supportable look at ideas, myths, and ttopes about human sexuality.

We plan on putting out one episode a month, and right now we have episodes recorded to February and planned out to April or May.

You can find it on Apple Podcasts, Libsyn, Spotify, Amazon, and most other podcatchers, plus of course on Facebook and Twitter.

You can find the spiffy Team Tentacle T-shirt Eunice is wearing here.

If you read my Twitter feed, you’ll know this has been a year of cats. A feral cat had a litter of kittens beneath our front porch, which means, of course, we’ve been caring for them. Earlier this year we caught the ferals, took them to the vet to be checked for FIV and vaccinated and fixed, and we’ve been caring for them since. They’re still not pets (or as close to pets as cats ever are), but they’ve become friendly and allow me to pet them.

Mama cat is totally feral; she’s allowed me to pet her only once, when squishy food was involved, but mostly you can’t get near her. We trapped her with a live-catch trap and took her to the vet for shots and spaying, then let her go after she recovered.

Some of the kittens the day they went to the vet:

I really, really like the tortie. Zaiah calls her “Eclipse.” I’ve been working to try to get her to trust me, and she’s allowed me to pet her several times.

They all come to the porch for food, and live beneath the porch when it’s wet and cold outside. Here’s three of them, hitting me up for food:

The orange boos are the most tame. They’re basically not even feral at this point–they’ll frequently try to push their way into the house when I open the door. A few days back, one of them ran into the house, and while I was trying to chase him out, the other one ran in too.

When we first started caring for them, they were skittish and would flee at the slightest movement. Now they won’t even get out of my way when I come home with a bag of groceries; they make me step over them.

I’ve still been grinding away at the massive archiving job scanning all the 35mm film from my days as an amateur photographer. I thought I’d be done by the end of the year, but that was before I found two more boxes of negatives. I have, no exaggeration, thousands of frames left to scan. 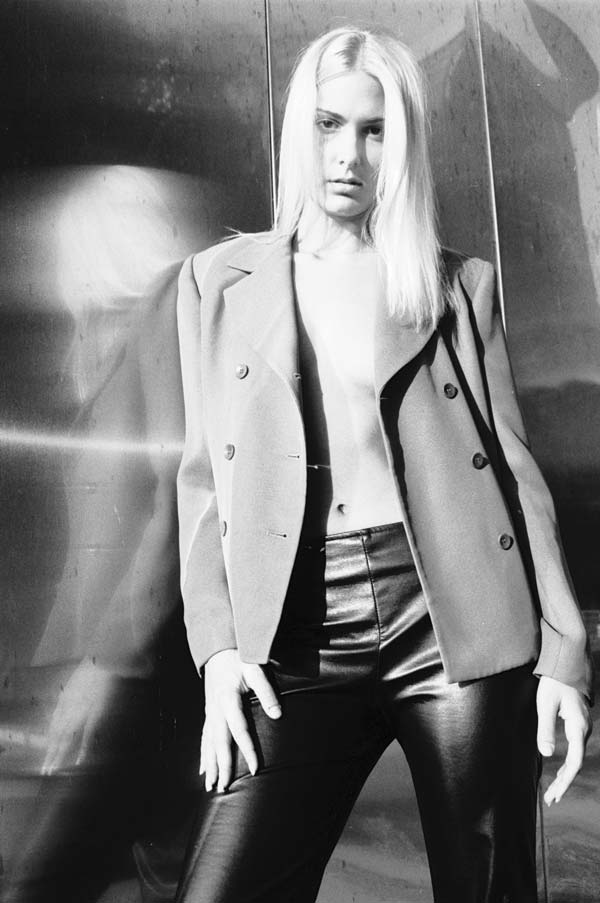 This shot dates from the late 90s or early 2000s, somewhere thereabouts. I foolishly didn’t think to record dates when I filed the negatives.

Eunice and I wrote three novels in 2021, which made it the most productive year of my life, but we’re planning to write four in 2022, in two different unrelated genres. Writing with her has been an extraordinary experience. We mesh better than anyone I’ve ever created with before. In fact, so many people have asked us how we write together we’re planning to live-stream the start of one of the novels, which should be a ton of fun.

The extended polyamorous network was supposed to go to Barcelona in 2019 for a group vacation. COVID, of course, scuttled that, but we plan to try again in 2021. A dozen kinky people in a castle in Barcelona sounds like a blast.

Plus visiting the Sagrada Familia, Antoni Gaudi’s Gothic masterpiece, has been on my bucket list for decades.

Joreth and I are also planning a cross-country trip in her RV, photographing abandoned amusement parks. In the late 90s and early 2000s, the bottom fell out of the industry, and a lot of operators just walked away. These parks have been left to decay for the last couple of decades, and many of them are now in a glorious state of ruin. We plan to put up an Instagram or maybe even publish a coffee table book of photos of amusement parks quietly returning to nature.

We also plan to drive the Dalton Highway, the world’s northernmost road, in 2023. It runs from Fairbanks, Alaska to the Arctic Ocean, and should make for a spectacular photo tour.

I also have been invited to participate in a couple of projects and started a third project I’m not quiiiiite ready to talk about yet. Stau tuned!

So as extraordinarily creative as this year has been, next year will, I think, be truly marvelous.