A short while ago, someone on Quora asked the question, What is the kinkiest sex toy you have ever used? It’s a tricky question, but not for the reasons you might think. And I’m afraid the answer involves math.

And prime numbers. Hang on, I’ll get to that.

I own three violet wands. I sometimes use one of them with a body contract probe while I hold a giant Medieval battle axe. Touching someone with the axe causes all these lovely blue sparks to jump from the axe to the person I’m touching. There are folks who think that’s kinky, and folks who are like “Violet wand? Ho hum.”

I have a set of poi-handled floggers. I can spin them the same way I spin fire, flogging the holy hell out of a partner while looking stylish doing it. I recently did so to my wife in front of a small audience. But at the end of the day, no matter how flashy your technique, floggers are still floggers—they’re pretty much entry-level kink toys. 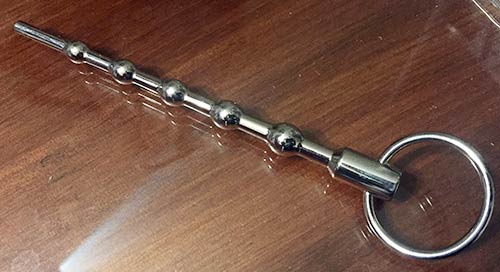 The sound almost got me in trouble, in fact. I was flying back from the wedding when the TSA agent ran my carry-on bag through the security X-ray multiple times, then finally tore it apart and found the sound, which was tucked (naturally) in my toiletries kit.

“No, it’s a sex toy,” I said, and explained how it was used. He tucked it hurriedly back in my bag and waved me on my way.

Even a lot of hardcore kinksters wince and cover their nethers at the notion of sounding, but that doesn’t necessarily make a sound a kinky toy; the first time Maxine ever sounded me, she used a smooth aluminum chopstick. Are chopsticks kinky?

That’s the problem with asking “what’s the kinkiest sex toy you’ve ever used?” Kink is in the person using it, not in the thing itself.

So let’s talk kink. And math. And probability. And prime numbers.

Right now, the kinkiest thing in my repertoire is probably this: 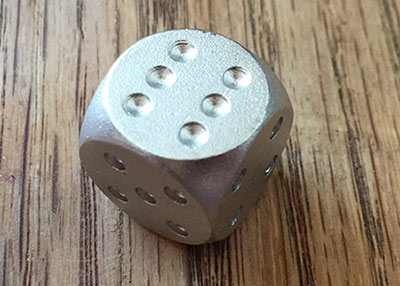 It’s a six-sided die, unremarkable except that it’s made of aluminum rather than plastic, because metal dice are cool.

Before I headed out to Europe for SquiggleCon, my wife, my partners, and my crush started a private Facebook group to discuss what to do with me. Or, more accurately, to me.

It was generally agreed that if I was to be in Europe at an extended orgiastic gathering in rural England, I should be in the proper…err, frame of mind for the event.

So the women in my life schemed and plotted, and hatched a Plan.

For the six weeks prior to flying to Europe, I would, each day, roll one six sided die. The day’s roll would be multiplied by the previous day’s roll, producing a number between one and thirty-six. That number would be the number of times I would edge myself that day.

Orgasm, however, was strictly forbidden.

When I was lying in bed one night after a particularly long session of self-non-gratification, my mind went, as it often does, to mathematics. I tried to figure out what the probability distribution for multiplied dice rolls was.

This is not easy to figure out.

If you add dice rolls, you get a perfect Gaussian distribution, as any player of pen and paper role-playing games well knows. The distribution of two six-sided dice added together looks just like you’d expect it to.

Look at that symmetry! Look at that perfectly even distribution! You know what you’re getting, when you roll 2d6.

But what happens if you multiply the numbers instead of adding them?

Well, then the situation goes all cattywumpus. There is no beautiful symmetry, no lovely, lovely Gaussian distribution. The probability graph is disconnected and helter-skelter.

One thing you might immediately recognize is that when you multiply the results of two six-sided dice together, you can never get a result that’s a prime number greater than 5.

What’s less intuitively obvious, until you think about it just a bit more, is you can also never get a number that has a prime factor greater than 5. 14, for example, is right out. 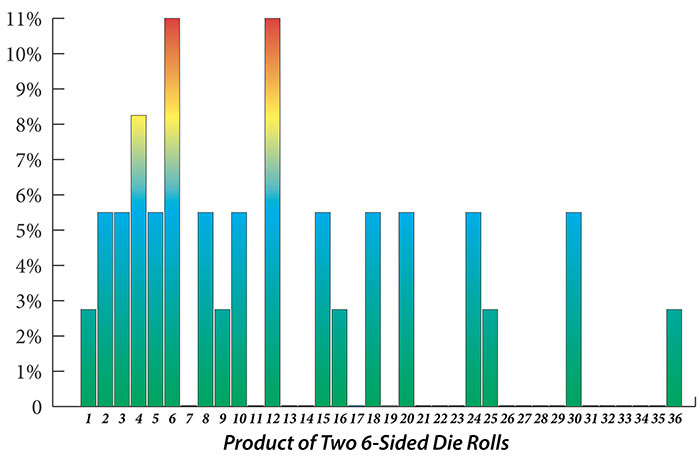 Just…just look at that abomination!The most probable numbers are 6 and 12, with about an 11% chance of either. There’s a great void between 25 and 30, and another between 30 and 36. You can get a 1….and it’s exactly as probable as getting a 9.

It’s a bit more useful to look at the probabilities as a matrix rather than a graph. When you do, you see that this matrix has interesting properties along every row, column, and diagonal. 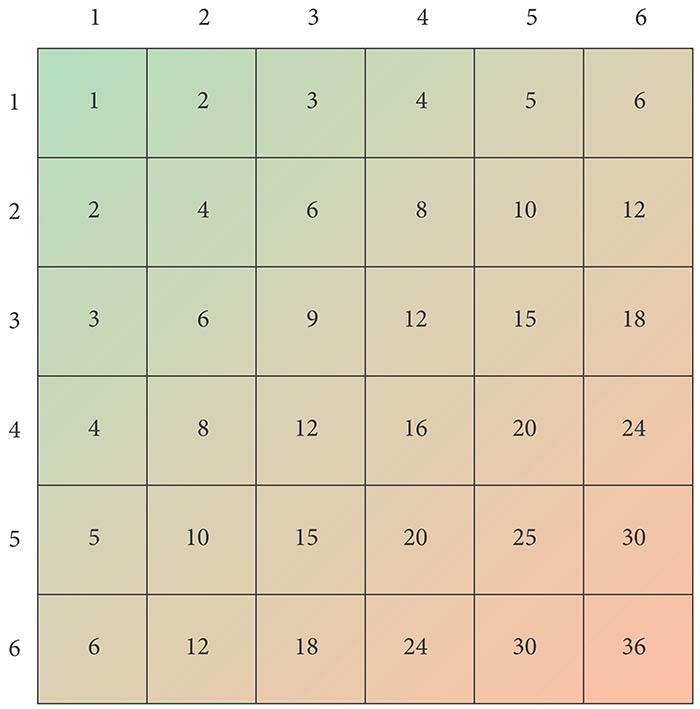 This mathematical construct shaped my experience every day for more than six weeks. This seething, chaotic mess had me a seething, chaotic mess by the time I arrived in Europe. With the poi-handled floggers and the sound and the other kinky toys I own (lesson learned, by the way: put your sounds in checked luggage!).

Kink is always in the people. Using dice to change someone’s psychological state so as to make them more obedient and open to suggestion? I’d say that’s…relatively kinky.

The sound did end up getting used (several times, once while I was wearing the straitjacket), but is that the kinkiest toy I’ve used?

1 thought on “Fragments of SquiggleCon: Sex and Probability”