I am old enough to remember Richard Nixon.

I was in first grade during the 1972 campaign. My class had a mock election, in which I cast my “vote” for Nixon. Why? I have no idea. I was six; I liked his name better than that other guy, George Whoeverthehellitwas.

I remember the aftermath—Watergate, the resignation, the whole sordid mess. At the time, I recall thinking that this whole business of politics was a bit of shambles, and I’d probably never see anything worse. Ah, the optimism of youth.

Then, of course, came Bush/Gore, with the confusing ballots and the hanging chad and the election ultimately decided by the Supreme Court, some of whose members Bush’s father had appointed. I remember Nader thinking he was all that, and Nader supporters thinking he was all that, and the peculiar brand of ardent zeal that has its roots so deep in the American psyche—the “take no prisoners, brook no compromise” approach to elections that usually ends up in the worst of two evils taking office.

I see that same cycle playing out again this election, which has unquestionably brought yet a new low to the American civic institution of voting. And I see the same arguments being put forth by a fresh new crop of take-no-prisoners, brook-no-compromise idealists absolutely convinced their candidate was the Chosen One, even though those of us who’ve been around longer knew he was unlikely to win. (Sorry, Bernie.)

And I see now, as I did with Nader supporters, a lot of folks saying “if I can’t have my candidate, why should I vote for anyone? I don’t want to vote for the lesser of two evils, I want to vote for someone who really represents me!

Which sounds reasonable right up until the moment you realize it’s not. Because, you see, the world is not all about you. 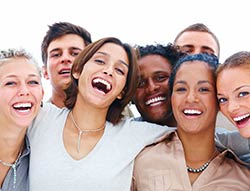 One of the hardest lessons to learn in life is this: Other people are real. The world isn’t the Story of You. Yes, I’m sure you’re amazing and all, but other people are not supporting characters in the movie called You: The Reality.

They deserve to be heard by the government that we live under, just like you.

A person who says “I want a candidate who represents all of my interests” is a person who’s saying “fuck all those three hundred million other people; I am the only person who should count.” And it doesn’t—it can’t—work that way.

A political candidate is not all you, all the time. In any reasonable democratic system, you will always be voting for a candidate who does not perfectly represent you, because it isn’t all about you. A candidate must represent everyone, not just you, and a lot of people—real, legitimate people—are not like you. “Choosing the lesser of two evils” is just a self-focused way of saying “choosing a candidate who is not a clone of me, but who will, I think, better represent me than the other person will.”

This is a huge problem for progressives, who rightly are horrified when they see candidates attempting to disenfranchise broad swaths of the population (gays and lesbians, say, or religious minorities, or women) but then in the same breath turn around and say “I refuse to vote for someone who I don’t 100% agree with 100% of the time”—not recognizing that if the government were made up of people who 100% agreed with you 100% of the time, it would disenfranchise a whole lot of folks who are not like you.

Maybe not as directly as some politicians disenfranchise gays and lesbians or minorities, but make no mistake, it would still disenfranchise them just the same.

If a pluralistic society is to function, it must do so by recognizing that people have legitimate differences, and seeking to make sure that the voice of the government is not solely the voice of one demographic, or one person. This world is not the Truman Show, and you are not the starring character.

In this election, there has been no candidate who I agree with on all the issues all the time. And you know what? I’m okay with that. My job is to select a candidate who I think will best create the society I want to live in, while still recognizing that other people have to live in it too.

In the 2000 election, a lot of folks said there was no difference between Bush and Gore. That turned out, on hindsight, to be laughably, comedically wrong…and we’re still paying the price. (Would Gore have led us into an invasion of Iraq post-9/11?)

I see that same thing being spouted in this election. There’s no difference, I hear people say with a straight face, between Hillary Clinton and Donald Trump. And I boggle.

Or at least I did, until I realized what it actually means: “there is no difference between Hillary and Trump” actually means “I don’t agree with Hillary and I don’t agree with Trump, so I mentally place them both in the same cubbyhole.” Which is, I think, a bit like saying “I don’t eat eggplant and I don’t eat arsenic, so they must be the same thing.”

That’s more than a little disingenuous. I don’t like eggplant and I don’t like arsenic, but one of them is a whole lot worse for me than the other. Given the choice of eating one or the other, it’d be pretty stupid to claim I don’t see a difference between them.

We live in a pluralistic society. One of the current candidates is okay with that; one is not. I understand that a lot of folks are disappointed that their guy didn’t win. I get it. That sucks. Of the choice ahead, though, one person better represents the values of a pluralistic society than another. And when you say “it’s my guy or bust,” you’re basically saying that you don’t care for a pluralistic society; you want things all your way or no way at all. There is a candidate who represents that view, but you might not like living in the society that results from his election.