Bodie, California is a classic nineteenth-century California gold rush town. It’s high atop a mountain in the desert, and every part of the town exists for one purpose alone: to facilitate the extraction of gold from the surrounding hills.

This is a view of the mill from what’s left of the bank, which was, not coincidentally located right across the street. 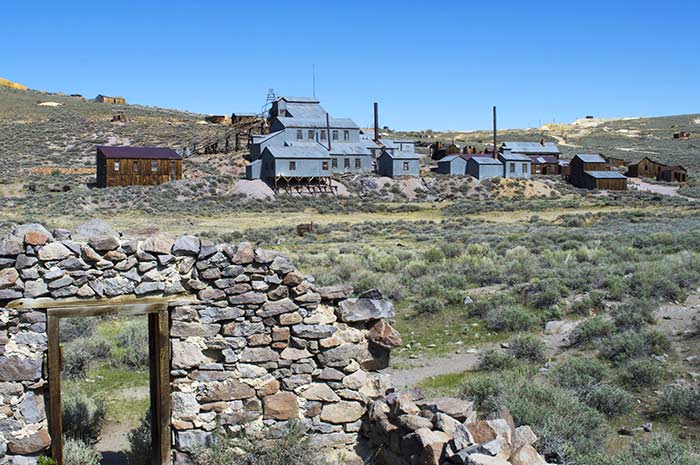 In principle, a stamping mill is relatively straightforward. Ore goes in the top. It’s crushed into a fine powder—”about as fine as flour,” the tour guide said—by large mechanical hammers. Then, and this is where the famed Victorian indifference to human life really shines, the powder is sifted across a pool of mercury. The mercury reacts with gold to form a mercury-gold amalgam, which becomes a semi-solid mass that workers roll up into a ball and stick in a safe (I swear I am not making this up).

The rock doesn’t stick to the mercury and is discarded. The ball of hideously toxic mercury-gold amalgam is then, get this, placed in a furnace, where the mercury is boiled off, leaving molten gold behind. The molted gold is poured into bars, assayed, and then shipped off down the mountain.

The whole fearsome, dangerous, mind-bogglingly toxic process begins with getting bits of gold ore into the top of the stamping mill, which is done via conveyor belts. 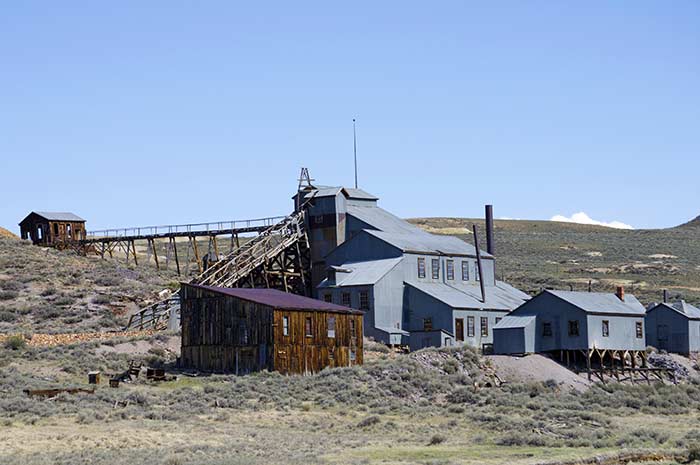 Rain or shine, summer or winter, the gold ore is hauled into the small brown wood building behind the mill, situated atop a hill because Bodie often saw 20 feet of snow in the winter and the mine operators were stubbornly unwilling to let a little thing like that stop the flow of money. The building in the foreground with the very narrow chimney is the furnace where the mercury was boiled off, and I can’t believe I’ve now typed that phrase twice.

The mercury. Was boiled off.

Bodie is about money. That’s it. From stem to stern, everything about the town was in service of making money. The Victorians, ever practical, used whatever new technologies would help with that endeavor, and cast off whatever bits of technology were no longer useful. Even now, the ground around the mill is littered with broken bits of machinery, like this cast-off drive belt made of woven iron. 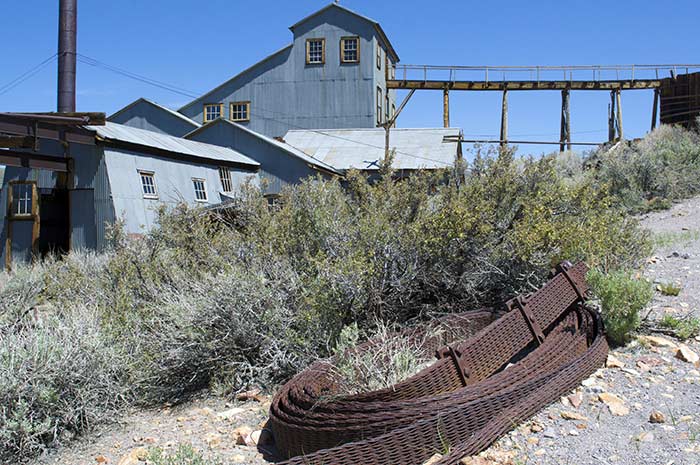 Or this enormous camshaft. His thing was mounted to an axle driven by an absolutely huge, room-sized steam engine or, later in Bodie’s history, an almost equally ginormous electric engine. The camshaft spun around and as it did, the cams lifted and then dropped hammers that crushed the rock. The hammers were more than a story long and weighed over a thousand pounds apiece. The din, according to the tour guide, could be heard halfway up the mountain. Workers wore cotton in their ears to keep from going deaf.

It didn’t work; deafness was a common problem among stamping mill operators. So were horrifying industrial accidents, mercury poisoning, and in at least one case, being sliced in half by a drive belt.

This being a Libertarian paradise, an injured, poisoned, or deafened worker was fired, given a couple of hours to pack, and kicked out of town. 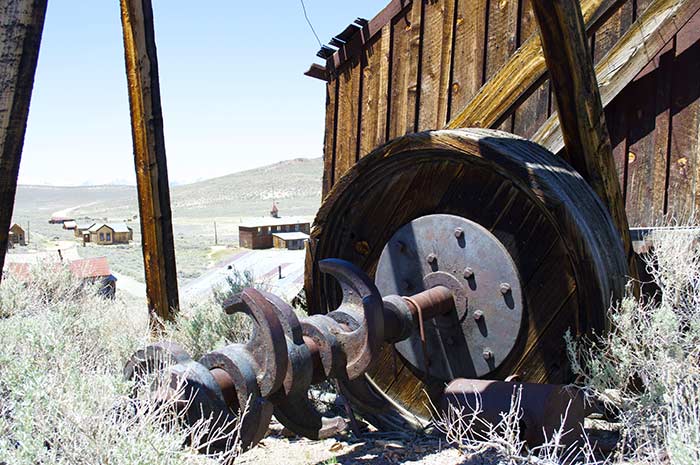 Our tour started with the machine room, which was, naturally, the second most important part of the stamping mill. The mill had a state-of-the-Victorian-art workshop, with lathes, presses, and other metalworking equipment able to repair or even fabricate almost any part the vast machine required. 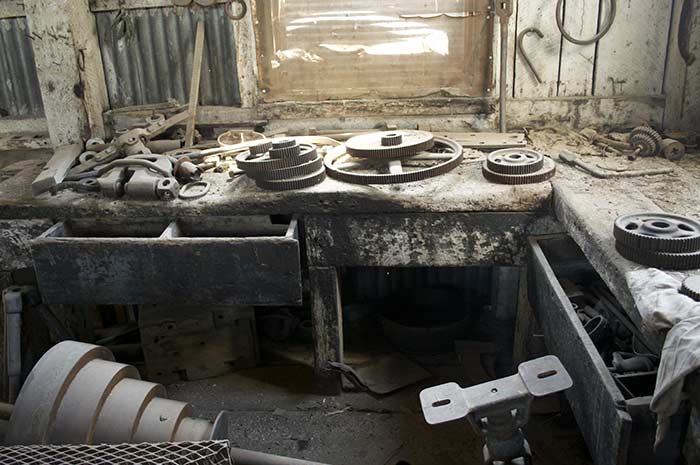 This is all that’s left of the huge electric motor that once ran the place. The Victorians were as pragmatic as they were reckless with the lives and safety of others. The mill had multiple stamps, each of which had multiple hammers. They reasoned that it was cheaper to build one enormous engine to power all that than to make numerous smaller engines to power each hammer individually. That presented a single point of failure, true, but as the saying goes, an airplane with three engines has three times as many engine problems as an airplane with only one. 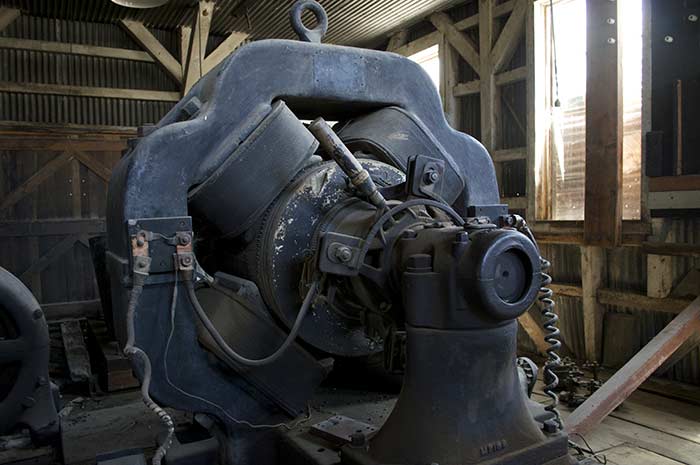 The engine turned this pulley, which fed power to the rest of the mill via the biggest belt you’ve ever seen. It was, according to our guide, this belt that once cut a luckless worker in half. 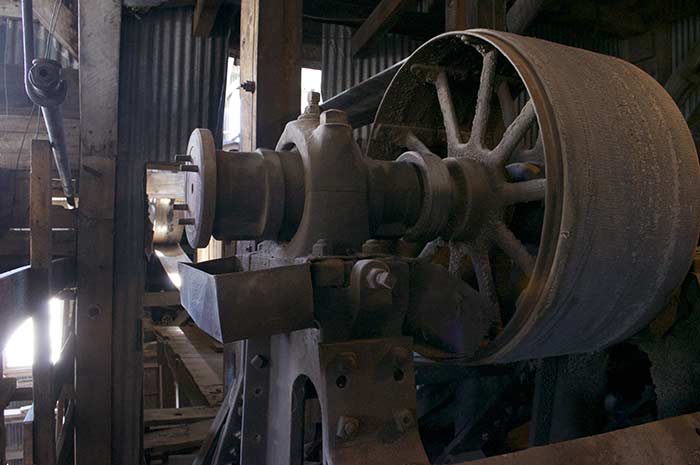 This is the business end, literally, of the stamping mill: the stamps themselves. Each hammer is a ten-foot-long iron rod with a hook on the top end and a several-hundred-pound iron weight at the bottom end. The camshaft spins, lifting and then dropping all the hammers, and crushing everything beneath them into very, very fine dust. 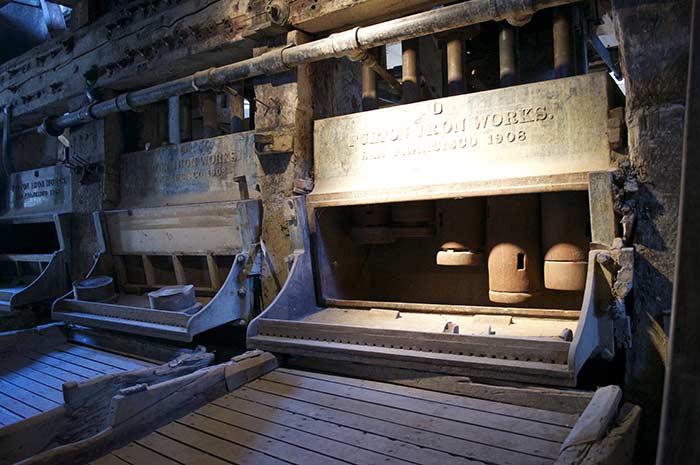 The dust then poured down the slide and onto the pools of mercury. 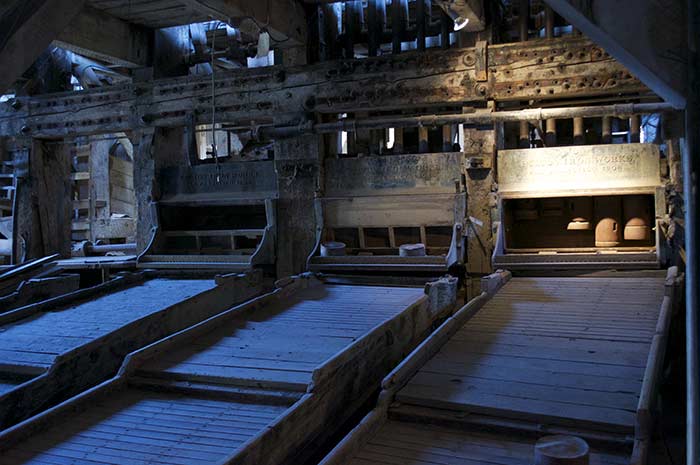 Across from the stamps is yet another workshop, this one equipped with large metal-turning lathes to manufacture oversized parts. I say that is if everything in this entire building wasn’t oversized. We make things smaller and smaller; the Victorians, on the other hand, were size queens. If a part didn’t weigh a ton and a half, it was firmly in the province of jewelers and watchmakers, not machinists. It’s a wonder they could make a pocket watch any smaller than a manhole cover.

Once out of the mill, which even today probably violates a dozen EPA regulations on mercury exposure, we wandered around some more, looking at the old-school mining equipment scattered like weird metal vegetation.

Like this steam-powered elevator that lowered miners into the deep shafts. 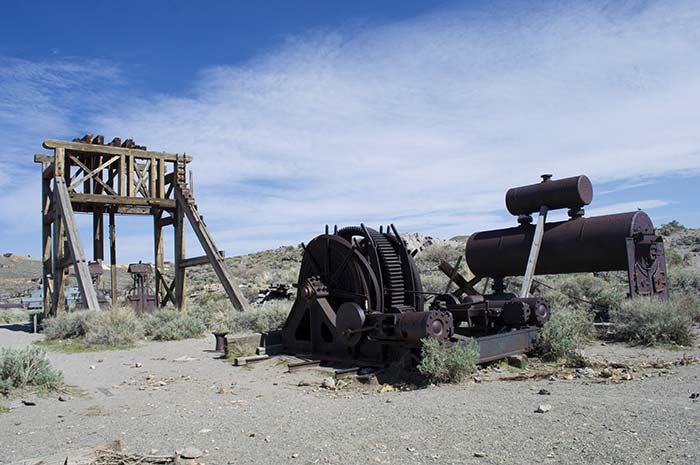 When I say the castoff bits of Victorian tech were everywhere, I mean everywhere. You can’t walk anywhere in Bodie without tripping over, stepping on, or stubbing your toe on it. The Victorians believed the only thing better than iron was more iron. Subtle they were not. 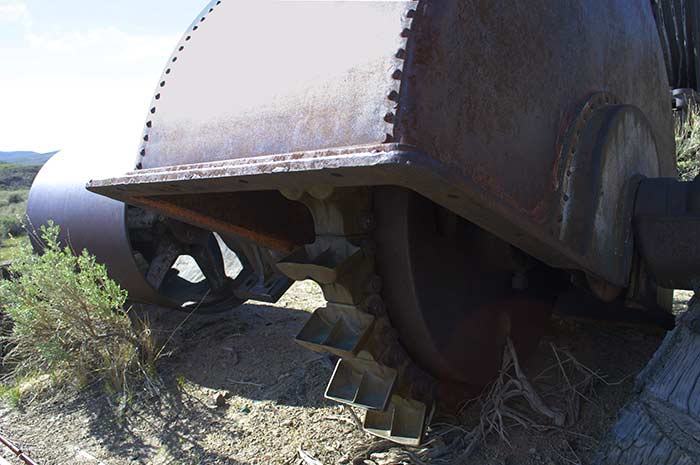 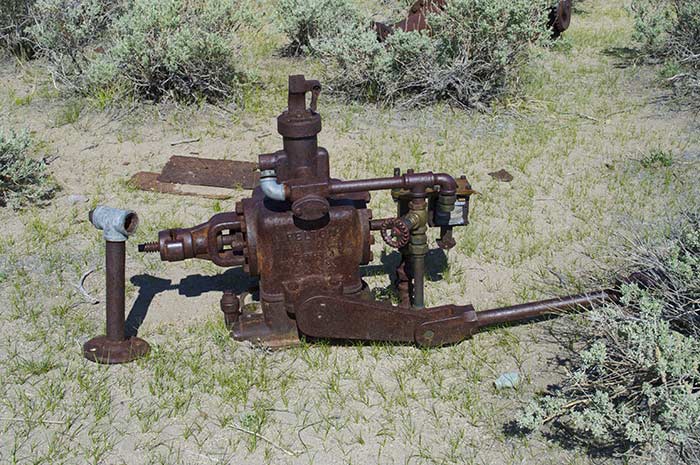 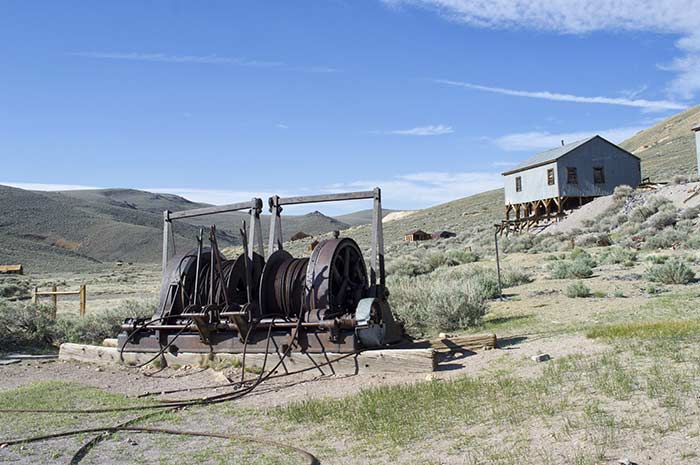 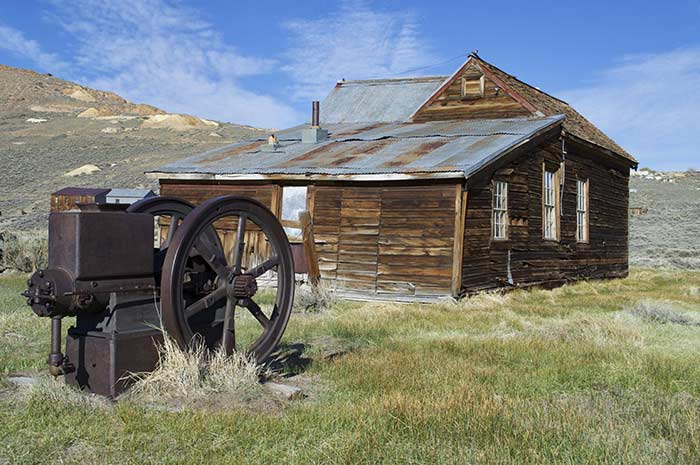 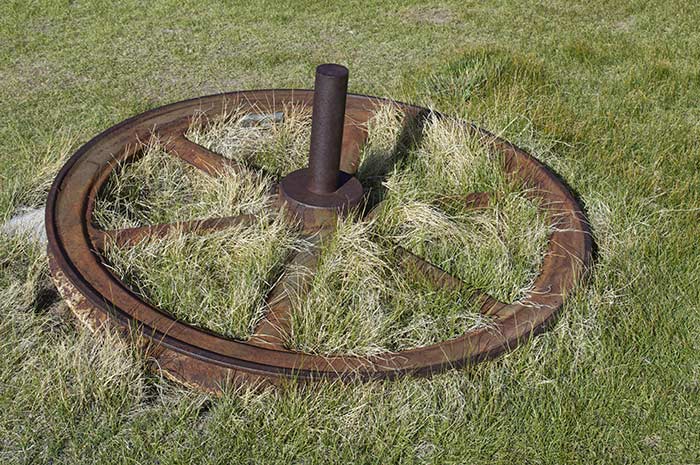 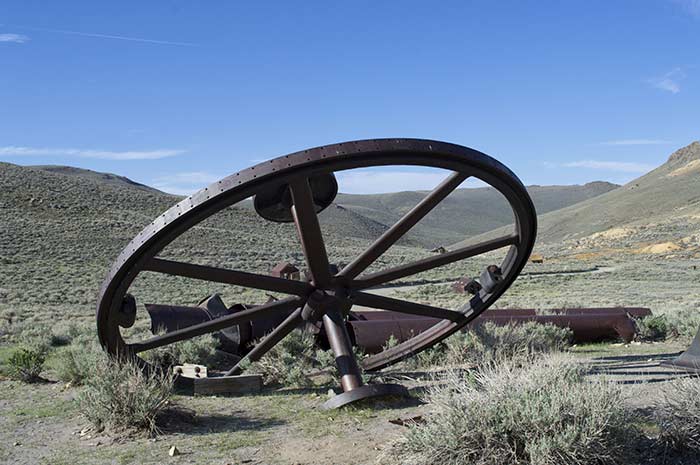 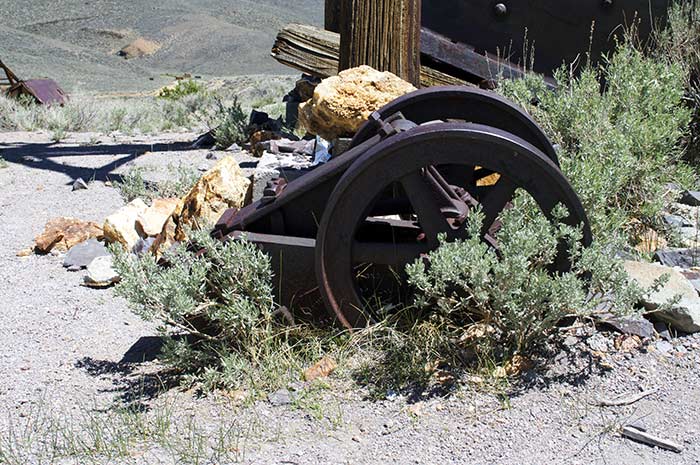 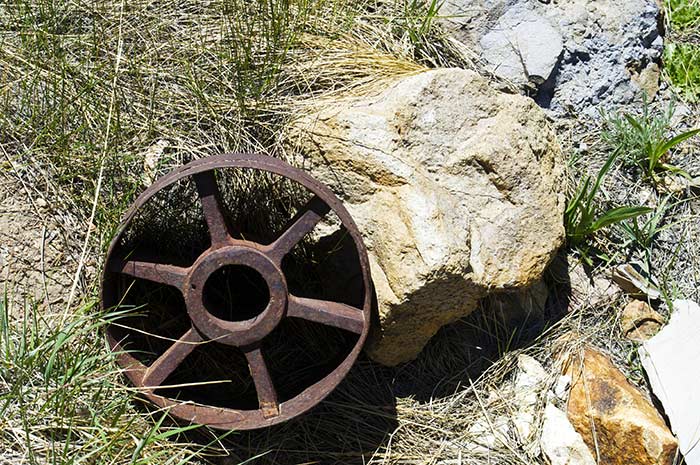 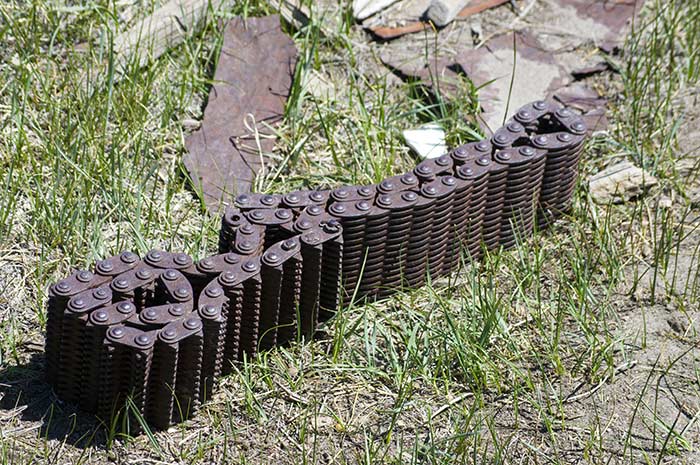 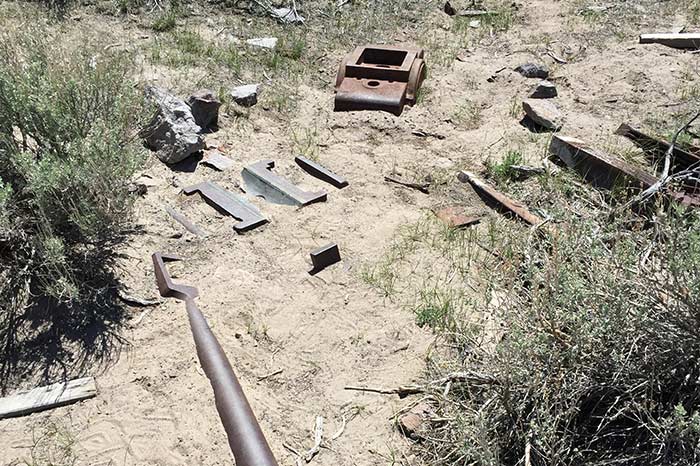 The rod in the foreground of that last photo is one of the tops of the giant hammers from the stamping mill. You can see the hook that engaged the cams in the camshaft that lifted and dropped them. If a particular hammer or stamp needed to be fixed, the worker would take a block of wood, reach in to where the camshaft ran through the top of the stamps, and jam the piece of wood in under the hook to hold that hammer up…because, naturally, they wouldn’t stop the mill just for a paltry thing like service.

Workers lost their fingers doing this. They were fired and given a couple hours to leave.

When we came back out, Bunny and I saw…a bunny. A real, honest-to-God Bodie bunny, right there watching us. 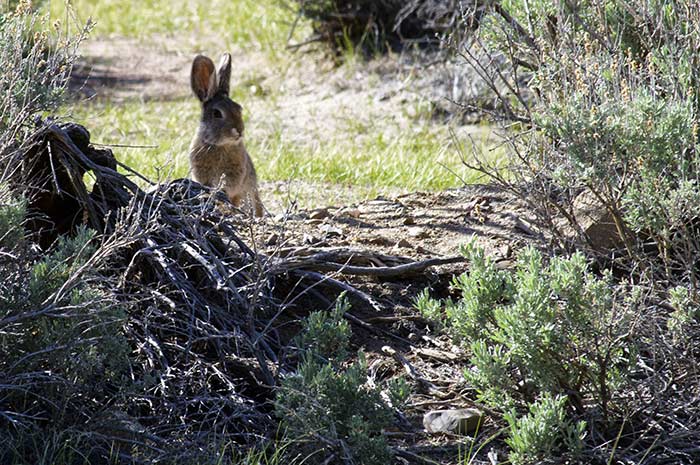