As our journey around the Pacific Northwest unfolded, emanix and I slowly gained an awareness that not all ghost towns are the same. There is, in fact, an entire taxonomic classification of ghost towns–a phylogenic tree, if you will, of abandoned places.

The classic, Scooby Doo variety of ghost town–an entire town whose members have left behind, leaving empty buildings in their wake, is relatively rare. Ghost towns like that don’t usually last very long, unless they’re in high desert. The artifice of human hands is surprisingly fragile and crumbles quickly without human tending. Some of the ghost towns that had formerly be on our list, before we started validating them with Google Earth, are nothing but foundations scattered about in otherwise unremarkable landscape.

Some ghost towns are what Bunny calls “zombie towns.” They’re towns that were mostly or completely dead, then came back to life when the economic conditions changed. One ghost town we had planned to visit but then removed from our list is a classic example, an old mining town settled in the 1800s that became nearly deserted in the 1940s when the mine played out, then saw new life in 2011 when new mining technology made it possible to reopen the mine.

More common are ghost towns that aren’t really ghost towns. People still live in them; there are inhabited houses and ongoing business enterprises set in amongst abandoned houses. The town of Venango, Nebraska where I grew up is a semi-ghost town. Some of these ghost towns reinvent themselves as tourist destinations, playing up the “ghost town” mystique for the benefit of visitors.

Granite is a tourist ghost town. Being there is a bit like being on a very realistic movie set. There are still people living there–quite a few of them, in fact–and many of the abandoned buildings have little signs telling you what they once were.

Granite wasn’t all that impressive at first glance. 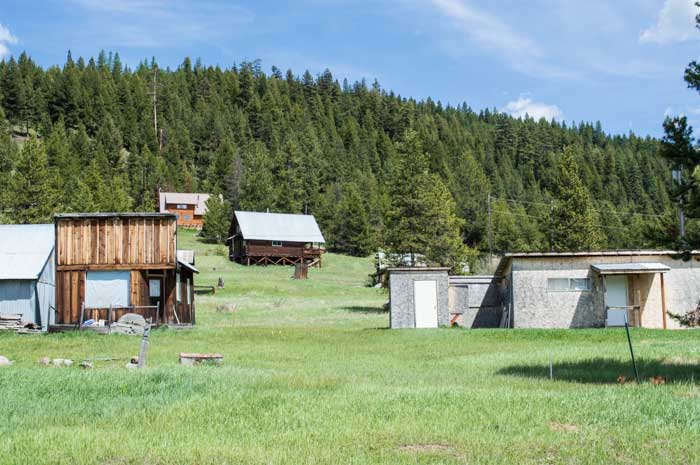 I have often been told not to judge a book by its cover. It’s advice that never made a whole lot of sense to me; if the cover didn’t matter, why not just put a blank cover with the book’s title on the front? Today, as co-owner of a publishing company, it makes even less sense to me. But the idea behind it has a small grain of truth. You can’t always tell from a first glance at something what you’ll get. First impressions can be deceptive. Something that doesn’t seem impressive at first might be far more impressive once you delve a bit deeper.

Sometimes, though, you can judge a book by its cover…and Granite was one such book. We hopped out of the Adventure Van and poked around for a while, waiting to be blown away by something amazing. Amazing things failed to happen.

We did both like this old dance hall, to be fair. 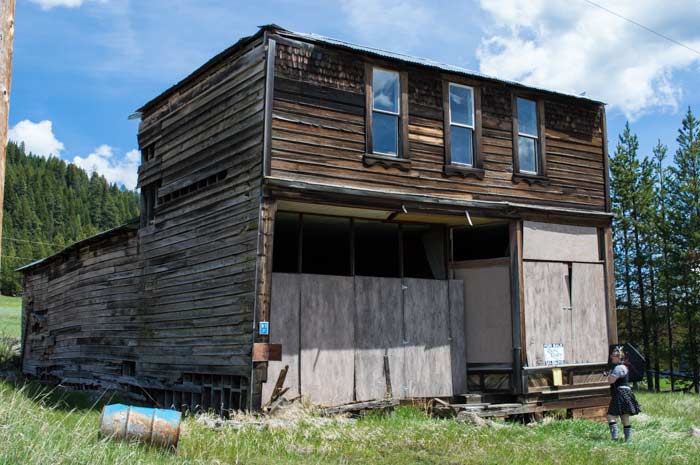 We knew it was a dance hall because a sign told us so. 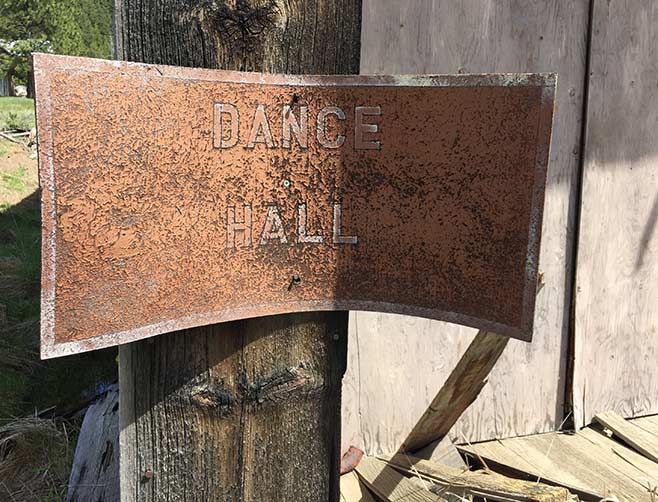 That sign was probably old when mammoths walked the earth. Oh, the stories that sign could tell–skies filled with the leathery wings of great flying pterosaurs, the discovery of the western reaches of the New World by a strange species of hairless ape, Richard Nixon’s Southern Strategy.

The building is for sale, if you want it.

The same style of sign identified the old fire station and the old church. (It’s hard not to put “the old” in front of the remnants of abandoned places–the old Miller place, the old asylum, the old space shuttle Vehicle Assembly Building, the old Detroit.) 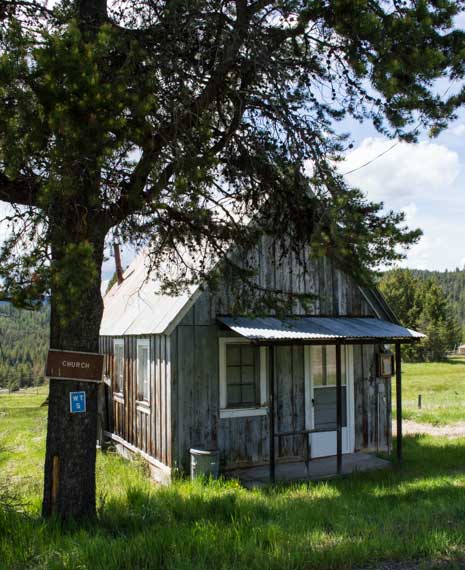 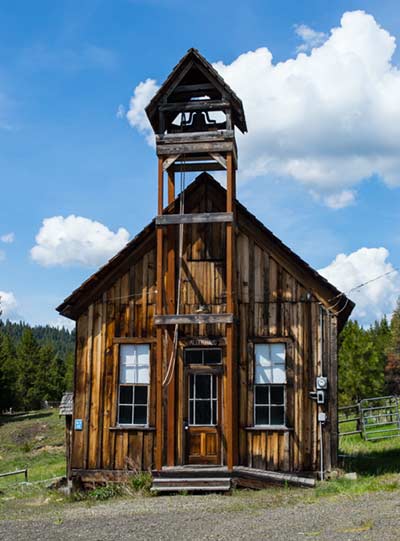 But we soon found ourselves bored and in search of wifi. There was a small combination convenience store/winter sports staging and supply area/restaurant at the edge of town, where we wandered in search of food and Internet access. They had wifi but told us guests weren’t allowed to use it, on account of the considerable expense involved in airlifting data packets to such a remote place.

They also seemed flummoxed by Bunny’s English accent and even more befuddled by her request for tea. It took a while, but they finally sorted out what “tea” was an a loose approximation of how to make it, and delivered, after considerable fussing, a beverage which was more like tea than you might expect from, say, a Sirius Cybernetics Corporation beverage dispenser.

We headed out of town, pausing only long enough to photograph this rather fetching ruin of the old car, located just a short distance from the old lodge right next to the old tree. 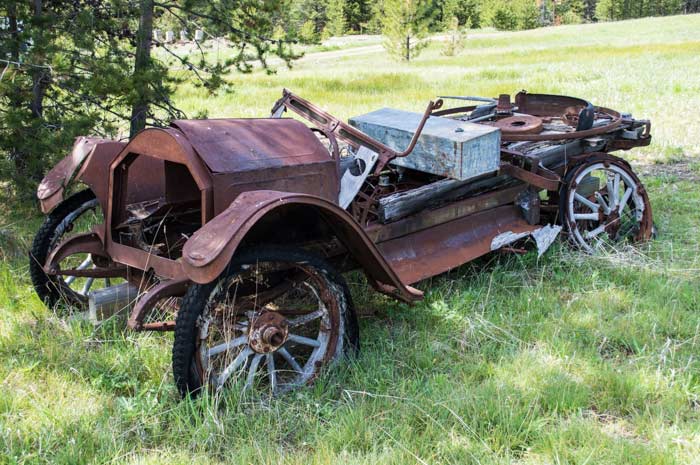 We headed out to our next destination, which we hoped would be less semi-ghost town and more authentic ghost town than Granite, and we–

“That” turned out to be a cluster of ruins–not a town, precisely, but more a gathering, or perhaps clump, of old houses long since abandoned.

And it was awesome.

I stopped the Adventure Van off the road, a narrow and straight strip of highway that cut through the desert like a length of electrical tape placed by some unknown hand over an otherwise innocuous birthday cake, or something.

We hopped out, cameras in hand, and explored. 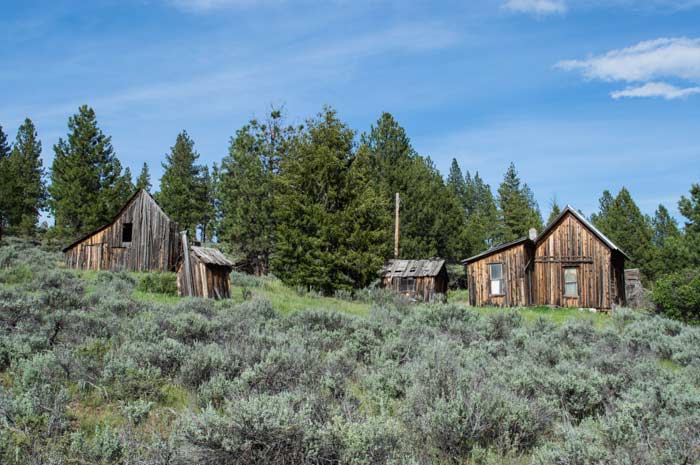 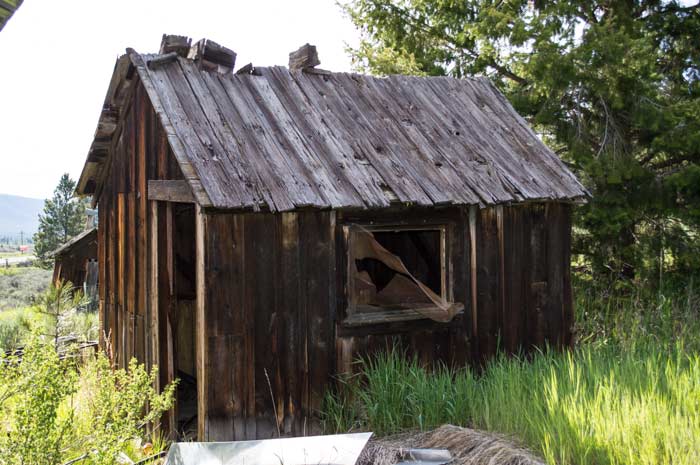 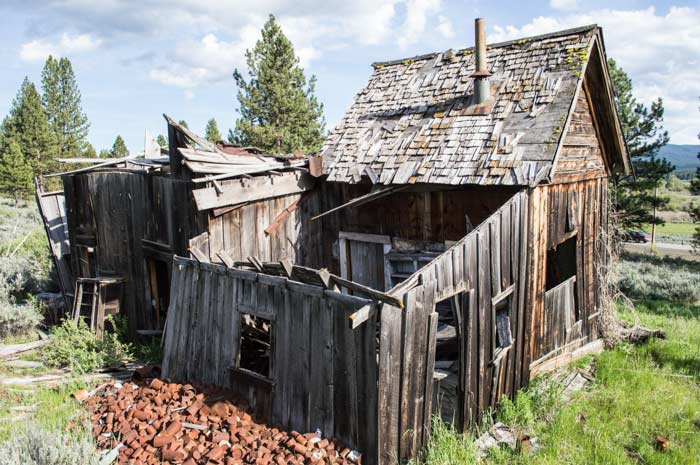 That’s an enormous mound of old tin cans, now rusting, behind that house. 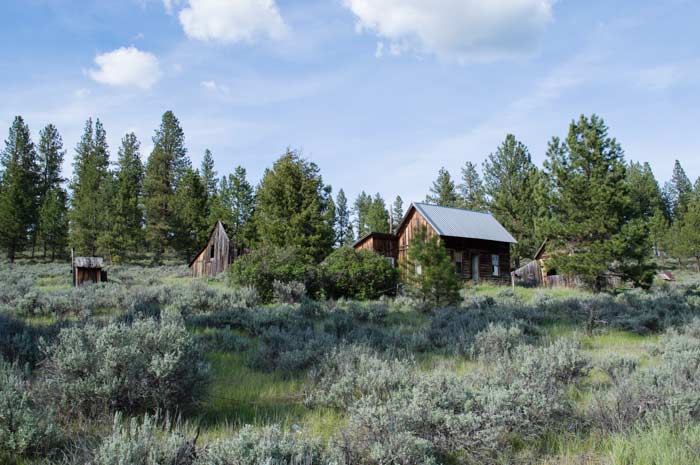 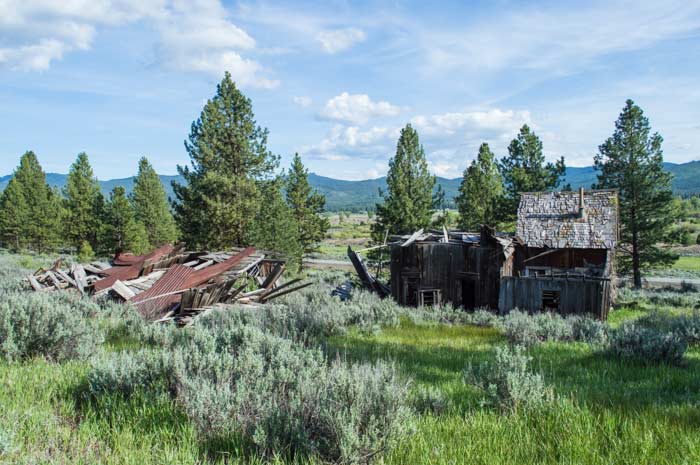 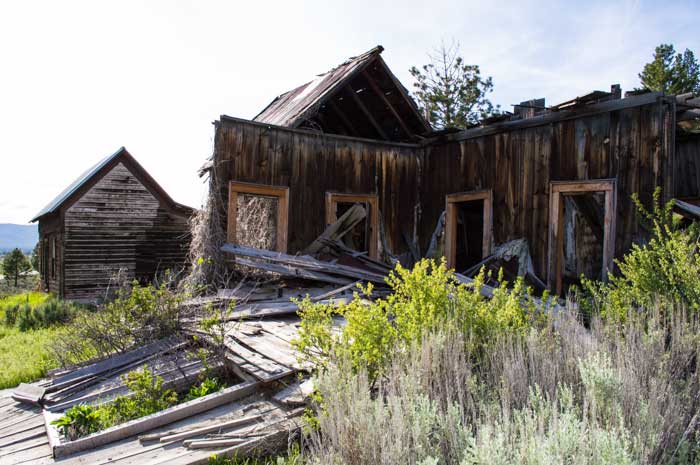 This lovely, lovely old stove was slowly turning to dust beside the collapsed wall of one of the houses. At least I think it’s an old stove. I’m not entirely sure. That’s an old stove, right? 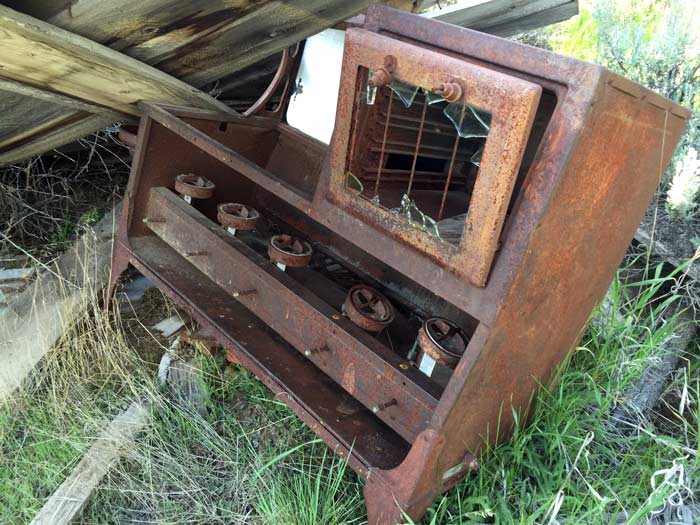 We cautiously poked our noses into one of the houses. The floor was littered with decades of detritus. There were some magazines from the 1940s lying scattered amongst the refuse and rubble. 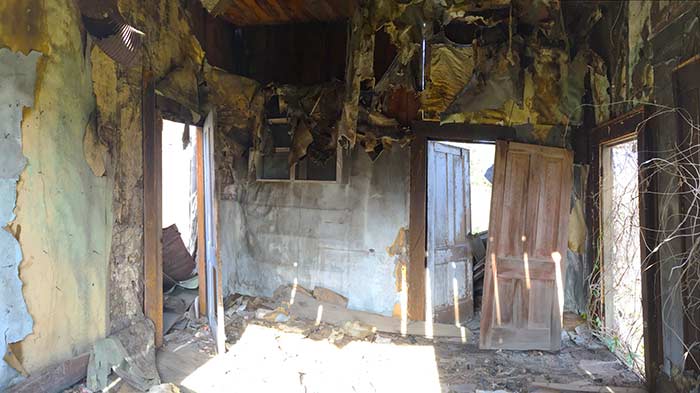 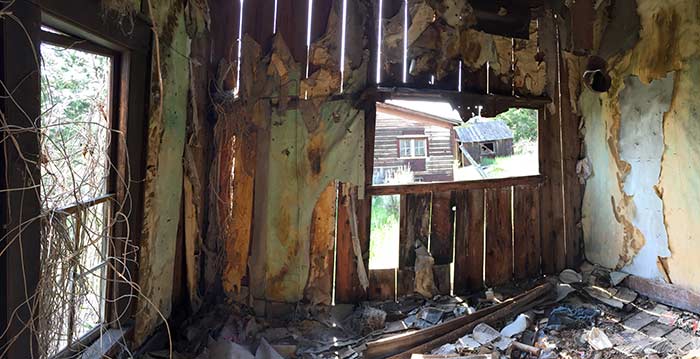 The building next to it was in slightly better repair–but only slightly. 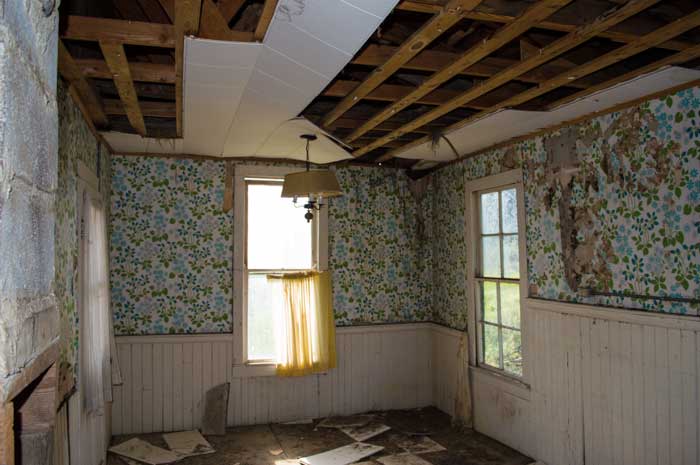 This was our first real jackpot–a completely serendipitous find that was absolutely magnificent in its decay.

We wandered around for a time. Eventually, a car pulled up next to the van. “Hey!” a woman said to Bunny. “I think you’re trespassing.”

“Okay!” Bunny said. That seemed to be enough for her, and she drove away.

I paused to get one last panorama of the scene before we left.

We hopped into the van. I put the transmission in Drive, and approximately two hundred milliseconds later had dropped the front of the van into a ditch.

We got back out. Bunny shook her head.

A car traveling the strip of electrical tape stopped and a lovely young couple got out. “Need a hand?”

I got back in. Bunny and the couple put their backs against the nose of the van. The wheels spun.

I wish I could tell you, gentle reader, what happened next. I feel that I can’t quite properly comprehend it myself. It seemed as if Bunny turned green and…swelled somehow. And roared a mighty roar, a roar to make the heavens tremble and brave men weep. The nose came up out of the ditch and the van lurched backward as though tossed like a Dixie cup in the mighty fist of Hulk Hogan, who was perhaps at a picnic with friends and no longer needed it, having consumed the combination of Kool-Aid and Pabst Blue Ribbon it once contained.

The couple waved cheerfully and drove away. Bunny climbed into the front seat, once again her normal size and color. “I think I popped the clasp on my bra strap,” she said. I stared at her, thankful that time and circumstances have never conspired to cause me to be in a fistfight with her, as she would without question crush me like a bug.

And we were off once again, heading down the electrical tape highway across the great frosted birthday cake of life, destined for more adventures which I shall relate in the next chapter of this tale.

2 thoughts on “Two Chaosbunnies in the Desert: On the taxonomy of ghost towns”