I first went off to college in 1984. (I say “first” because I’ve had a somewhat checkered college career, with many false starts.) On the occasion of my going off to school, to learn (or so I thought) computer engineering, I got myself a programmable calculator: a Radio Shack EC-4004.

I’ve moved rather a lot since then, but somehow, and without any deliberate intention on my part, that calculator seems to have stuck with me…kind of like a cursed ring in an old Dungeons & Dragons game, with less eternal suffering and more calculating definite integrals. (Yes, it could do that.)

I found the calculator a few days back, while I was digging through a drawer looking for a roll of tape. It’s been through a lot; it’s covered with dust, and I have a hazy memory of spilling a shot of apple schnapps on it at some point in the past.

I flicked the power switch, not expecting a lot, and…it worked! The batteries, which have never been replaced and are now old enough to vote and drink alcohol, still worked a treat. 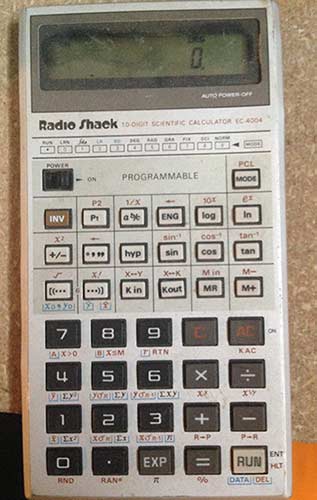 As powerful as modern smartphones and similar devices are, there’s no chance they’ll still work after a similar amount of time. Flash memory is cheap but transient, and loses information over time. Modern lithium ion batteries degrade over time. Leave an iPhone in a drawer for twenty years and it will be a paperweight on the other side.

This old calculator has a paltry amount of processing power compared even to a modern watch, but you gotta admire the way it just keeps going.

2 thoughts on “#WLAMF no. 36: Antique Calculators”