On the plains of New Mexico, there is a road. This road stretches for miles across empty desert. If you drive far enough on this road, eventually after you’ve passed miles of scrubbrush and have begun to imagine that all the people you’ve ever known have never really existed but are only the products of your own hallucinogenic dreams, you will see an enormous radio dish on the horizon. And then another, and another.

You’re not actually close to the Very Large Array yet; there is still a lot of driving ahead of you.

But if you’re up to the challenge, and if you’re patient and persistent, and if you don’t break an axle on the narrow and badly-maintained road, eventually you will come to a place where there are a lot of very smart people who are very dedicated to understanding the physical world. 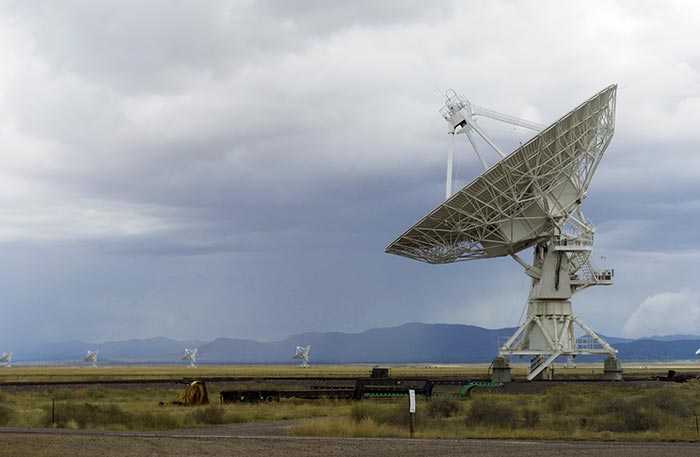 This is the Very Large Array. It is a collection of radio telescopes that looks into the universe in a wide range of frequencies, frequencies our limited vision is altogether insufficient for. Its purpose? To understand the universe we live in. 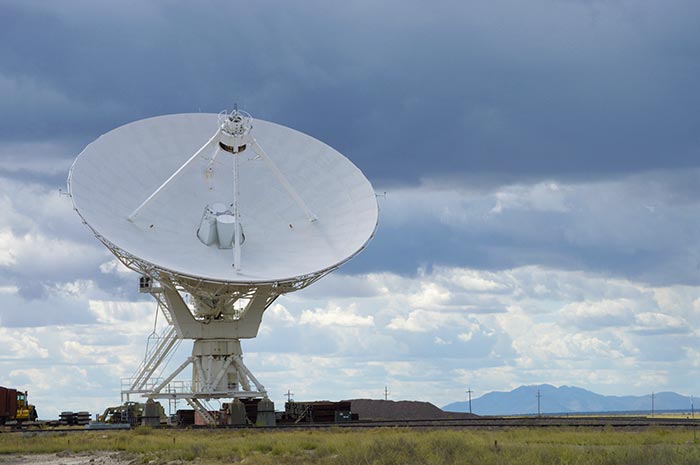 Eve and I stopped here on our trip around the Southwest. She knows someone fortunate enough to work here, and we were invited for a tour.

These dishes can act individually, but usually they’re part of a collective whole, gathering and amplifying incredibly faint signals from very far away places. The entire array is, in a sense, a single instrument, and that instrument can be reconfigured to observe radio waves in all kinds of frequencies.

But the best way to align a set of dishes changes according to the frequenceis they’re observing, and that means these antennas move. I don’t mean they move as in rotate to sweep the sky, though they do do that as well. I mean move as in grow farther from each other or closer to each other, as the observations require.

They are huge, and moving huge things means big machinery. Each antenna sits on a pad, and each pad is next to a set of railroad tracks. Those railroad tracks are the roadways for enormous tenders, which literally pick up the antennas and carry them from place to place.

To save room, the train tracks don’t curve. They intersect at 90-degree angles. To make a turn, the tender sets down an enormous hydraulic ram, lifts itself and the antenna completely off the ground, spins around on its own axis, and settles itself back down on the track again.

We were fortunate enough to be able to climb one of the antennas, for a value of “fortunate enough” that means “allowed to take a harrowing climb up a creaking, swaying steel staircase onto the surface of a tremendous and steeply-angled dish made of surprisingly thin sheet metal that’s way, way higher off the ground than you think it is.” Those afraid of heights, falling, ladders, stairs, or swaying back and forth while a long way from the ground need not apply. 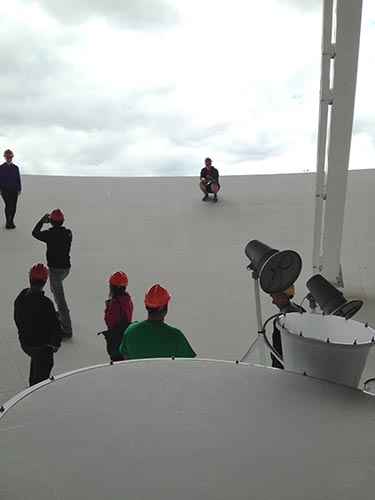 I am not afraid of any of these things, and climbing onto the dish was only a little short of terrifying.

Big Science happens here. This is the sort of place where we as human beings learn more about this world we are so uniquely blessed, for a short time, to exist in. There is no more noble nor essentially human quest than the quest for understanding, and places like this are where that happens.