I was sold a bill of goods.

We all were, really. It was a bill of goods we’d been promised for years, with the reboot of the popular BBC TV show Dr. Who.

I loved Dr. Who as a kid. I had a secondhand television set in my bedroom when we lived in rural Nebraska. We didn’t have cable, and we were way out in the middle of nowhere, so we only got two stations: PBS and something I don’t remember (because if you have PBS, what else do you need?). I’d watch Tom Baker romp around the universe with his sidekick Louise Jameson (my second celebrity crush) in cheesy low-budget glory.

The new Dr. Who promised to be something darker, something more complex, something less campy and more menacing. And, for a time, it delivered.

Oh, sure, it had problems. Russell T. Davies’ epic misogyny was tiresome and sad, like that one relative who overstays his welcome at every family get-together, the loser who drinks too much and starts rambling about how in his day, women didn’t run for political office before he ends up passed out on the table with all the leftovers scattered around him and his head in the plate of mashed potatoes.

Eventually, the show realized it was actually Mr. Davies’ bigotry that looked tired, and Steven Moffatt took over the reins. His sexism is still there, to be sure, though it’s a more covert sexism, a sexism that sees female characters as “strong” provided they don’t, you know, talk too much or stray from gender roles. But that, perhaps, is a topic for another essay.

When you think of the new Dr. Who, what comes to mind? The character of the Doctor has been re-imagined in a much darker way than the original. This is not the Tom Baker Doctor; this is a doctor much more complex, much less cartooney. This is the Doctor who is always running–but not necessarily from Daleks or Cybermen as much as from himself. This is the Oncoming Storm, the Doctor capable of atrocity, the Doctor who disowned his own name after he destroyed his entire species. This is the Doctor driven by remorse, grief, and a vast, aching ocean of loneliness. This is a Doctor at war with himself.

That’s what the new series offered, and, for the first several years, delivered. In the re-imagined Dr. Who, we were introduced to a character made up of equal parts whimsey and rage, hope and regret. This was a Doctor of contradiction, a Doctor capable on the one hand of rejoicing “Just this once, everybody lives!” and on the other of inflicting infinite punishment on those who anger him. “He never raised his voice. That was the worst thing, the fury of the Time Lord… And then we discovered why.” This is a Doctor capable of acts of almost inconceivable fury. This is a Doctor who, while deriding genocide, is altogether comfortable with it.

Where did this psychological complexity come from? According to Steven Moffat, from his own past, from his own decision some countless number of centuries ago to destroy his own kind and the Daleks in order to prevent their war from swallowing up everyone else. He looked into the Abyss, and he chose atrocity. He made the choice, consciously and with awareness of the outcome, to commit genocide. Living with the consequence of that choice has defined his character since.

This is the grownup Doctor, the Doctor for adults. The Destroyer of Worlds, the Oncoming Storm, the Bringer of Darkness, with a goofy grin and a Fez and an irrepressible sense of optimism that flies in the face of everything he’s seen. This is the new Doctor.

Or so we were told.

Many heroes have darkness in their pasts. It’s a rather pedestrian storytelling technique. The most simplistic versions of it, repeated in nearly every comic book since the dawn of time, involves a traumatic event inflicted on the protagonist by an outside party, which becomes the protagonist’s reason to become a hero. Spider-Man and Bruce Wayne had people close to them murdered by bad guys. It’s a cheap trick, a quick way to jump-start a hero without having to work too hard.

Sometimes, storytellers will go a more ambitious route, and make the Dark Tragedy that compels the protagonist forward an atrocity of the character’s own making. This is the strategy employed in my all-time favorite novel, Use of Weapons. When it succeeds, it succeeds well.

It’s a difficult thing to do, though. Presenting a character the audience is expected to see as sympathetic and to be able to identify with, and who is also capable of acts of atrocity the audience finds repugnant, requires considerable finesse in the craft of storytelling.

There’s a problem that one faces, when one is a storyteller dealing with a protagonist who, we are told, is capable of atrocity. At some point, we, the audience, must see the atrocity, or else it becomes a gimmick. If we are told the protagonist is capable of this repugnant thing, but we are never shown it, it’s simply another cheap trick, too easily ignored. Eventually, the TV show was going to have to come to a point where we, the audience, would have to be taken to the abyss. We were going to have to see the act, if we were to continue to take it seriously.

That moment came in a Dr. Who show called The Day of the Doctor, and Steven Moffat almost–almost–pulled it off.

The Day of the Doctor could have been one of the best hours of television filmed in a long time. Instead, it made me utterly abandon any interest in continuing to watch the show, and totally undermined any confidence I have in Moffat’s ability to tell a story.

It should have worked. It really should have. I mean, for Chrissakes, they got John Hurt to play the zeroth Doctor, the Doctor whose act of atrocity laid the groundwork for everything that came after. 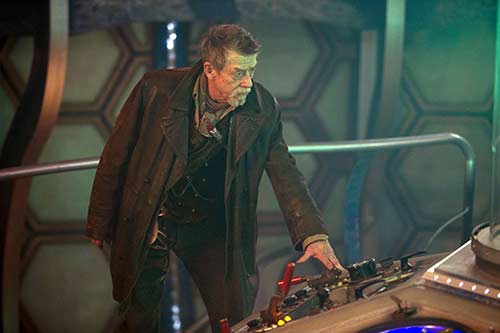 Dr. Who has always been a corny show, with the degree of corniness waxing and waning as different writers tried their hand at the character. (The Titanic ramming through the TARDIS walls in one particularly atrocious and best-forgotten episode, for instance, will not exactly ring down through the ages as television’s highest moment of artistic achievement.) There is, naturally, a bit of corniness in The Day of the Doctor,, and the episodes leading up to it. That’s to be expected. It’s the characters and not the situations that matter most, right?

So we are introduced to the War Doctor, the Doctor before he renounced his name, the Doctor who was the person all the other Doctors would spend their lives running away from, the Doctor who made an unthinkable choice for which he and all his future incarnations would be driven by remorse. We saw, by the device of time-travel and simultaneous presence, the revulsion and contempt his future selves hold for him. We saw, starkly, the Doctor’s self-loathing put on display. We, the audience, were walked through the events that led to this unthinkable choice, the anguish, the despair, the cold moral calculus that justified it and the emotional response to what it implied. We saw all that.

And then, we saw those future Doctors, the ones who had spent centuries running from that choice, the ones who held the man who made them in such contempt, join him at that hour. Wait, the later versions said. You were the Doctor on the day it wasn’t possible to get it right. But this time, you don’t have to do it alone. The past Doctor and the future Doctors, reaffirming that this act was the right–the only–thing to do.

This was a gutsy, brilliant piece of storytelling. This was the storyteller leading us to the edge of the Abyss and saying, see, this character you love, he is capable of atrocity, and he would do it again. This was the Doctor saying, all these centuries I have lived with this guilt and this remorse and this shame and this self-loathing, and I would do it again. From here, from the vantage point of all these centuries, with all that has happened, it was still the right thing to do. This was the twin irreconcilable pillars of the character’s psychology, the essential paradox of his makeup, the Doctor’s compassion and the Doctor’s capacity for genocide, reconciled. This, maybe, was the beginning of the Doctor’s coming to terms with himself, the path away from self-loathing and grief.

But he’s the Doctor! Everybody loves the Doctor! He wears a fez! He’s nice to puppies! He helps little old ladies cross the street! We can’t show the Doctor doing this!

And so, in a ridiculous last-minute deus ex bigger-on-the-inside-machina, he blinked. No, we won’t make him do this! We will paint ourselves out of the corner we’ve painted ourselves into because…the TARDIS is magic! Alternate dimensions! But we won’t actually change the Doctor’s character because…because, um…time loop! Memories! He’ll still believe he did this terrible thing even though he didn’t! Nobody actually has to make hard choices, not for real! Retcon! Retcon!

I can forgive a lot of things.

I can forgive uneven writing. I can forgive lapses in continuity (“Even a Time Lord’s body can be dangerous, so we have to burn it…no, wait, Time Lords don’t leave behind bodies when they die, they leave a special effect instead!”) I can pretend that episode about the Titanic didn’t happen.

But I can’t forgive cowardice.

What happened in The Day of the Doctor was cowardice. It was a storyteller making a promise he didn’t have the guts to deliver on. It was not crediting us, the audience, enough to believe that we could take you seriously about the genocide thing and still want to keep traveling with this character. It was the easy way out–I promised you this…oh, no, only kidding! The Doctor would not really do that. Not for serious.

I can’t forgive cowardice, and the television show no longer interests me in the slightest. I simply don’t care enough to follow it any more.

We were sold a bill of goods. The box is empty. The Emperor has no clothes. Steven Moffat can keep his robotic bad guys with their plunger arms and little flashy lights. I want stories that aren’t afraid to go where they promise. Now, where’s that Culture book?

2 thoughts on “Staring Into the Abyss and Blinking: Why I’m Not Watching Dr. Who”