If you’ve been reading my blog for any length of time, you’ll know I hold very little in common with the Religious Right. I do not, for example, believe that homosexuality is a sin, or that Teh Gayz are all destined for the fires of Hell. I don’t much cotton to the notion that the government of the United States should be replaced with a Christian theocracy. Nor do I believe there is a hidden secret agenda of the Godless to drive this great nation into the ground–I think the anti-intellectualism displayed by so many on the Right is doing that job well enough, thanks.

But there is one thing I admire about the Right, and that is their fearsome, epic ability to frame discussion about any topic they care about by crafting a point and then keeping tenaciously, ferociously on point.

One of the ways the Right has been brilliantly successful at framing the public discourse is in the way they’ve controlled how we think about women. And by “we” I don’t mean “people on the right,” I mean everyone.

Even folks who ought to know better.

The areas of the Internet I frequent are not areas where the Right often appear. I tend to spend my time online in forums that talk about non-traditional relationships, progressive social issues, technical and scientific subjects, and skepticism.

And there’s something really striking about all these places. The Right may not be present there, but the ideas of the Right are. Even, interestingly, in people who claim to despise the Right.

Find yourself a progressive, generally respectful, tolerant, otherwise with-it person. Man or woman, it doesn’t make much difference. Just find someone who thinks there’s room for a multiplicity of views in the public ideosphere. Someone who, if he or she is religious, doesn’t think God commands converting the heathens at the point of a sword. Someone who thinks that people ought generally to be treated well,and that religion isn’t the basis for the formation of a Western representative government. Someone who will agree that racism is a bad thing, even if it’s not entirely clear what we should do to get rid of it.

Now ask that person a simple question: “What is feminism?”

See that? Something very strange happens. For a brief moment, when that otherwise progressive, generally agreeable person starts talking, it’s as if Rush Limbaugh or Sean Hannity stuck his hand up your interlocutor’s ass and made his or her lips move. For that brief instant, that person, that otherwise agreeable and not at all racist or sexist person, becomes a meat puppet for Mr. Limbaugh, Mr. Hannity, and his ilk.

Even if that person would be horrified at the thought of listening to their shows.

Think about what goes through your mind, dear reader, at the word “feminist.” Do you think “shrill”? “Strident”? “Misandrist”? “Humorless”? “Man-hater”? “Feminazi”? Does an image pop into your head of a woman who wants to get ahead by tearing down men, a woman who blames men for her own shortcomings, a woman who wants to cause trouble because she can’t succeed on her own? Do you picture someone who, even if she perhaps has the right intentions, has totally gone overboard, accusing all men of being sexist (or worse, of being rapists)? 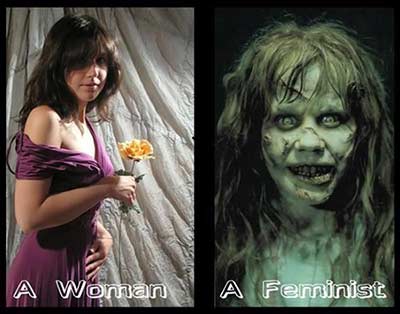 Guess where those ideas come from? I’ll give you a hint: Not from actual feminists.

Now, don’t get me wrong: any sufficiently large group of people is going to contain extremists, bad apples, and destructive folks. If you look at doctors in general, you’ll find the occasional cynical lying fraud like Andrew Wakefield–but we don’t say all doctors are frauds who deliberately publish articles they know to be fabricated. There are probably a small number of extremists out there somewhere who hold something that might reasonably be within spitting distance of some of the stereotypes about feminism.

But the idea that this is what most or all feminism is about? Sheer, brilliant, amazing PR by the Right. Where did you get those ideas? You got them from the Right, even if you don’t know it.

You probably think you didn’t get them “from” everywhere. You simply know them to be true. Everyone knows them to be true, right? And that’s the crux of the brilliance: if you repeat an idea often enough, everyone, even folks who ideologically despise you, will come to accept it as just true.

Feminists hate men. Everyone knows it. Because we’ve all heard it, even if we don’t exactly remember where we’ve heard it from.

Are there women who are angry? Oh, yeah, you bet. What’s amazing is not that women are angry, but that more women aren’t more angry. All the dudebros I’ve personally met get a whole lot angrier about things a whole lot more trivial–for instance, the notion that they shouldn’t grope those hot somethingsomethings at that con without, you know, asking them first. (Scientist Hope Jahren actually had a colleague ejaculate in an envelope and leave it in her mailbox when she dared to think that she might be worthy of a spot on a serious scientific research team…and this isn’t even an isolated or extreme example of the kind of shit women deal with every day. And men say women are angry? Seriously, what would we say about women if they thought it was appropriate to protest the presence of a man on a research team by shoving a used tampon into a mailbox? Seriously, it amazes me that every woman on earth does not, at some point, climb a clock tower with a rifle. I guaranfuckingtee you that if the roles of men and women were reversed tomorrow, we’d see a whole lot of dudebros doing exactly that.)

The idea that feminism means hating men has been so skillfully inserted into the public discourse that it’s accepted as a premise in almost any dialog about men and women. And it’s a corrosive idea. It distorts conversation. If you accept this premise, a whole lot of things that would otherwise seem unreasonable–indeed, even offensive–start to sound reasonable.

It’s the idea that men and women are both people, equally deserving of agency. That’s it. That’s the whole package.

What separates feminism from humanism, then? Centuries of institutional, systematic inequality, that’s what. Saying “I think men and women are equal” is all fine and dandy, but if you ignore the fact that we live under a system that treats, in a thousand ways, men and women as decidedly unequal, congratulations! You’ve just won a Nobel Prize in Missing The Point, which you will be sharing with approximately two and a half billion other luminaries in point-missing.

If you think women are people, congratulations, you’re a feminist! And if you don’t, well…the alternative, it seems to me, is “asshole.”

If you reject this notion of feminism, because everyone knows it means something else, ask yourself: How do you know? Do you know from actually talking to women, or because you’ve heard of this one person who said this feminist this one time said all men are rapists and should die? And if it’s the latter, ask yourself…how did he know that? And more to the point, who benefits from this particular notion of feminism? (I’ll give you a hint, bro: it ain’t women.)

End note: At this point, I know, I just know, that some of you have fingers already all a-tingle to send me a private email telling me pretending to be a feminist is a great strategt for getting laid. Seriously, don’t bother.