I didn’t expect the elephants.

The day with figmentj was quite lovely, featuring strolls through Boston Commons and antique naval mines and Christian hair metal and frightening clocks with plastic women in chains and all manner of other parts of the general Boston experience. We ended it by watching the sun set over the river by Harvard square, the peaceful tranquility of the flame-touched sky broken only by the screams of the boating-slaves rowing along the river under the gentle exhortation of scourge and lash: 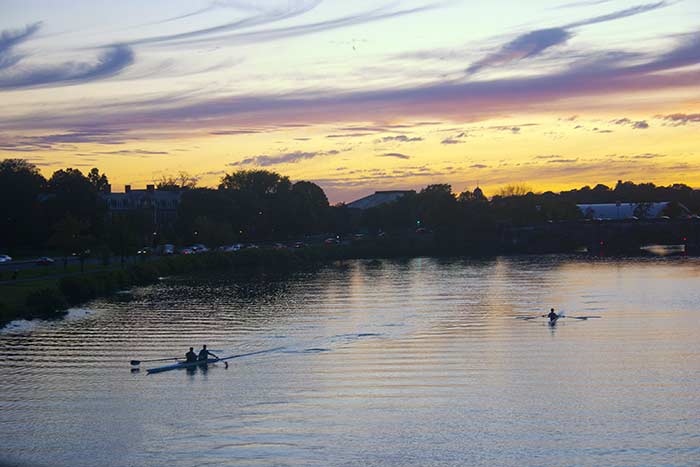 But all such things must come to an end. Eventually, it was time to head back to Claire’s to help her get settled in to her new digs with all her various and sundry possessions, including her rather fetching Viking helmet, before sailing through the air in a magic metal tube back to Portland.

The next morning, Claire had to be on campus early for a meeting of some sort or another, where her indoctrination into the ways of life at Tufts University would begin. I had resolved to seize the morning and make the best possible use of it by remaining asleep while she got up to head to campus. I had resolved to head there myself, at a much more reasonable hour, as I am generally a much more reasonable man than those who profane the early hours with wakefulness, and to meet Claire there when her indoctrination session had concluded.

I didn’t, as I have mentioned, expect the elephants.

Tufts University is not, by the strictest definition, a clown college. Indeed, it excels in the pursuit of many intellectual endeavors unrelated to clowns. Its history, however, is tightly woven with that of the clown, as one of its earliest benefactors (and a source of much if its early funding) was none other than Pt. T. Barnum of “There’s a sucker born every minute” fame. He made his considerable living, though presumably not his endowments, on the back of that maxim.

In 1889, Barnum, when asked by the university’s trustees what he could do to help support the institution in a time of great need, donated the stuffed and mounted hide of one of his most beloved circus animals, Jumbo the Elephant, to the school. There is a parallel to this take in the Islamic story of the archangel Gabriel, who gifted the patriarch Abraham with an enormous stone called the Caaba which later became the object toward which Muslims now bow when they pray, when (as Ambrose Bierce observed) the patriarch had perhaps asked for a loaf of bread.

Just as the Caaba has exerted a magnetic influence on the Islamic tradition ever since, so has Jumbo the elephant had a similar effect on Tufts University, which might have taken its name from the small tuft of coarse fur that adorns the end of an elephant’s tail. The stuffed and mounted elephant was subsequently destroyed in a fire, or so the legend goes, and every bit of it was lost except for the tuft at the end of the tail. The symbolic meaning of this will be left as an exercise to the reader.

I discovered a strange building during my exploration of the university grounds: a vast building, filled with miles and miles of shelves, along which were stored bound volumes of printed pages. It was kind of like an iPad, if you took all the books in it and, for some reason, printed them out. Prominent in that building was this picture of the Elephant Rampant, trumpeting its victory cry after seeing its enemies scattered before it like leaves in the wind, their broken bodies staining the ground red with their blood and the tears of the widows: 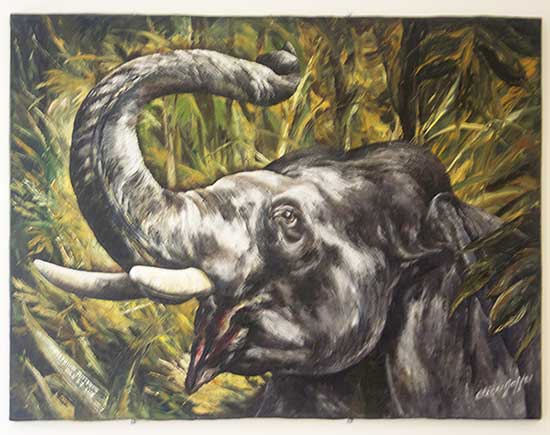 I also witnessed this man, perhaps convicted of some terrible crime, fleeing the Hall of Justice with its symbolic sculpture of an elephant triumphant as its keystone, ahead of the swift and brutal Justicars who will in a few minutes’ time come from these very same doors to run him down, for the education and amusement of the rest of the campus: 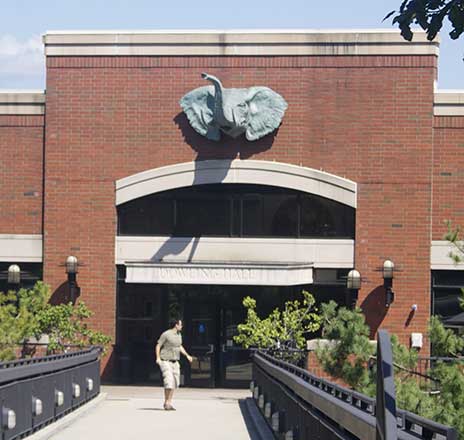 The position of the Justicars in the annals of Tufts history is long and interesting. The universally has a long-standing rivalry with its ancient enemy, Bowdoin College in Maine. This rivalry in times long past was fought at a low level, with skirmishers from each college occasionally leaving the walls and fences of their respective universities to stage raids on their adversary’s stronghold under cover of night.

However, in the black days of May in 1897, a large and powerful force ventured from Bowdoin on the path of war. They arrived in the afternoon of May 23rd, and the three days that followed are too grim for the telling. In the aftermath, the Tufts ruling council created an elite group of warriors, the Justicars, whose elephant-shaped masks of cold iron and moon-forged silver soon struck fear into the hearts of all who stood against the university.

Today, the battles between Tufts and Bowdoin are fought in ritual combat on the fields of the gladiators, and the Justicars serve a different function.

Down the hill a bit, one can find these sculptures, erected as reminders of the ever-watchful vigilance and benevolent care of the Great Pachyderm: 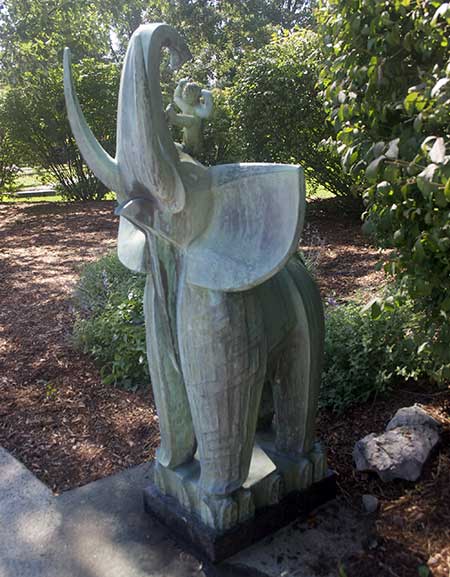 And further down still, near the university’s main temple, the idol of the Great Jumbo stands proudly. Offerings of the people adorn his side, written in the secret ancient script.

My journey to the Tufts campus was not without some small difficulties. Claire’s new home is located a short walk from the grounds. I am not, as those of you who have read some of my previous adventures, gifted with a good sense of direction, or even a sense of direction at all. It is only through conscientious memorization of routes and landmarks that I can find my way from the kitchen to the bedroom.

So I will confess a measure of consternation with the prospect of finding my way unaided from her new home to the university. Fortunately, through an accident of geography, Tufts University is located at the pinnacle of the only hill in the neighborhood. “Keep going up,” she said. “As long as you’re going up, you can’t miss it.”

Her advice was outstanding. With the mountain itself as my guide, I am pleased to report, Gentle Readers, that I became lost only twice, and did not walk more than half a mile out of my way.

Close to the edge of the campus, one finds this sprawling mansion, the home of the President of the University.

The low hedge you see ringing the house’s grounds are all that remain of the high, impregnable walls that once stood on that very spot, erected in haste after the attempted coup of 1979.

In that year, the grad students, who spend long and dangerous days in the eternal darkness of the mines beneath the campus, working day and night with pickaxe and shovel mining nuggets of knowledge in dangerous conditions for little pay, and whose labors made the university’s High Council and its president rich beyond dreams of avarice, rebelled. They seized the entrance to the mines and lay siege to the residence of the President himself before the rebellion was crushed.

Today, the relationship between the ruling class and the university’s laborers is much less tense. The laborers have negotiated contracts with the ruling elite that grant them some small measure of hope of upward social mobility, while the elite have largely been able to retain their fabulous wealth and their odalisques, who calm the fears of the aristocracy with the gentle applications of the feminine arts.

It was in bemused reflection of those arts that Claire later found me, wandering the campus without purpose or goal. We dined upon local delicacies called “burritos” and “quesadillas” that afternoon, before returning to her new home to engage in the rearrangement of things and stuff into a more suitable configuration.

The next day found us once more in her car, the vehicle whose stalwart service had seen us across an entire continent, through deep canyons and soaring mountains, past strange landscapes teeming with Mormons and the Guatemalans who’d carried off one of our own, this time on a shorter journey to the airport.

I have flown, through strange happenstance of fate and circumstance, many times in the past couple of years. Each time, I have flown on Delta Air Lines, and each time, my luggage has come out somewhat the worse for the wear. On my trip back from Europe, documented many posts ago, the handle was broken–somewhere, if I recall correctly, between Amsterdam and London. On this trip, I arrived in Portland to find a large gash ripped in the front of the suitcase.

It was not until my next journey, to London and King’s Lynn for a debauched celebration of birthday hedonism, that my faithful suitcase would receive a terminal blow. That is a story for another time.