A couple of weeks ago, before I travelled to the UK, I was home watching old episodes of the TV show Bones on Netflix. If you’ve never seen the show, it’s about a beautiful forensic anthropologist with an inability to relate to other people’s emotional state that’s as tenuous as a BitTorrenter’s understanding of intellectual property, a dashing FBI agent who has a startling lack of ability to think outside the box, and the wacky hijinks that ensue in the world of forensic science because each is too cowardly to admit that they fancy the other.

One particular episode I watched centered around a group dedicated to the idea of “radical honesty.” As might be expcted from a mainstream television show written for a mass audience by generally competent but not particulalry brilliant writers, the show’s main characters spent some time debating the merits of complete honesty in interpersonal relationships, and wacky hijinks ensued. In the end, cultural norms were validated, the easiest answer was reached, the bad guy was arrested, and everyone was happy.

Something left me flat about the episode, and after processing it for a while, I figured out what it was. Any discussion about radical honesty invariably ends up getting framed as a question about whether or not being honest all the time is good, and that is a terrible way to look at the question.

It has been my experience that people dedicated to the Radical Honesty™ movement tend to be, not to put too fine a point on it, rather horrible people. Now, I’m sure there are absolutely lovely, smart, compassionate folks who are part of the whole Radical Honesty thing…but I have yet to meet any.

The folks I have met to advocate Radical Honesty™ tend to fetishize blunt, unvarnished, raw communication, at the expense of compassion or of any sort of concern for the emotional response of the people to whom they are speaking. Like the main character in Bones, they tend to display a lack of empathy toward their fellow human beings that, from the outside, borders on active hostility.

And that’s unfortunate, because it means that conversations about Radical Honesty almost always end up being framed in terms of “Is honesty good, or do we need little white lies and other small deceptions in order to make civilization go?” The debate gets set in terms of honesty vs. dishonesty, and that’s a damn shame.

To me, it seems self-evidently obvious that honesty in one’s romantic affairs is not just the best policy, it’s the only policy that’s likely to lead to healthy, secure relationships. Debating the relative merits of honest relationships is, to me, as pointless as debating whether “round” is a good general shape for a wheel.

I advocate, absolutely and without reservation, for honesty in relationships. That would, at first blush, seem to put me square in the same camp as the Radical Honesty™ folks…and I still can’t abide them.

To understand why, one need only consider the question “Does my butt look big in this?” 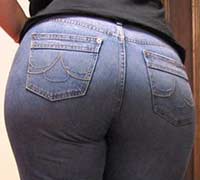 It is a fact of the human condition, as sure and immutable as the fact that night follows day: Whenever anyone discusses the idea of honesty in a relationship, at some point the conversation will turn to “Does my butt look big in this?”

Those who advocate for dishonesty will say that the easy, comforting answer, the flattering lie, is best. The Radical Honesty™ crowd will say that telling the truth gives the other person the opportunity to learn the valuable life skill of Not Taking Things Personally…and besides, you’re not responsible for someone else’s emotional state anyway.

And they’re both wrong.

The question “Does my butt look big in this?” is almost never about the clothing in question or the butt in question. (I won’t say it’s never about that; the speaker might be getting ready for a job interview or a date or something, and looking for advice on the most flattering outfit to wear. But that’s very situational.) Instead, the question is almost always about something else–a passive way to fish for compliments or validation, an expression of body-image insecurity, something like that.

The white lie–“Yes, dear, your butt looks magnificent!” if it doesn’t–does little to address the real issue. And the person asking the question is unlikely to believe the answer, anyway.

But the Radical Honesty™ answer is no better; in fact, it’s worse. “Your butt looks big no matter what you wear” also does nothing to address the real issue, but on top of that it’s pointlessly, needlessly cruel.

It is possible to be honest without being cruel. That’s the part the advocates of Radical Honesty™ rarely get right. “I like your butt better in the polka-dotted skirt” might be an honest answer. “I love you dearly; there’s no reason to worry about your butt, because that’s nothing to do with the reasons I love you” is another.

Honesty without compassion is rubbish. The question should not be framed as “Which is better, honesty or dishonesty?” but rather “How can we strive for absolute honesty in a framework of respect, compassion, kindness, and sincerity?” All too often, when the question is framed as Radical Honesty™ vs. The Little White Lie, the only compassionate answer is The Little White Lie, because the philosophy of Radical Honesty™–at least as I’ve seen it practiced–treats compassion with disdain, or even contempt.

Honesty is the best policy. Being honest is an absolute prerequisite for healthy relationships. But honesty does not excuse indifference to the feelings of others. Poor behavior is poor behavior even when it’s wrapped in the cloak of honesty.

The same is true, I think, of many different ideas about relationships.

There are a number of relationship philosophies that I think are absolutely essential to healthy positive romantic relationships. Other than honesty, they include the notion of accepting responsibility for one’s emotional state, being willing to accept and work through issues such as personal insecurity, and being willing to accept responsibility for wrongdoing without externalizing blame, among others.

Essential to all of these, though, is compassion and respect for the particular feelings and experiences of other people.

Unfortunately, I have seen examples of situations where people use every one of these principles as a blunt instrument against others. Any one of these can be subject to the Radical Honesty™ Effect–enshrinement of the principle above the basic rules of decency, to the point where adhering to the principle becomes validation enough that compassion can be discarded.

I’ve seen the idea that we are all responsible for our own emotional state become distorted by the Radical Honesty™ Effect in some parts of the poly community, where it seems to be taken as a code phrase for “I can do whatever I want to you, and no matter how it makes you feel, that’s your shit to deal with, not mine.”

With personal responsibility, as with honesty, there are compassionate ways to interact with others, and there are ways that suck. The notion that we are all ultimately responsible for our emotional states does not, in point of fact, justify one in being an arsehole, any more than honesty does.

Radical Honesty™ can become an excuse to say whatever’s on your mind without regard to the effect your words will have. The idea that we are all responsible for our own emotions can, if not watchdogged, become an excuse to behave however you like without regard for the way it affects other people. Unfortunately, what that means is that debate about either of these things tends to get framed in some unfortunate ways–honesty vs. dishonesty, personal responsibility vs. projecting responsibility for the way you feel onto others–that miss the real heart of the matter.

The heart of the matter, as far as I am concerned, is “What can I do to make my relationships stronger, built on a foundation of integrity and trust, and to help the people around me feel supported, cherished, and loved?” I don’t feel that dishonesty, whether in the form of “little while lies” or otherwise, does that; but I also don’t think that saying “Man, that dress makes your butt look like two enraged hippopotamuses dueling with light sabers under a circus tent!” does that, either. I don’t think that enabling insecurity by accepting responsibility for the emotional experiences of my partner does that; but I also don’t think that saying “Tough shit, that’s your issue, you deal with it” does that, either.

It is possible to be compassionate without sacrificing any of these ideals, which is something I rarely seen talked about in any conversations about them. In the case of a person struggling with some kind of negative emotional response, it can be as simple as “I see that this is something you are having difficulty with. I want to help support you and give you safety while you come to terms with it. Let me know how I can make you feel cherished and loved. If you need more of my time and attention while you deal with this, I am here for you.”

The key here is that any philosophy, even if it is true, does not excuse one for being a douche. This probably should be self-evident, but apparently it isn’t.

65 thoughts on “Some Thoughts on Radical Honesty”