I have, as the regular reader will no doubt have noticed, been remiss in relating the end of the tale about the adventures experienced on the road to Boston. The parts concerning giant prairie dogs, rooftop wonderlands, Guatemalans, and the fury of Nature have been related already, but a cavernous hole remains in my tale, that of our experiences once we arrived.

Fear not, gentle readers, that much-needed hole is about to be filled.

As I related before, we carefully timed our arrival in Boston to coincide with the wrath of Hurricane Irene, which had filled us with some not inconsiderable consternation yet which turned out, truth be told, to be something of a damp squib.

We spent the night–a night which, I might add with a not inconsiderable amount of frustration, we had originally intended to spend in Cincinnati in the care of the pet lesbians–watching reruns of the new Dr. Who on TV, while outside the walls Irene thundered her rage, by which I mean tossed around a few leaves and then slipped quietly away to go sulk somewhere else.

We did, as I mention before, brave the fury of the hurricane to find cheap Mexican food. Along the way, we passed this building, which is apparently for sale. 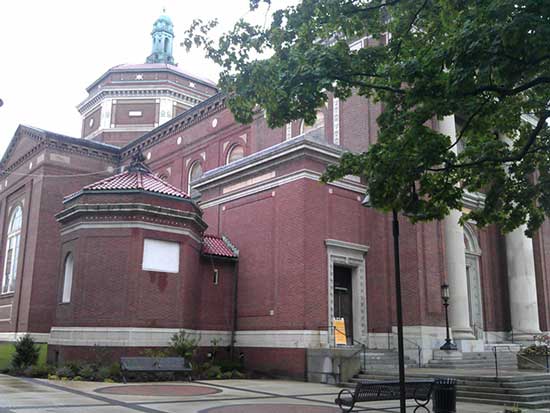 It’s an old Catholic church, on a large plot of land with an old school (complete with dormitories!) behind it. Apparently, the whole complex is long abandoned and up for sale. Oh, the thoughts that poured through my head, let me tell you…I thought, gentle readers, of secret lairs and poly communes and hacker spaces and, buried somewhere deep don inside, perhaps just a bit of doing something unspeakable on the altar, assuming it’s still there.

The next morning dawned bright and clear, and figmentj soon arrived to carry me off. I was soon able to meet her then-fiancee (and now husband–congratulations, sweetie!), and together they exposed me to downtown Boston, a weird record store, and, God help me, Bulbous Bouffant.

The latter actually came first, and it turned out to be rather a good thing. Had I not been exposed to the wonders of the Bulbous Bouffant, I might have departed that afternoon to wander Boston’s urban delights with my sanity wholly intact, and the consequences of that might have been…unfortunate. We ventured, you see, to a vintage record store.

Dear God, we ventured to a vintage record store.

I am a child of the 80s, by which I mean a teenager of the 80s, and so I’ve lived through what is arguably some of the worst pop music the 20th century ever produced. It didn’t seem all that bad, at the time; but I suppose it is always hindsight that reveals true horror. While we’re in the thick of it, our brains shut down, a protective measure gifted to us by millions of years of evolution and an ancestry made up of hunter-gatherers who were often so busy fighting of leopards with their bare hands that they couldn’t afford to spend the time to think “Holy shit I’m fighting off a motherfucking leopard with my motherfucking bare hands!” And so, during the 80s, it all seemed totally natural and normal that we would listen to music produced by emotionally volatile prima donnas with bleached hair teased to within an epsilon of reason and sanity on the illuminating topic of how bad they got it for teacher.

All this I knew, having, as I mentioned, lived through it, though that doesn’t mean I was quite prepared to come face to face with that unfortunate chapter of musical history, in the form of… 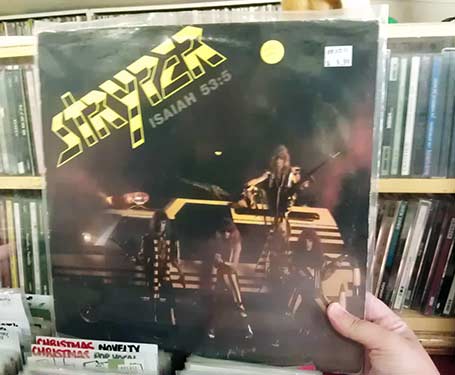 For those of you unfamiliar with the genre, which as near as I can tell both began and ended with Stryper, let me repeat that: Christian hair metal.

That wasn’t the real horror, though.

The real horror was lurking for us over the checkout counter. 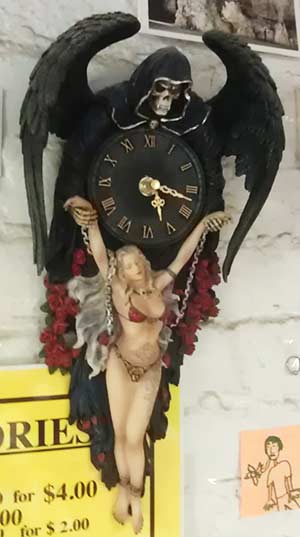 Yeah, I got nothing.

The horror of my adolescence relived, we headed out to Boston Commons.

I have a soft spot in my heart for Boston Commons. I’ve been there a few times now, and one of the best memories I have of my sweetie Shelly involves the two of us watching the two happiest puppies in the world playing with each other on the grass on a beautiful spring day there, many years ago.

On this particular day, a bit more blustery and less sunny than that day, there were no surrealistically happy puppies rolling around with each other. There was, however, a man passing out flyers and railing against the perceived deficiencies of the public school system.

I spent most of my formative years in southwest Florida, where I received, it must be said, rather a good public-school education. Upon leaving that state, for reasons far too complicated to relate here but involving some of the more appalling shortcomings of the capitalistic system under which we live, I landed for a time in Georgia, where I spent a few years being knocked about by that very same capitalistic system. While I won’t bother to give you the details, I can offer this bit of hard-won wisdom: Should you ever be given the opportunity to become a minority partner in a desperately underfunded tech startup, run. Run your ass off. Don’t look back.

The upshot of all of this is that I am deeply inculturated with the ideas and values of the American South. So I can be forgiven, I hope, for assuming, when confronted with a man in a public park angrily carrying on about the shortcomings of the public educational system, if my first impulse was to assume that he wanted the subject of evolutionary biology struck from the curriculum, or wanted to bring back a mandatory hour of prayer to the classroom, or something else along those lines. It has generally been my experience, you see, that when someone complains about the quality of education in the twentieth century, it’s because he wants to bring it back to the eighteenth.

So it was with quite some surprise and pleasure that I listened to him for a bit, and read the pamphlets he was handing out, and I learned that he was arguing in favor of teaching critical reasoning and analytical thought in the public classroom, and proposed a course of study rich in mathematics, science, and logical reasoning.

One day, Boston, I will return to you. Even if only for a short time. Oh, yes, I will.

My tale is at this point nearly finished; there is little left to relate save for the bit about the elephants, which will have to wait until next time.