There is a place that is the embodiment of all that is good and wonderful, where those who are virtuous–those who have, through the diligent and conscientious effort to right thinking and a proper attitude, developed an innate sense of what is worthy and good for the soul–can one day hope to go. And it’s in St. Louis.

Upon fleeing Meramec Caverns, which according to a little-known tale was once used as a hiding place by Jesse James (or so I’m told), we made our way to the city of St. Louis, where we stayed the night with some friends of Claire’s. The next morning, while we had breakfast on the back porch and scratched a large and patient poodle behind the ears, they said “You are going to City Museum before you leave town, right?”

At that moment, I was still naive. I vaguely recall saying something like “Yeah, we talked about doing that.” Enlightenment was, for me, still several hours away, which explains the casualness of my reply.

After we had finished our buttered muffins and bid farewell to Claire’s friends and the floppity-eared dog, we traveled in a meandering fashion through downtown St. Louis. The museum wasn’t terribly easy to locate, even with the aid of a GPS gadget whose synthesized voice makes an amusing phonetic mess of the word “Washington,” or as it says, “Waaaaaashingtorn,” as in “In five hundr’d feet, turn llleft on Waaaaaashingtorn Avenue.” But we eventually wiggled and woggled our way there, and parked in a small nondescript parking lot on a small nondescript block.

At this point, enlightenment was mere minutes away.

We rounded the corner, and the entrance to all that was good and wonderful stretched before us, as glittering and magnificent as the pearly gates of myth, only cooler–poetry written in curved rebar and patterned steel.

I still was not quite aware of what lay beyond, but at this point, I was beginning to have a dim sense that this would be an experience by which all future joy could be measured.

Part of that dim sense was sparked, no doubt, when I looked up. It’s not every day that one encounters a building with a hollowed-out airplane glued to it, with tunnels snaking around and through the superstructure. 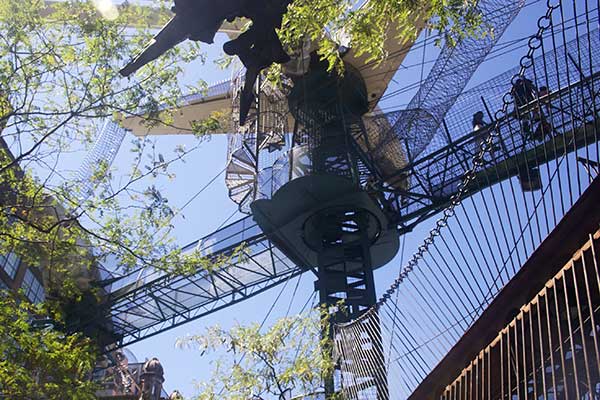 We passed through the gates and gave money to St. Peter, who turned out to be significantly less expensive than the more traditional depictions might lead one to believe. From there, we passed through a wide stone hallway, cast-iron lamps mounted to its walls, and out into a vast, tiled chamber decorated with sculptures of all sorts of strange and bizarre sea monsters. The ceiling was entirely hidden by strips of–I don’t know, foil of some sort?–which moved constantly in the air currents, in ways this image can not convey. 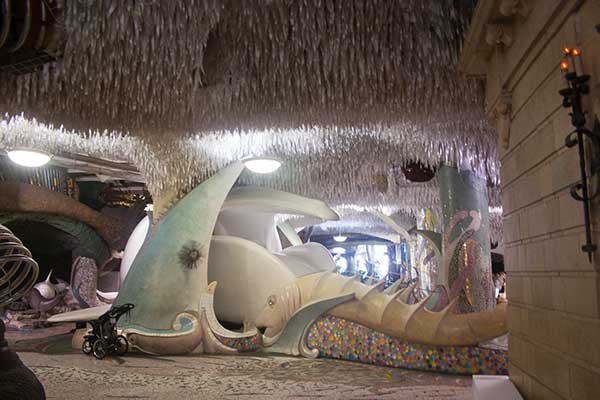 Enlightenment was roaring toward me like a freight train whose engineer, coming off a four-day bender of cocaine and a bevy of Brazilian hookers, had fallen fast asleep at his post, his hand firmly on the throttle, urging his great iron horse to an exuberance of speed far in excess of what was safe or sane, and…oh, god, that sentence got away from me a bit there. Sorry.

What you can’t see in the picture above is the ceiling, or more precisely the tunnels in the ceiling.. Most of the statues are hollow, and there’s a network of tunnels fastened to the ceiling which you can get to by limbing up, around, or through the fishy sculptures. It’s awesome. 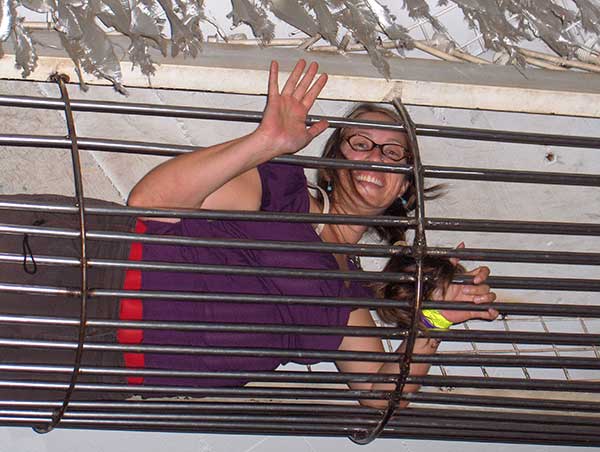 Above the ceiling is a crawl space, about four feet tall or so. The crawlspace itself, accessible only through the tunnels, is a warren of more tunnels, strange spaces, sculptures, pipes, and little little maze-like things that bring the explorer out abruptly into unexpected metal balconies. 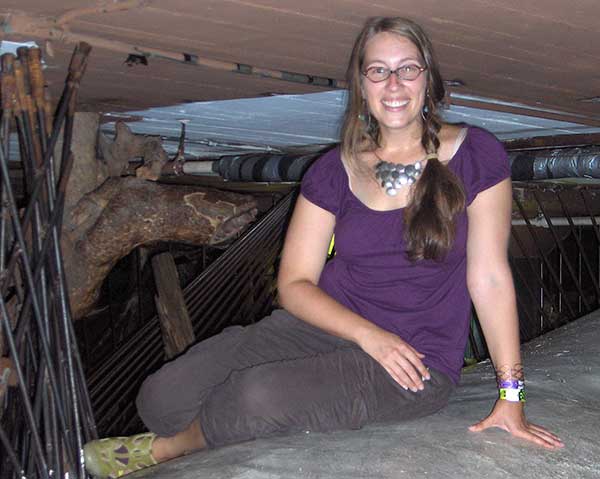 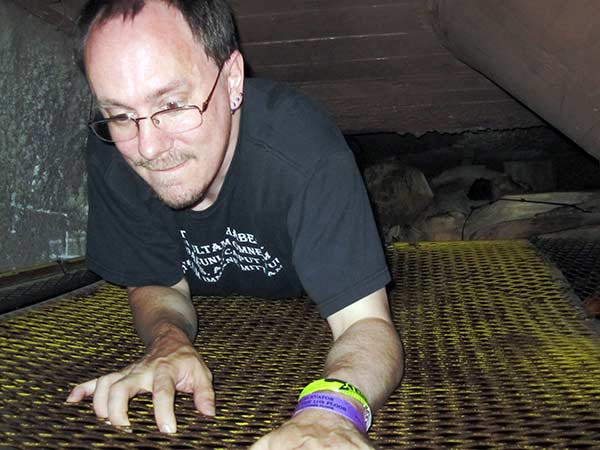 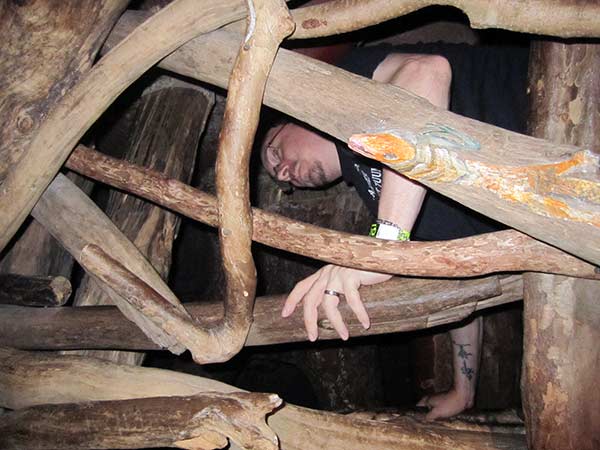 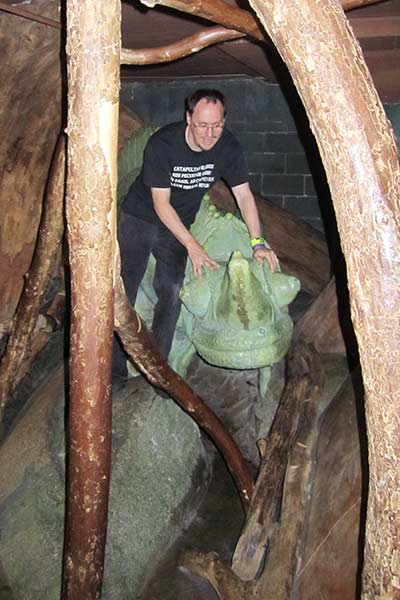 By now, the eight-year-old inside me, who as I have probably mentioned really isn’t all that different from me, was just absolutely singing with delight And we hadn’t even started to scratch the surface of awesome yet.

City Museum is like a candy bar made of awesome. Beneath the milk chocolate coating of awesome is a creamy center of nougat filling made of awesome, with a rich caramel layer of sweet, sweet awesome carefully folded on top. No matter how far you explore, something even more awesome is awaiting the next…um, bite.

Upon crawling down out of the ceiling, we found ourselves in another huge room, dominated by an awesome staircase of awesome up to the second floor, which was made all the more awesome on account of being flanked by a gigantic slide coming down.

A gigantic slide! Running all the way down the stairs! 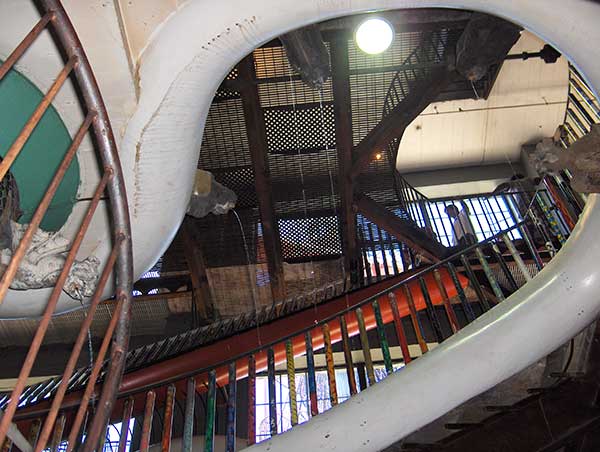 “Giant slides” is actually something of a standing theme at City Museum. At one point, we discovered a narrow space on the second floor with a small trap door that descended into darkness. Claire hopped into the hole and found a long, dark slide that drops down into the basement, where a narrow slit in the wall brings one back up into the Land of Weird Fish Sculptures It’s hard to imagine, even with all the faculties of the human mind, anything more fun. 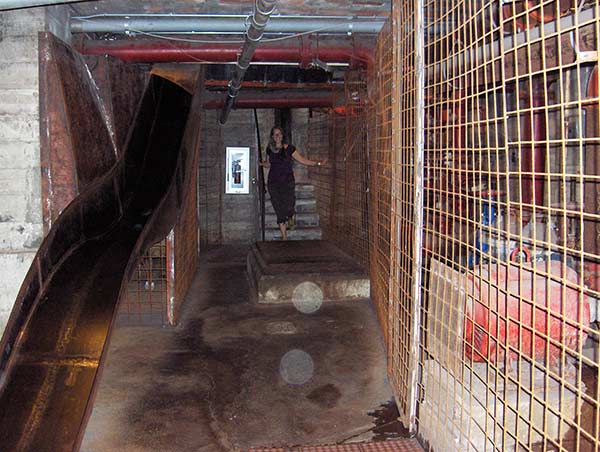 The top of the slide that hugs the stairway looks like this: 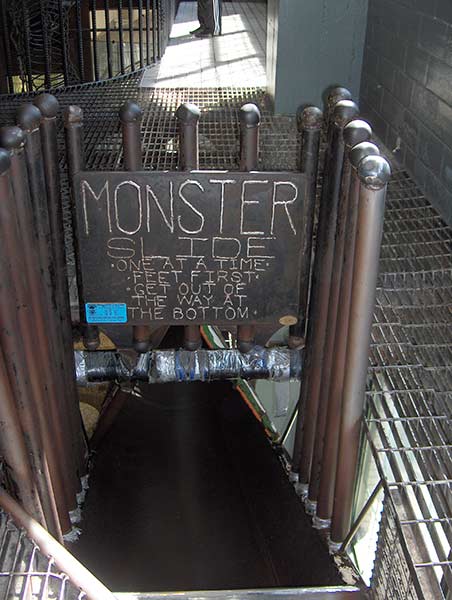 Midway down the slide, this is the vista which presents itself to the rapidly descending visitor.

I want that giant round cage, oh yes I do. The things I would do with it would contravene at least sixteen international treaties. Oh, yes. I even have the perfect padlock for it…

We spent a couple of hours running (and sliding) around with glee, and then we decided to head up to the rooftop, which is also part of the museum.

That bit, however, will have to wait until next time.