I have never quite understood the romanticization of famous criminals.

I mean, I just don’t get it. People look at, say, the Mafia, or serial killers, and make them out to be some sort of romantic mythic figures, blazing their own path through life, heedless of the laws and mores of ordinary folk and occasionally feeding ordinary folk into wood chippers. I’ve heard that imprisoned serial killers actually get fan mail, often from women who offer them sex or marriage or both, and frankly I find it all bewildering (and just a touch unsettling).

Take Jesse James, for instance. What is it, exactly, that was romantic about this guy? As near as I can tell, the man was an illiterate, slave-owning, narcissistic sociopath who discovered a taste for killing people as a mercenary for the Confederacy and, after the war, privatized his former government service job by robbing banks and murdering clerks, students, tellers, and random passers-by–sometimes while dressed as Ku Klux Klansmen.

Just the sort of person you want babysitting your kid, right?

I mention Jesse James because some hours after leaving the Glore psychiatric museum, and with brains still reeling from the experience, we opted to stop at Meramec Caverns in the once-Confederate state of Missouri.

Meramec Caverns is a large cave system that’s noteworthy for a number of reasons. It’s geologically unique, sporting some of the largest-known limestone formations in the world. It was a part of the folklore of the Osage tribe of Native Americans, who used it for shelter. The cave system was said to be used as a waystation on the Underground Railroad prior to the Civil War.

And apparently, Jesse James hid in it once.

Of all these factoids, it’s the last one that gets the most press. In fact, as soon as you arrive, there’s no question at all about what you’ll be getting for your entertainment dollar: 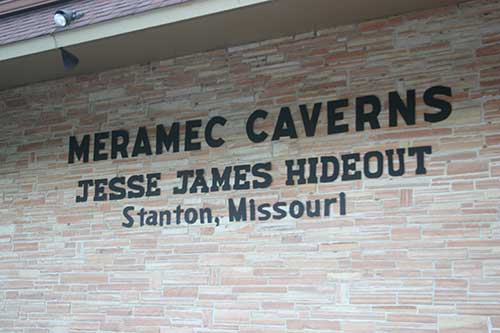 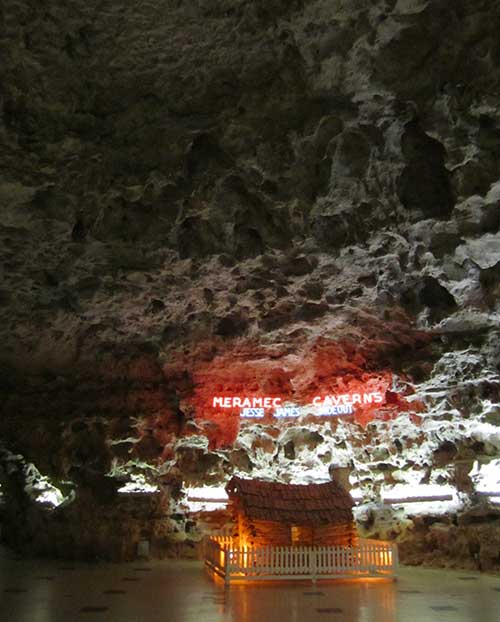 We walked past a model of a small wood cabin that was, apparently, similar to a cabin once stayed in by Jesse James, through an enormous chamber that was in times past used as a ballroom, and then brought past a couple of statues which, the tour guide explained, were placed on the spot where a sheriff had discovered boxes known to have been stolen by Jesse James.

Occasionally, I consider the fact that more people know about small-time thugs like Jesse James than about Norman Borlaug, the dude who got considerably less fame by saving the lives of over a billion people, but I digress.

The cave is actually quite lovely. In a lot of ways, it’s absolutely the perfect, Platonic ideal of a cave, with huge chambers and small passages and even an underground river. An underground river! How cool is that? Our guide explained that when Jesse James holed up there, the local sheriff cordoned off the entrance, but Jesse James was able to make his escape by swimming down the river and discovering a heretofore-unknown exit.

It’s quite dramatic all on its own. 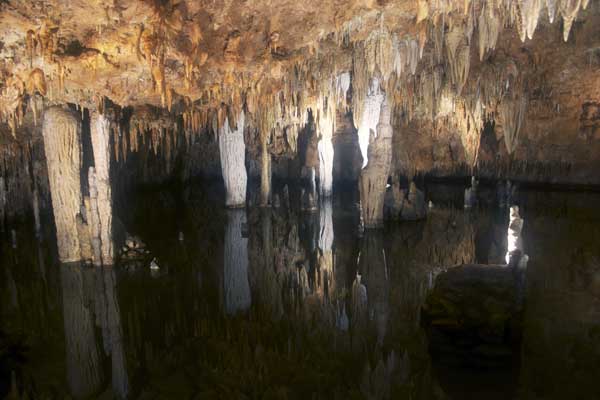 Apparently feeling that the natural wonder of sparkling, crystal-clear water rushing underground along a path that’s dripping with all manner of limestone formations isn’t enough, the cave’s owners have put in a bunch of colored lights, to make it even more dramatic.

I do have to admit it’s pretty. 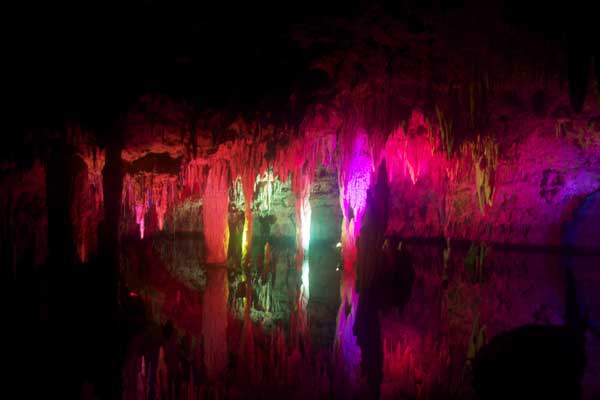 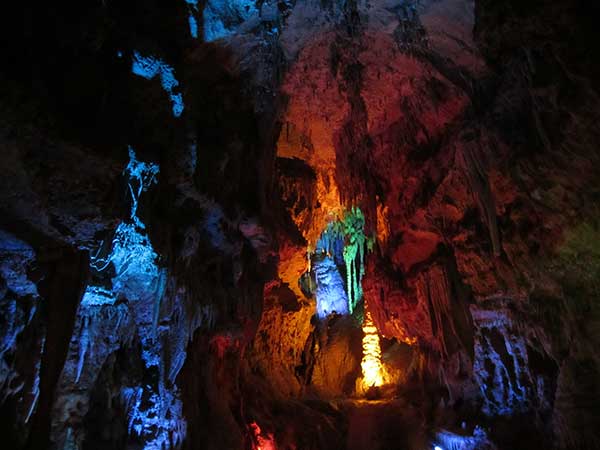 The cave is altogether lovely even when it’s not being lit like a bad 80s hair metal band. 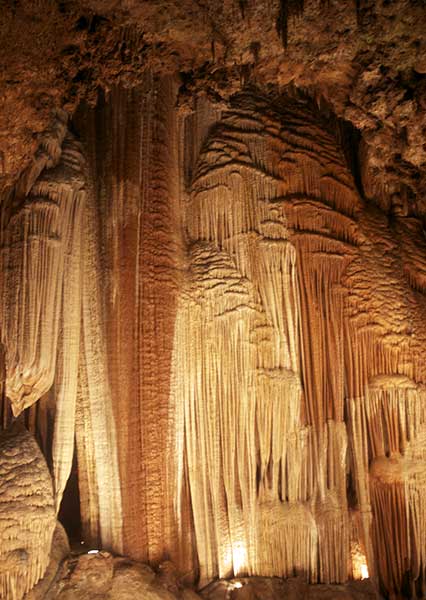 The passing time was freaking our travelling companion Erica out a bit, as she doesn’t like driving at night, but Claire and I had quite a lot of fun on the tour. At least those bits of it that weren’t about Jesse James, who as I may have mentioned was a murderous, sociopathic thug with bad hair and in whom I am almost entirely uninterested. I got a lovely picture of Claire some way through the tour. 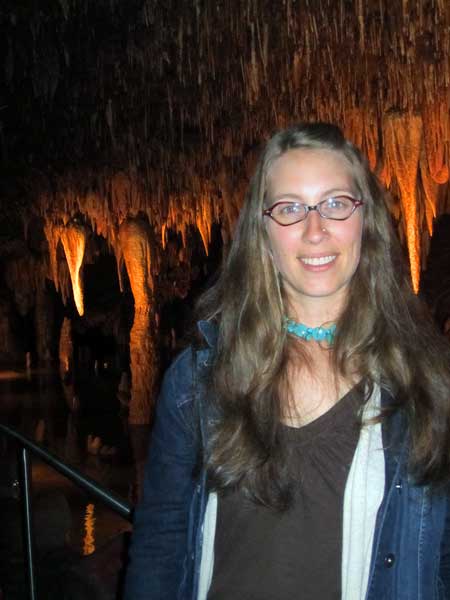 Shortly after this photo was taken, we arrived at the end of the tour.

I have no pictures of what awaited us there. If I did have any pictures, I would be reluctant to share them with you, Gentle Reader, on the grounds that, unlike Jesse James, I am not a violent, sociopathic thug with bad hair, and I bear you, my blog-reading public, neither malice nor ill will.

Indeed, it is with some trepidation that I even describe the horrors that await those who take the tour in mere words, for the experience is not for the faint of sanity.

Imagine, if you will, a vast, bowl-shaped chamber upon whose sides have been poured many tons of concrete, to better accommodate the stadium seating set therein. Imagine that this seating faces a quite lovely, and very large, waterfall of solid rock, the slow accumulation of limestone carried by the endless drip of water over a period of hundreds of millions of years–a breathtaking example of nature’s subtle and profound beauty.

And now imagine the part ranger–the one who talked to us about Jesse James–playing a tape recording of what might once have been stirring patriotic music, many many decades ago, while presenting a light show against that magnificent backdrop of rock, complete with projected images of the American flag, by…

…I swear I am not making this up…

…furiously toggling a large panel full of light switches to make colored lights flash on and off.

It’s a spectacle that I don’t think could be found anywhere else on Earth besides a cave in the American South, a simultaneously cheap and cheesy display of faux patriotism that’s almost, but not quite, a parody of itself, and so very, very, desperate in its sincerity. I don’t think I’ve ever seen anything quite like it, and the memory of the spectacle has, I feel, filled a much-needed gap in my life.

I’m not quite sure how we left the cave. It’s entirely possible that the combination of lights and sounds to which we were exposed had temporarily stunned my ability to form short-term memory, my brain seeking some Freudian mechanism to cope with the essentially un-copeable. Or, and perhaps more sinister, it’s possible that we were exposed to some highly advanced form of neurobiological programming, planting the seeds of behavioral conditioning deeply into our psyches, awaiting only a television ad for Fruity Oaty Bars to transform us into unstoppable killing machines, unwitting foot soldiers for the new Confederacy or something.

Our behavioral conditioning for our new Jesse-James-loving, cave-dwelling Southern overlords complete, we headed out into the night. The next day would bring with it an experience that the eight-year-old in me will never forget.