If you drive across the American Midwest on Interstate 70 for long enough, a sort of hypnosis begins to set in. The road goes on and on and on and on, and there’s nothing interesting on it, save for the occasional dead animal of indeterminate species on the side of the road.

If you continue driving, eventually your brains will liquefy. Your eyes will begin to bleed. Strange apparitions of Hunter S. Thompson doing battle with Napoleon against the backdrop of war-torn Sarajevo while gibbons drift high in the sky strumming gently on lutes will slide in and out of the corners of your vision. When that happens, keep driving until you find your happy place. You know, the one where small insectoid life-forms crawl out of unexpected parts of your body demanding Pop-Tarts.

It is about then that you will see Prairie Dog Town, in Oakley, Kansas, just a stone’s throw from the interstate.

Prairie Dog Town is a microcosm of everything that is strange and horrifying about Middle America. It is the quintessential slice of Americana. Ray Bradbury could set horror films there. It advertises the world’s largest prairie dog, among other wonders and atrocities too numerous to mention. So it was a given that we had to stop there.

The Jesus of Wheat adorns a series of billboards that cluster along the interstate near a small town almost exactly an hour west of Prairie Dog Town. We pulled off the interstate to eat, as up until this point we had subsisted largely on lovely, succulent grapes hand-fed to us by Claire. This is a wonderful way to dine, and I highly recommend it, but inevitably we hit Peak Grape and it was all downhill from there. Soon we were forced to confront a stark reality: There Were No More Grapes, and it was time to deal with that, whether we liked it or not.

So we stopped for sandwiches, and met the Jesus of Wheat. 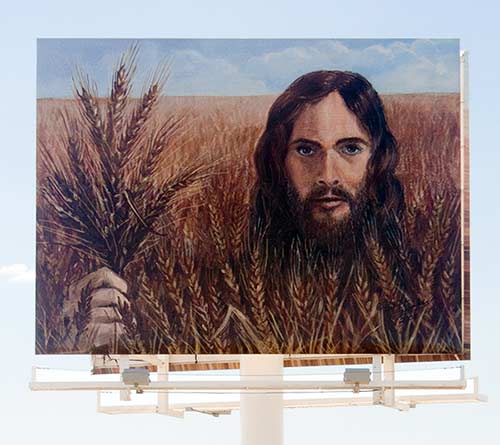 I don’t know what this billboard means, other than Jesus really, really loved wheat. This image occurs on every onramp and offramp in the town, as near as I can tell: Jesus, looking enigmatic, holding a stalk of wheat in His freakishly-long and perspectively-challenged arm.

Or at least I think it’s his arm. Maybe that hand is thrusting up from the ground, clutching wheat in its cold lifeless fingers, as a parable for the cycle of all life and the inevitable coming of the Zombie Apocalypse, I don’t know. I spent some time trying to work out the mechanics of whether He could actually hold wheat that far from His body, and I will admit, ultimately, to theological bafflement. Perhaps there are some things Man was not meant to know.

At any rate, I really had to record the billboard for posterity, by which I mean my blog. So while my companions dined, I slogged back up to the interstate on foot in 99-degree heat, roughly a half mile away or so, to get this shot.

The 99-degree heat turns out to be relevant later, as we shall see.

The theological ambiguity of the Jesus of Wheat left all of us, I think, in a fragile state of mind, so when an hour later we saw signs advertising Prairie Dog Town, our natural resistance–what little was left after the endless drive, anyway–was already considerably eroded.

Prairie Dog Town is a small, dilapidated building with signs promoting the World’s Largest Prairie Dog and other wonders beyond mention. It’s the sort of place that serial killers stalk in Oliver Stone movies, or the Great Cthulhu might seek out for a midafternoon snack of moon pies and the souls of the damned. We went in the front, picked our way through a gift shop overflowing with rattlesnake egg paperweights and small carved wooden toys, and bought our tickets in the back.

The back of the shop is crowded with the fruits of the taxidermist’s art, applied to various abominations of nature like this two-headed sheep calf: 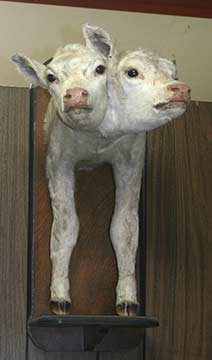 It’s also lined with a series of very large wooden crates, about five feet tall and topped with wire mesh. “Go ahead!” said the lady working the till to my traveling companions. “Look inside! See what’s in there!”

As soon as they did, she hit the crates with a stick. About a dozen rattlesnakes, all of them more pissed off than Dick Cheney on a quail hunt, immediately started rattling and striking at the wire mesh, much disconcerting both of my companions. The smile on the woman’s face suggested that she lives for that. 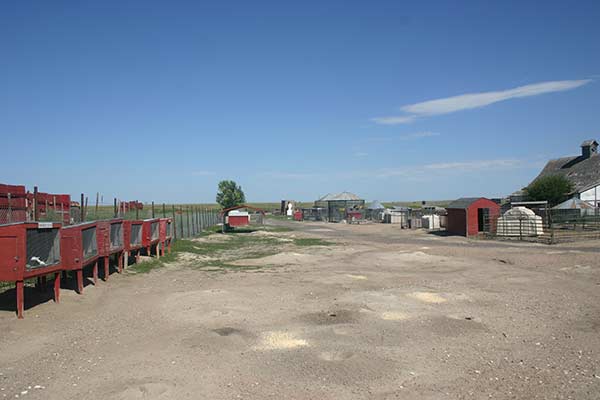 Each cage contains a forlorn animal or three. There are two aspects to the Prairie Dog Town Experience which this picture cannot convey: the brutal, oppressive heat that settled on us like a tangible, suffocating thing; and the smell. Oh, God, the smell.

Though, in all fairness, most of America’s heartland smells that way.

Beyond the eponymous prairie dogs, the pride of the collection at Prairie Dog Town is their herd of mutant five-legged cattle. Yes, they are mutant cattle, and yes, they have five legs, the fifth one of which dangles pathetically from their back. 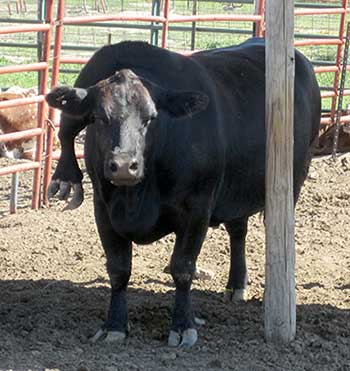 This is exactly the sort of thing one sees when something goes wrong with an organism’s hox genes, as I was talking about a bit ago.

The place also offered for our amusement birds of various descriptions, some really forlorn-looking foxes behind a wire enclosure, a couple of pigs, and a very friendly donkey who was quite happy to see us. 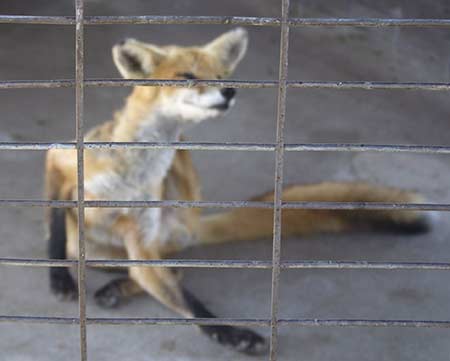 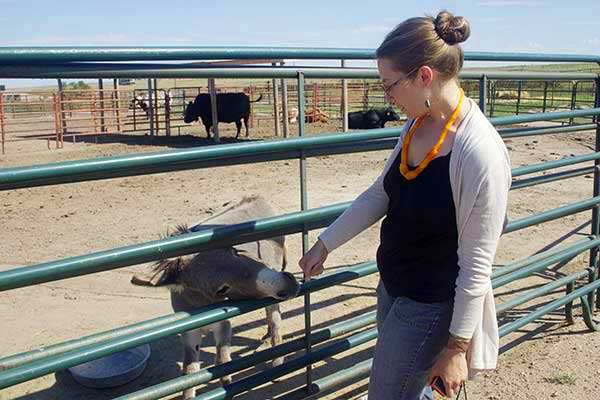 And, of course, it had prairie dogs, who perched in the heat and chittered at us reprovingly, as if to say “You paid money to be here? Didn’t the Jesus of Wheat warn you about this place?” 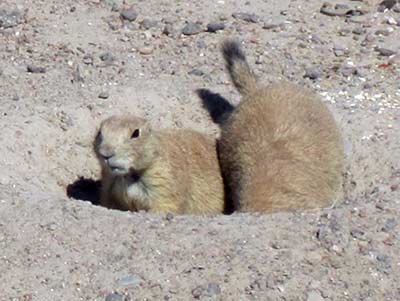 It also had, true to the billing, the World’s Largest prairie Dog, which is neither a prairie dog nor particularly large. It’s a big fiberglass sculpture of something that’s vaguely reminiscent of a prairie dog in overall body plan, though the artist seems to have missed some ingredient, some artistic flair that might have captured that spark, that fundamental essence of the Platonic ideal of prairie dogs, or for that matter even of mammals in general. 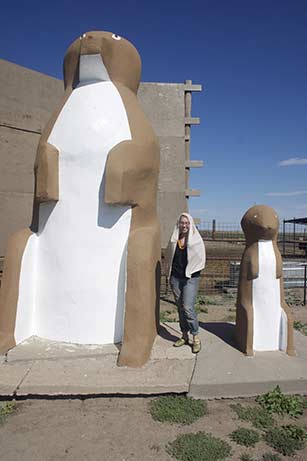 That’s Claire standing next to it, using the high albedo of her sweater as a partial defense against the blistering hot radiation of the uncaring sun bombarding us from above.

A bit dispirited and lighter of currency, we finally wandered back to the safety and relative sanity of the car, each of us bearing the psychic scars of the time served in that place.

Fortunately, the most amazing thing the eight-year-old within me has ever seen was in our near future. Unfortunately, the time was now close where we would lose one of our numbers to the Guatemalans. But both of those stories will have to wait.

14 thoughts on “Boston Chapter 4: The Horror of Middle America”