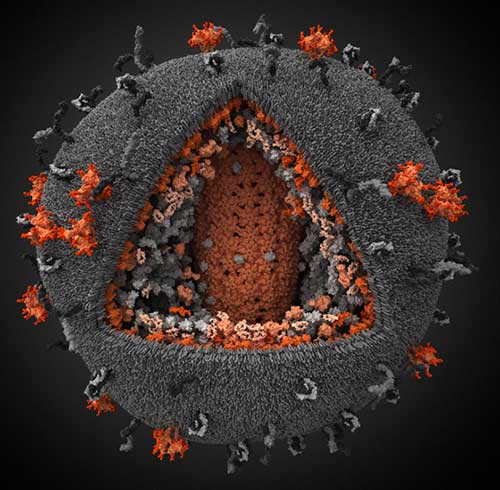 From the article on the Web site:

HIV virion is a roughly spherical particle with a diameter between 100 and 180 nm. Virion is surrounded by cell-derived lipid membrane containing surface proteins. Some of these proteins are products of viral genome (surface glycoprotein gp120/gp41) and others are captured from the host cell during viral budding (e.g. ICAM-1, HLA-DR1, CD55 and some others). The gp120/gp41 glycoprotein interacts with receptors on cell surface promoting fusion of virus and cell membranes. Other surface proteins found in HIV perform supporting functions. […]

Click on the picture for a larger version and other visualizations showing different cross-sections of the virus.