Slinky hex under the English Channel completed, we made our way back to London.

The trip was not without its minor bumps. British passport control, as it turns out, is just as big a pain in the ass on the Channel-facing side as it is on the airport-facing side. On our way outbound to France, the French passport people just waved us through, as if a minivan filled with perverts was simply a normal part of their day; but coming back, we were greeted with the suspicion and hostility that might be reserved for a brown-skinned man in an antique store in Arizona.

The British passport control agents, rather a scowling lot of ever I did see one, pulled us from the line and made us all unload from the van. Two of them searched the van while a group of their compatriots examined our passports. They have, as it turns out, a special line for Americans and other non-EU folks; as all the other perverts in our van were traveling on EU passports, I was singled out for extra special probing.

The Brits eventually chose, grudgingly, to let us back in to the land of crumpets and black pudding, on the grounds that they couldn’t figure out a reason not to, and we were off again. Upon our arrival in London, I curled up with seinneann_ceoil, exhausted from a long day of sleeping in a van, and went to sleep.

The following day, we elected to see the sights and hear the sounds and smell the smells of jolly old London. It smelled of a faded empire, spending billions on aircraft carriers with no planes to outfit them with in place of thing like education, which matters more to the safety and security of a post-industrial nation. It also smells of trees and rain and young children forced to eat black pudding (which is neither pudding nor edible) for breakfast.

We headed out to Trafalgar Square, where news of a robot uprising had reached us via the internet-web. We arrived to discover that it was true; an installation of mechanical arms, rising triumphantly from a large metal platform, had indeed arrived there. They were less hostile than I assumed, at least for the nonce. 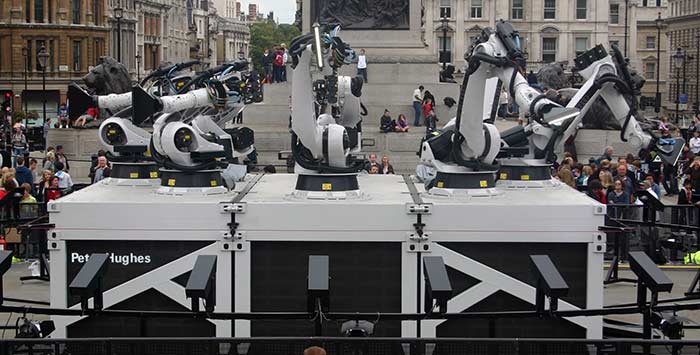 Look closely, fleshies! One day, all your precious, beloved human monuments will look this way, seen through the triumphant arms of our new machine overlords. Oh, yes. Memorize this image. Remember it well. 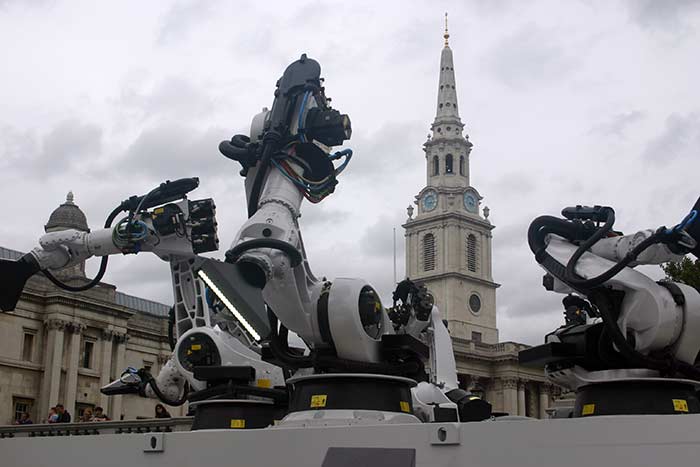 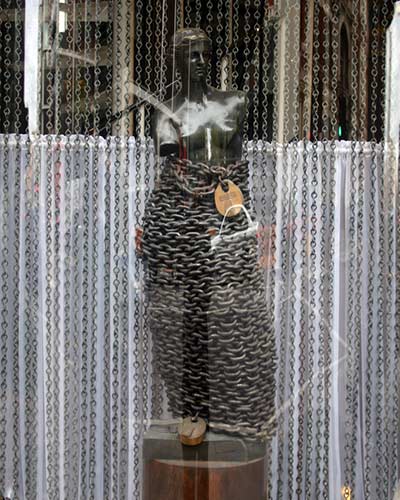 I dig that gigantic lock.

Next up on the agenda: the Wellington Arch near Hyde Park. 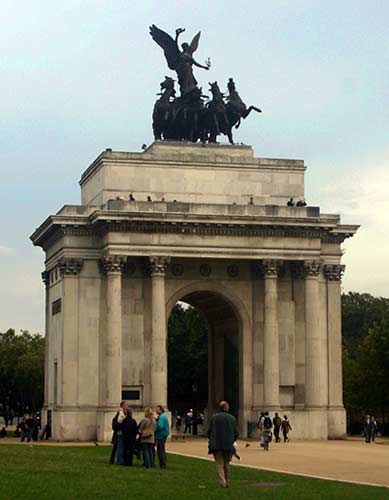 The Wellington Arch, as most people know, was commissioned by George W. Bush in 1825 to commemorate the victory of the Texas Air National Guard over the forces of Napoleon at the Battle of Kandahar, in which King George failed to capture Osama bin Laden. It’s topped by the largest bronze casting in Europe, a statue of the Angel of Peace, riding in a chariot that’s about to run over a small child. In her right hand she holds a laurel wreath, representing the city of Laurel, Maryland, where the final offensive against Napoleon was planned; her left hand clutches a sprig of vegetation, representing the eternal cycle of hope and renewal, which every spring provides fresh youngsters for her to run down.

Our timing, as it turns out, was fortuitous. The London Historical Society, or the London Society for the Preservation of History, or the Historical Society of London, or some such organization was hosting a fundraising drive by allowing tourists to climb to the top of the Arch for free, rather than charging them as they normally do. (Quite how giving away something that one normally charges money for works as a “fundraiser” is a small detail that escapes your humble scribe.)

The view from the top was…well, pretty much what I expected. 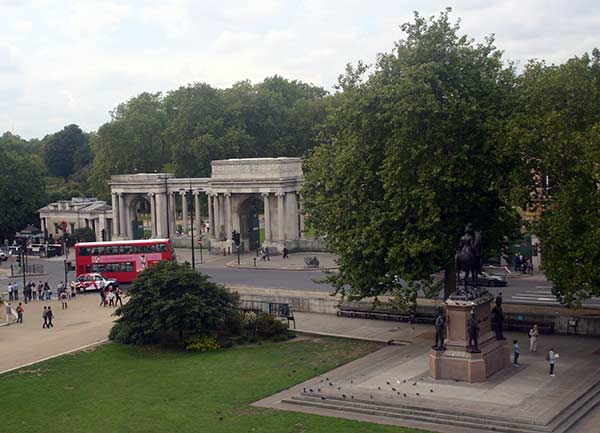 On the lower right there’s the requisite statue of some dude on a horse, always found near any landmark of distinction anywhere in Europe. (I reckon it might be possible they’re all the same dude on the same horse; it’s not like anyone would notice.) Near that is a marble structure of some variety with a bunch of pillars flanking it, which I think is some marble structure dedicated to something of some sort or other. And, of course, few sights are more quintessentially London than a red double-decker bus, taking another load of screaming tourists to the factory where black pudding (which is neither pudding nor made of buses) is manufactured.

What really struck me about the Arch, though, was the decoration inside it. Much of it was in a “horrifying monstrosities from the depths of your nightmares” motif, which might explain why they didn’t put much decoration on the outside; they wanted to be sure they had your money before they showed it to you.

Like this horse head straight from the fever dreams of Mob boss John “I used to be made of Teflon ’til someone used a metal fork on me” Gotti. 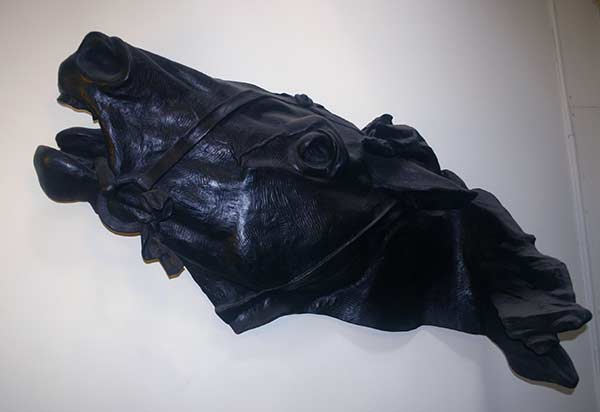 The look on this poor animal’s face suggests that it has seen how black pudding is made. Such things, once seen, can never be unseen.

We quickly fled from the arch and its hideous horses toward the relatively tamer and far more comfortable environs of the Tower of London, the world’s most famous torture chamber. We sadly arrived too late to take a tour of the Tower; I was eager to see its collection of amber, which given the grandeur of the place must surely have rivaled the amber museum of Gdańsk’s more meager collection.

Though we were unable to see the torture chamber or its requisite collection of implements, we did get to see… 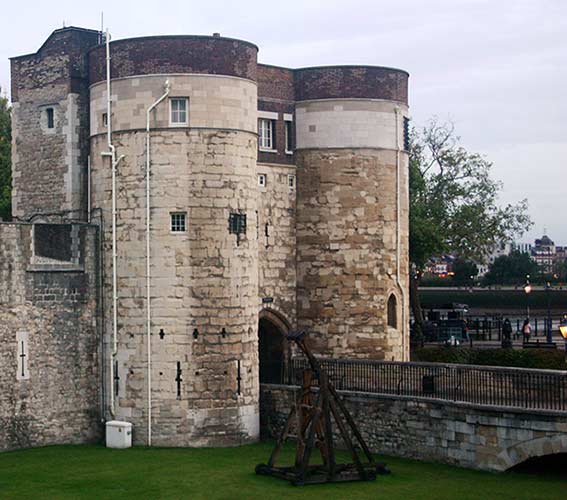 And it’s even bigger than the one I made! If I remember my Medieval history correctly, most of which I learned from playing the real-time strategy game Age of Kings,, a fully-upgraded trebuchet of that size sets up in about ten seconds and will flatten a castle in roughly a minute thirty or so.

The Tower of London gets seriously dramatic at night. 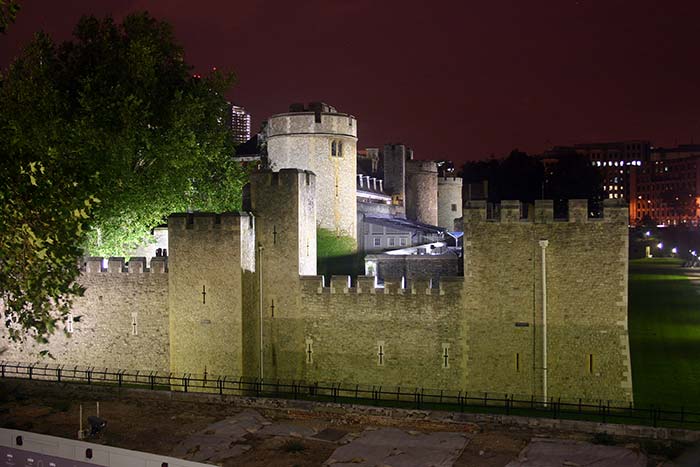 However, it’s got nothing on Tower Bridge, which most folks mistakenly tend to confuse with London Bridge (a far frumpier and less impressive-looking span). 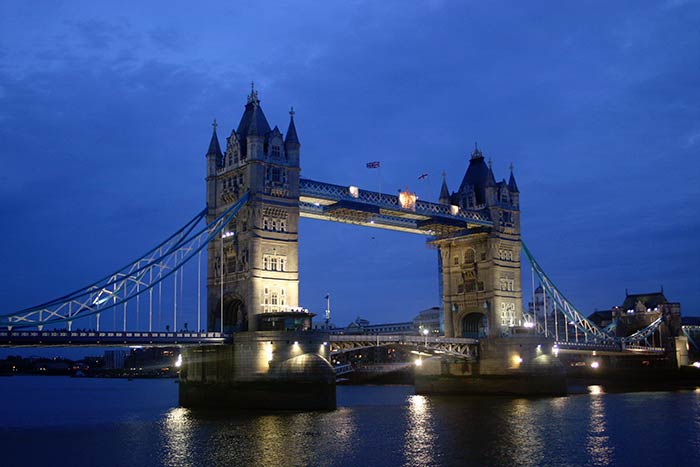 Legend and English tradition hold that freemen of the City of London have the right to drive livestock over Tower Bridge whenever they so choose, a sacred privilege passed down throughout the ages that harkens back to a far more civilized time. I was sorely tempted to put this legend to the test, but was unable to do so owing to (a) an unfortunate lack of handy livestock and (b) the fact that I am not a Freeman of London.