From The Pharyngula blog comes this little gem, a page from a Fundamentalist Christian textbook about electricity.

Now, anyone who’s read my blog for any length of time will know I’m no fan of right-wing religious zealots. But occasionally they manage to surprise me. Sadly, they tend to surprise me by not even rising to the bar of my already abysmally low expectations; no matter how bad, how ignorant, how credulous, or how dishonest I think these guys are, they somehow manage to be worse.

Here’s the page, scanned from a fourth-grade home-schooling textbook on science (click for a larger version): 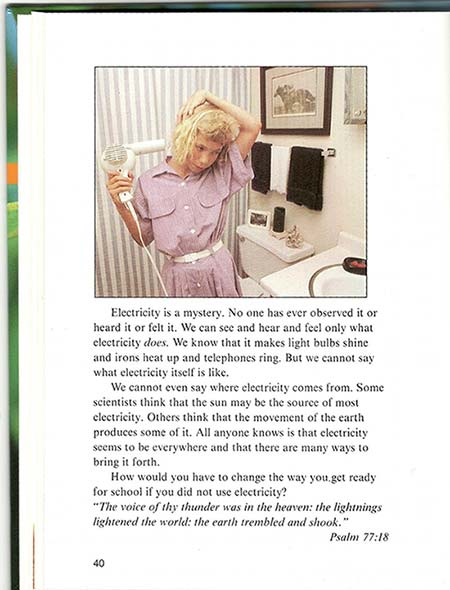 This kind of thing is the reason I cringe whenever I hear the phrase “home schooling.” I know there are home schoolers who aren’t ignorant Fundamentalist boobs, but damn, they sure do seem to be a small percentage.

The notion that someone can spout nonsense like “We can not even say where electricity comes from. Some scientists think the sun may be the source of most electricity. Others think that the movement of the earth produces some of it” interspersed with Biblical passages and call the result a science textbook is, to me, beyond belief.

A part of me wants to think that whoever wrote this nonsensical tripe was deliberately lying, because the notion that the author genuinely doesn’t know what electricity is, and furthermore can’t be arsed to look it up on Wikipedia or something, blows my mind. But, no, I do think it’s at least possible that whoever wrote this passage sincerely believes what he wrote.

Taken in a larger context, though, it doesn’t matter whether or not he believes it, or understands enough basic science to understand what electricity is. (“We cannot say what electricity itself is like”? Seriously?) The goal of this book is not to educate the reader about science; indeed, I think the goal of any home-schooler using this material is not to educate their child about science.

No, the goal is something very different. It’s twofold, really. The most obvious intention here is to present the world in a way that makes it as opaque as possible, while simultaneously denigrating the ability of science to make any sense of it; science, in the minds of the Fundamentalists who write and teach drivel like this, is a haphazard conglomeration of a bunch of competing wild-ass guesses about the way things might work, each of which has no real basis in fact. Some scientists think our electricity was produced in the sun; others think that some of it might have come from the movement of the earth. (As a person in the dismal movie Jesus Camp says, “science doesn’t prove anything.”1)

The second aim of this textbook is something more subtle. There is an axiom among many religious Fundamentalists that we can never know something which we do not observe directly. This argument pops up in Creationist arguments with depressing frequency; since we can not go back and directly observe, as a firsthand eyewitness, the creation of the earth or the advent of life, we can never know how it went down; ergo, all ideas about what might have happened are equally likely. And since only one of those ideas has the imprinteur of God, that’s the most likely one. All the other ideas are merely idle speculation; since we can’t go back and see it happen, we can’t actually say we have any evidence for it. Only eyewitness evidence2 matters.

And on those counts, I think this passage does precisely what it intends to do.

1 Which might be true from a particular perspective, in the sense that the scientific method seeks hypotheses which are falsifiable, and model is only as good as the next data point which contradicts it. But the Fundies who spout “science doesnt prove anything” mean something quite different; they’re basically saying that science is not useful as a tool to understand the physical world. And that blatantly isn’t so.

2 Or the scribblings of a bunch of barely literate Bronze Age tribesmen which have been shuffled around, rearranged to suit various political factions several times throughout history, and then badly tanslated into a succession of languages, presumably.

66 thoughts on “Electricity? It’s a mystery!”