Back in the days when I worked prepress for a living, one of the jobs I worked on was a magazine called Vinage Motorsport magazine. It appears the quality of their design has gone downhill from those days, if the ugly layout of their Web site is any indication, but I digress.

Anyway, one of the issues of Vintage Motorsport I worked on was dedicated to a race car driver named Jim Hall and a race car production house called Chaparral Cars.

Chaparral was kind of the Scaled Composites of the auto-racing world, turning out radical, weird-looking vehicles that resembled nothing else on the race track. I’ve never been much into sports in general and I particularly detest automobile racing, but the story of Chaparral Cars is really interesting nonetheless.

This is actually a post about transhumanism, not race cars. Bear with me, I’m getting there.

Jim Hall and Chaparral Cars competed in an old, now-defunct racing circuit called the Can-Am Challenge Cup. The Can-Am series was quite different from other race car series, such as the Formula 1 series, in that it had a no-holds-barred, “anything goes” approach to race car designs.

Cars entered in Can-Am races had to have four wheels, the wheels couldn’t be totally exposed, they had to have two seats, and they had to bedriven by an internal combustion, reciprocating engine–no jets or rockets.

Other than that, anything went. There were no limitations on the size of the engines or the cars, the technology used by the cars, or pretty much anything else. If it had two seats and an internal combustion engine, and met basic safety requirements, it was legal.

Which I think is pretty interesting.

Back in the mid-60s, when the Can-Am first started, the state of the art in race cars wasn’t particularly advanced. Little was known about aerodynamics, and many of the design elements we now take for granted in race cars (high spoilers, for example) didn’t exist.

The Chaparral designs all aimed not to improve horsepower but to make the cars stick to the road better. After the success with adding wings and dams to help guide airflow and keep the car stuck to the road, the design team got more and more radical (and weirder and weirder); later cars featured moveable wings bolted right to the axle rather than to the car’s body, which would tilt up to increase downward thrust when the car was cornering and tilt down to decrease drag on straightaways.

These cars look pretty ordinary to modern eyes, but back in the day, they were radical–nothing else like them existed. The designs succeeded very well. Rather too well, really.

In the late 1960s, the Can-Am body started to turn away from its “everything goes” philosophy, and outlawed the use of moving aerodynamic structures and the use of wings affixed directly to the rear axles rather than the car’s body.

Chaparral rose to the challenge with the 2J, which had no wings or spoilers at all and is arguably one of the weirdest race cars ever built:

You’ll probably notice the weird jet-engine-looking thing sticking out the ass end of this car. What you’re seeing is a pair of powerful fans powered by a snowmobile engine. The fans suck air from under the car, creating a suction so powerful that when they’re going at full blast, the car can actually stick to the ceiling.

Needless to say, the car didn’t need wings or spoilers or other tricksy features. It could corner so fast the driver’s head tended to get whacked up against the roll bar on the inside of the cockpit. It set a record at the Chaparral test track that’s never been broken.

In fact, it was so successful that Formula 1 designers took note, and applied the same concept to a Formula-1 car, the BT46B:

And then something predictable happened. Rather than competing on innovation and engineering, other race teams complained to the various racing bodies about these designs. The BT46B raced once (and won handily) before being outlawed by the FIA. On the Can-Am side of the circuit, the other drivers–apparently forgetting the entire point of the Can-Am circuit– complained that if the Chaparral 2J design wasn’t outlawed, Chaparral would dominate the series and nobody else would be able to compete. The Can-Am body outlawed the 2J design shortly thereafter.

And in my opinion, racing got a whole less interesting.

But all that is just the prequel. It isn’t what I really wanted to talk about.

What I actually came her to talk about is the Olympics.

The Olympics is this sporting thing that’s supposed to be all about testing the limits of human athletic achievement, or something like that. Every two years, the world’s most accomplished athletes gather together to compete in sports like running, swimming, swapping votes for figure skating, bribe-taking, ping-pong, and sweeping ice with a broom. (There’s also the competition to see how fast a bunch of world-class athletes can go through a pile of 50,000 condoms, but they don’t award medals for that, apparently.)

Human society, technology, and culture change, and the Olympics strives to change with it. That’s why athletes no longer compete naked, the games are open to professional athletes, the sacrifices to the god Zeus have been phased out and replaced with burnt offerings to the gods of Marketing and Branding, and sports like Tae Kwon Do, Vollyball, Piss Into a Cup, and the popular Prove You’re Really a Woman have been added to the roster.

In 2008, the International Olympic Committee showed there were limits to how far it would go, when it took time off from accepting bribes from host cities to rule that amputee Oscar Pistorius could not compete in the Games on the grounds that having no legs gave him a clear advantage over his less-advantaged fellow athletes.

I’ve talked a couple of times before about how I feel about the intersection of ability, disability, transhumanism, and body modification, but never directly in the context of sports before. 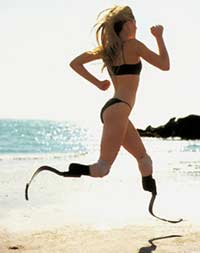 I’ve been thinking quite a bit lately about the old Can-Am races. Before they disintegrated into cries of “We aren’t as clever as our opponents; someone make rules against their cleverness!” they were a very interesting playground for motor sports, the one place in all of racing where people could really explore the question “How fast can be make a race car go, anyway, if we really put our heads to it?”

Nominally “disabled” athlete Aimee Mullins, who mentions in her brilliant TED talk that a friend of hers said “that’s not fair!” when confronted with Ms. Mullins’ interchangeable legs, discusses some of the issues around turning a disadvantage into an advantage. I’d like to take that idea and run with it.

What would happen if someone were to do to the Olympics what the Can-Am did to motor sports?

A runner wants to run the 250-meter dash on six-foot carbon-fiber stilts with springs built in? Have at it! Another runner comes up with an implant that superoxygenates her blood? Sounds good to me! Let’s see what the human body is really capable of, when we start pushing the design limits.

As it stands right now, new world records are usually set by fractions of a second. The old world record for the 100-yard dash is 9.0 seconds? Pish-posh! Let’s see if we can cut that down to 7.2. As long as you do it with human muscle power, sans boosters or wheels, it’s all good. 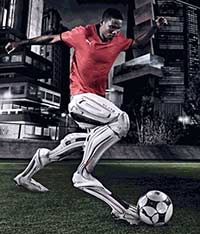 When I first mentioned this idea to zaiah, her concern was that athletes competing in such a game might do things like use steroids or remove their limbs to replace them with upgrades, and she was worried about the damage that otherwise healthy people might do to themselves competing this way.

Which, to be honest, I don’t see as a problem.

Professional NFL football players, who tend to be quite wealthy and arguably have access to some of the world’s best health care, have a nominal life expectancy of between 52 and 55 years. Playing football, in a literal way, cuts 20 years off their life span. Yet we as a society, and the players themselves, see this as perfectly acceptable.

Football and hockey players live with the long-term effects of repeated concussions, which lead to high rates of dementia later in life. Pro boxers even get their very own form of brain damage.

I think it’s interesting that we, as a society, find these consequences of professional competition hardly worth a second thought. There are risks in any sport; people make choices that can have negative consequences all the time, and not just in the arena of sports.

The advantage that I see to something like a Can-Am of Olympic sports, though, is that the playground of technology that such an event represents can and probably would have significant benefits for people who aren’t athletes. Technologies, drugs, and implants that might make better athletes, might also have applications in everything from reconstructive joint surgery to treating angina. The shape, and fuel economy, of your car can probably trace its roots back to some of the Chaparral design experiments.

Besides, a 7-second hundred yards would be pretty cool. And it would blur, even more, the fuzzy and sometimes arbitrary definitions of “normal” and “disabled.”

One could reasonably that the American lifestyle, with its high-fructose corn syrup, largely sedentary jobs, poor indoor air quality, and abhorrence of exercise, is an experiment in producing the most pessimal possible physical conditioning. Wouldn’t it be interesting to see what could happen if we applied the same principles to the most optimal?