My browser has a ridiculous number of windows open yet again, so here we go with another List of Linky-Links. This episode features some neat science and technology links, polyamory (of course), and some lovely eye candy thrown in for good measure. The eye candy is all the way at the bottom, I’m afraid.

Ready? Then off to it!

First up, we have this article about what happens when you combine a car with a Segway. The result is a bit goofy, but I’d totally drive the black one.

Next up, courtesy of figmentj, a VERY cool new technology for making permanent brain electrodes that dissolve onto the surface of the brain. Conventional implants are stiff, brittle, and prone to damage when the brain moves around, which it does by a surprisingly large amount.

And while we’re talking brains, here’s a quick reference guide for hacking toy EEG devices to do all sorts of other cool stuff, like interfacing with a computer. I love living in the future! I still want Google implanted in my brain.

Speaking of brain hacking, the Scientific American Web site asks, When will we be able to build a brain like ours? Given the complexity of the brain, and how much we still have to learn about it, plus the complexity involved in modeling it, I’d venture to say the answer is “not yet. Not never, but not yet.” We are to doing that what the Wright Brothers were to building a Stealth bomber, I reckon.

From the Department of What The Fuck, someone has modified an old Apple //e computer to be a Twitter feed reader. It doesn’t actually access the Twitter Web site directly–just writing a TCP/IP stack for an Apple II would be a horrifying undertaking–but instead it does something even weirder. It pulls data from another computer through the joystick port.

Someone recently emailed me from my transhumanist Web page (or maybe it was my grammar page, I don’t recall) with this link to Less Wrong, a blog about rationality and skepticism. It’s an interesting read. joreth, zensidhe, datan0de, emanix, seinneann-ceoil, peristaltor, I think you guys might like this place, if you don’t know about it already. I particularly like this quote about the value of introspection: “The road to harm is paved with ignorance. Using your capability to understand yourself and what you’re doing is a matter of responsibility to others, too. It makes you better able to be a better friend.”

Someone on the Polyfamilies email list posted the link to this graphic showing the trustworthiness of different beard styles. OMG funny. Work-safe too. A rare combination in my world.

Polyamory’s been all over the news lately, and not in a good way. The Religious Right is beginning to take notice of us, in sometimes bizarre and always negative ways.

From the “Americans for Truth About Homosexuality” Web site, which might better be described as “We’re A Bunch of Closeted Self-Loathers,” we learn that the Gay Task Force (they have one of those?) is making polyamory part of the Gay Agenda™. Funny–last time I looked, a lot of GLBTQ folks didn’t like us poly folks, ’cause we mess up the “Gays are just like normal folks” message.

The “Amerika.org” folks, who still use Russian-looking letters in their logo and are still fighting the Cold War, produced this gem called All The Broken People. They aren’t quite sure what “polyamory” is, but they’re damn sure they don’t much like it.

The Internet is a neat toy, and sometimes people do bizarre things with it. One very cool Internet toy is the World Of Text. It’s a scrollable Web page that goes on to infinity in all directions (click and drag to scroll), where you can click and start typing anywhere you like. Everything you type is recorded and other folks on the site see it. Pretty cool!

Read the EULA before you buy: GameStation recently added a clause to the EULA claiming ownership of ther customers’ immortal souls…and almost nobody noticed.

The explosion of the Eyjafjallajokull volcano in Iceland shut down air travel across Europe and also made for some amazing pictures. This page of gorgeous high-resolution photos (which takes a while to load) is just absolutely spectacular. A small sample: 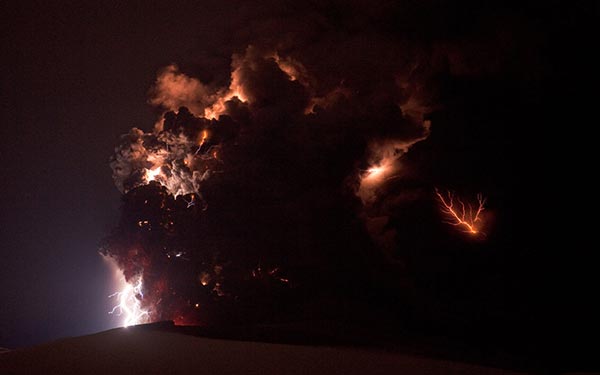 Volcanic ash plumes tend to be filled with very dramatic lightning, because the ash itself is electrically charged.