On the trip out to Portland from Atlanta, I made a point to pass through Venango, Nebraska, the tiny farm town where I grew up. 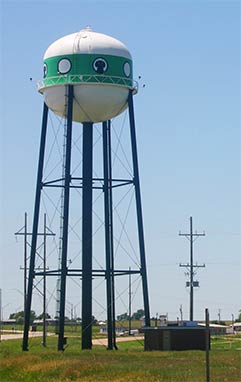 I’ve posted about Venango before, with a Google Earth view of the house I lived in. This time, I was able to pay the house a visit at ground level. zaiah and I spent about three hours wandering around with a camera, and it brought back some half-submerged memories.

We spent the night before in a hotel in Ogallala, Nebraska, the nearest town with amenities like hotels and restaurants. Ogallala is about an hour and a half from Venango; I remember making the trip as a kid on those rare occasions when we wanted to do something like eat out at McDonald’s.

One of Ogallala’s features is this water tower, painted to look like a flying saucer. At night, a ring of lights around the walkway flashes. I’d entirely forgotten about this water tower, and was a little surprised to find that, thirty years later, it was still there. (And, from the looks of it, with a fresh coat of paint.)

There’s something appropriate about this icon. In small Nebraska communities, anyone who hasn’t been living there for several generations might as well be an alien. I can remember a kid I went to grade school with being regarded as an “outsider” because his family had only been there for a couple of generations.

As you can probably imagine, I blended in like a squirrel in a den of velociraptors. The notion that I was an alien was only made all the more stark because I didn’t like football, wheat, or playing football in wheat fields.

Instead, I launched model rockets in wheat fields. I also had the only computer in town (an antique Radio Shack TRS-80 that was state of the art at the time). There was a guy in a similar small town about three hours away (Brandon, Colorado) who had an Apple II computer.

Needless to say, we knew each other.

This is Venango as seen from the main (and only) highway into town. The big white structure, for those of you who aren’t farmers, is a grain elevator, where vast quantities of wheat can be stored before being shipped out by truck or rail.

The last time I saw these elevators was almost precisely thirty years ago. From the looks of them, they haven’t been painted in that entire time. At least they’re all still there; every so often, some damn fool walks into a grain elevator with a lit cigarette and blows the entire thing into low earth orbit (note to mad scientists on my flist: grain dust is explosive, yo).

This is the main street through the center of town. The grain elevators can be seen from almost every angle everywhere in town.

Normally, at this point in the post, I’d talk about some pleasant or funny little anecdote about growing up in this place, but I really don’t have one. 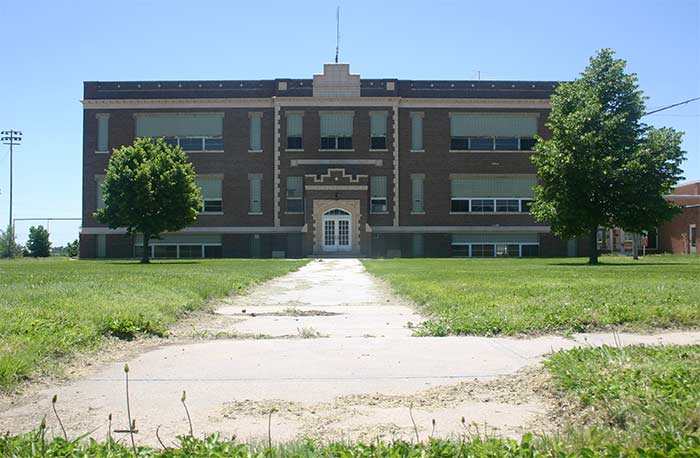 This is where I went to school. This building housed everyone from kindergarten through high school.

In my memories, the schoolhouse is huge; the reality is quite tiny. The first thing you see when you pass through those double doors is an enormous, dark polished wooden staircase leading up. That staircase still, to this day, features in some of my dreams.

Not that anyone has passed through those doors in a while. When the population of Venango started to fall shortly after we left, the school was closed. It’s been about fifteen years since the last time anyone has been there. The front lawn is still beautifully manicured, but nobody uses the building for anything. zaiah observed that an enterprising person who wanted to form an intentional community here could probably buy the place for a song and move in a dozen families or so, which would probably be the largest influx of residents in at least five decades.

The back of the school isn’t as nicely manicured. 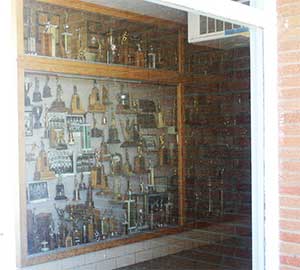 One of the eerie things about this pace is that there are no children. Anywhere. We visited on a gorgeous, breezy summer midmorning, and no kids. We saw people walking around the town, we saw folks working at the grain elevator, but no kids. Had there been any, anywhere, I’ve got to believe that some of them would use this playground, but nothing. Ours were the only footprints. The playground equipment is covered with a fine dusting of rust. Nobody plays here. You could film zombie apocalypse movies here. It was weird.

Just as eerie is the fact that the place looks like it was just closed yesterday. When we looked through the windows, we saw all the trophies still in the trophy cases, and the cafeteria had a deep freezer whose lid was propped open with a Styrofoam cup. It gives the uncanny impression of having been closed for the summer and then never approached again.

My father worked here as a teacher (K-8), and as the athletics coach, and as the bus driver. The number of trophies in the cabinet was always a little surprising, as Venango was infamous for fielding the worst teams ever seen in any sport; our football team, for example, scored a combined total of six points for the entire season the last year I was there. We barely had enough students to have a football team; if one guy was sick, they didn’t play.

I swear this is the same mat they had in front of the door when I was a kid, now crumpled up beside the school and with weeds growing through it. Go panthers!

And speaking of team spirit:

This is, or was, the basketball court and football field behind the school. Each clump of trees you see off in the distance marks a house. The trees are planted as windbreaks and snowbreaks, to prevent wind-driven snow from burying the houses. Yes, I’m being serious. 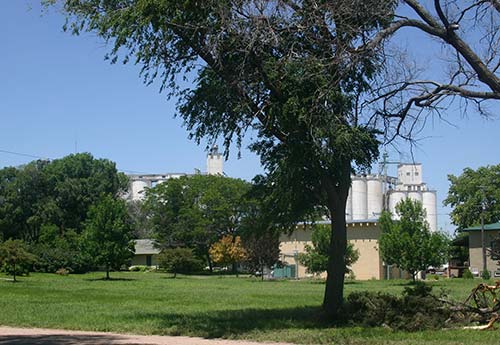 The view from the front of the school toward the grain elevators. Everything in this town is centered on those grain elevators; without them, there’s no reason for the town to exist.

In the last thirty years, the town’s population has dropped from 242 to 167. Even with the grain elevators, one could argue that there’s no reason for the town to exist.

This is the road I grew up on. The clump of trees on the right is my old house; we drove past it on our first attempt to find it, so this is the view back toward the highway from the road. And finally: 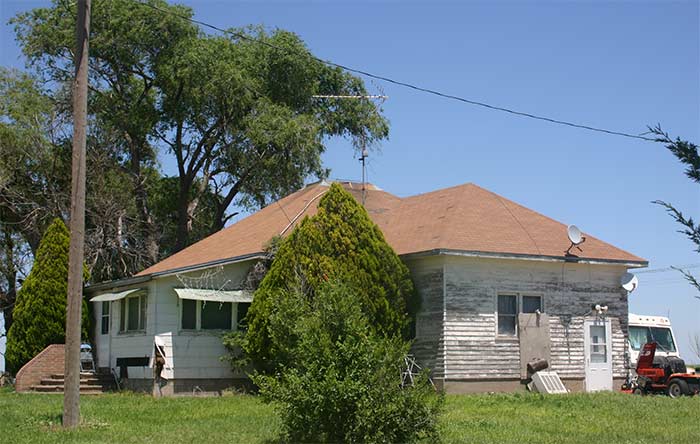 The house I grew up in. From here, I played with my computer, launched model rockets, flew kites, built a huge hydroponics garden that was eventually taken over by spider plants, and generally stayed the hell away from the other townsfolk and their football-in-wheat-field ways. Place looks a little worse for the wear; the past few decades have not been kind.

We didn’t stop. I don’t care who’s living there now. I’m just happy it isn’t me.