This isn’t actually a post about BSG, though the show is definitely a springboard for it. I liked the show a great deal, but in truth didn’t much care for the take-away lesson from the last episode, which I felt ended on a very science-negative, tech-negative, anti-transhumanist note.

Still, I expected more from the show than Lee’s “no city, no ships, let’s fly the entire fleet into the sun, then let’s go down to the native, pre-stone-age, pre-language indigenous population and live like they do” speech. After the uniformly high quality of the writing to this point, the “technology is the problem, let go and let God” ending struck me as jarring, preachy, and unnecessarily trite.

And speaking of preachy, resolving the show’s unanswered questions the way they did seemed a little silly. What was the new Kara? An angel from God What was the Six in Baltar’s head? An angel from God. What was the destiny of the Cylons? Destruction by God, via the hand (literally) of a dead Raptor crew. C’mon, guys, we’ve invested years in this show. Don’t we deserve a better payoff?

The ending of the show, in which the remaining humans renounced technology in favor of the path of the “noble savage,” really seemed to play on anti-intellectualism to me. The notion that the recurrent cycle of human-on-Cylon violence was writ inevitably into the human story in particular galled me; it seemed to accept as a given that late-20th-century Western notions about robotics and AI, and assumptions about the role sentient computers would play in society, were the only possibility.

So, on to the dream. My subconscious mind apparently decided to do a complete rewrite of the last episode, one more focused on looking ahead rather than looking behind.

It started with getting the Galactica (or at least most of it) on the ground in one piece. I have no idea how that would happen, so I’ll just handwave it away, a noble tradition in mainstream science fiction.

From there, things took a turn for the weird. 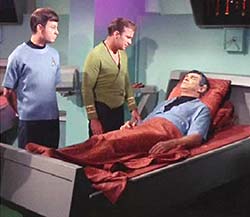 My dream did take some liberties with the technical capabilities of the ship, specifically with regard to biomedical tech.

Something I think is eminently reasonable, by the way. I mean, seriously, c’mon. We have a society with faster than light travel and strong AI and they can’t cure cancer? WTF is up with that?

I will never, ever understand why every mainstream space sci-fi always seems to assume that wonderful advances in technology and science don’t apply to basic biology or medicine. Somebody, please explain to me: why, oh why do we see countless stories and shows in which people are seen flying through space faster than light, teleporting around, visiting other dimensions, and they still can’t cure a simple viral infection, much less cancer?

We see all this tech, and somehow in this storyline the state of medicine permanently stalled at 1982? I’ve got an iPhone in my pocket that is more miraculous than any of the gadgets the Star Trek writers could conceive, and the state of medical technology is advancing faster than any other form of knowledge save for computer tech, but somehow in centuries hence when we have interstellar flight and people take planet-hopping for granted, folks will still only live to about 70 years old or so and will be felled by swine flu? Jesus H-for-hypothetical Christ on a pogo stick, that’s ridiculous!

Anyway, the one area of tech I assumed would be available is some form of basic suspended animation. With Galactica safely ensconced in bedrock in some place where there’s not a lot of tectonic activity, we’re set to do something a little more reasonable to help try to break the cycle of “all of this has happened before, all of it will happen again:” intelligent, thoughtful planning.

The basic premise is straightforward: This indigenous, pre-language, pre-literate society is quite likely, if it survives, to develop technology, and once that happens, it tends to follow an exponential upward curve. So if you’re convinced that technology will inevitably cause the cycle to repeat, and you also have a sapient species, well, you’re in a bit of a pickle…

…unless somehow you can use your knowledge of what’s to come to steer away from the iceberg, y’know?

So in the dream, I and a handful of the crew resolved to do exactly that, sleeping in suspended animation in shifts for generations at a time and then coming out to apply a few nudges to society to steer it away from the attitudes that lead to creating sapient slaves and then having them rebel.

One of the key philosophies in that job–something that we see the characters (and possibly the writers) in Battlestar: Galactica groping toward but never quite reaching–is the idea of personhood theory.

Personhood theory at its most simple is just the idea that if something reasons and thinks, it’s a person. Human beings have the ability to think; that makes human beings (including human beings which various societies throughout history have denied personhood–blacks, Jews, women, and so forth) persons. 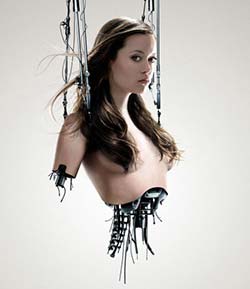 Clones of human beings reason; that makes them persons.

You get the idea. It’s not a terribly complex concept.

Persons, whatever form they may take, have certain rights, simply by virtue of being persons. You don’t, for example, treat persons as property. Slavery isn’t cool. A reasoning machine? A person, and therefore, not a slave.

In my dream, those of us left from the Galactica’s original crew nudged and urged and cajoled the developing societies on earth toward personhood theory, throughout history, remaining in suspended animation for long periods of time and then during times of rapid social or cultural change coming out to try to move things along in that direction.

There was, I recall very vividly, always that little bit of fear when you went under. You’d lie down in a dark chamber barely large enough to accommodate you, and as the lid hinged shut and you started feeling sleepy and disoriented, you’d always wonder in the back of your mond if something would go wrong and you’d end up going from suspended to dead. If things went well, the chamber would close, you’d pass out,and then an instant later it’d open up again and someone would help you out, and many decades would have gone by; but if things didn’t go well, there was always the possibility that the lid would shut and that’d be it.

During the Industrial Revolution, I recall working on a system to power what was left of the Galactica on fuel oil rather than tillium, which was a huge relief, because it meant not having to nursemaid every single watt of power all the time. After that was all over and society had moved to a post-industrial phase, I seemed to spend a lot of time on college campuses.

I’m not entirely sure if we succeeded or not, because I was yanked out of all this by the very sharp teeth of a very insistent cat who chose that moment to start biting my nose. I do think, though, that my answer has a bit more going for it than “God done it.”

Maybe that’d make an interesting premise for an ongoing series of science-fiction novels.

56 thoughts on “Dreaming of Transhumanism Remixes”