So. Five days spent in Los Angeles is, apparently, all it takes to flip a person’s most basic, fundamental perceptions of himself completely upside-down.

Take the matter of horses, for example. Throughout the ebb and flow of my entire adult life, through all the ups and downs, all the explorations of distant shores, all the joys and sadness of a life spent testing boundaries, there have always been a few constants I could hold on to. Among these constants is the certain knowledge that horses don’t much like me, and I don’t much like them.

The last time I encountered a horse, I was still living in Nebraska, so I would have been twelve years old or so. The horse was at a camp high in the Rocky Mountains, where the air is thin and stabs you in the lungs like a drunk with a broken bottle. “Experience the wilderness!” the camp brochure said. “Ride on horseback!”

The horse I rode, whose name I’ve long since forgotten, spent the entire time, as we rode down the trail, reaching back and trying to bite me. I came away from the experience with two lessons: first, horses are bad-tempered and somewhat aggressive animals that like to bite, and second, nothing made of hay should ever be that hard.

The horses and I have existed in a sort of détente since then. It’s an easy truce; they stay in the farms, I stay in the cities, and we’re all happier for it.

Then I went out to visit Gina. And Gina, as it turns out, has a horse. A horse named Rockstar. This is her horse. 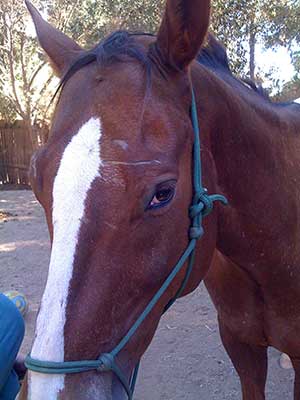 It was with a certain trepidation that I met Rockstar. Horses are big, terrifyingly big animals, and even the most casual glance at horse physiology reveals that they appear to be half a ton of muscle in service of a set of back legs capable of kicking a Toyota Prius through a cinder-block wall.

And you know what? Her horse is awesome.

Take a big, affectionate, kind of slow-moving puppy dog, give him a fondness for having his nose scritched, and make him capable of kicking a Toyota Prius through a cinder-block wall, and you’ve got Rockstar. Plus, he’s fun to ride. When did they start making horses fun to ride, and why wasn’t I notified of this?

And now, gentle readers, I must go off to test some of my other most basic and fundamental assumptions about the world, for truly does it seem that the sky must be falling. Plus, I’m sore in muscles I didn’t even know I had.