One of the hilights of this weekend for me was meeting a personal hero of mine. His name is James Randi, and he’s a stage magician, founder of the James Randi Educational Foundation, and the adversary of quacks, fakers, charlatans, and frauds of all kinds. 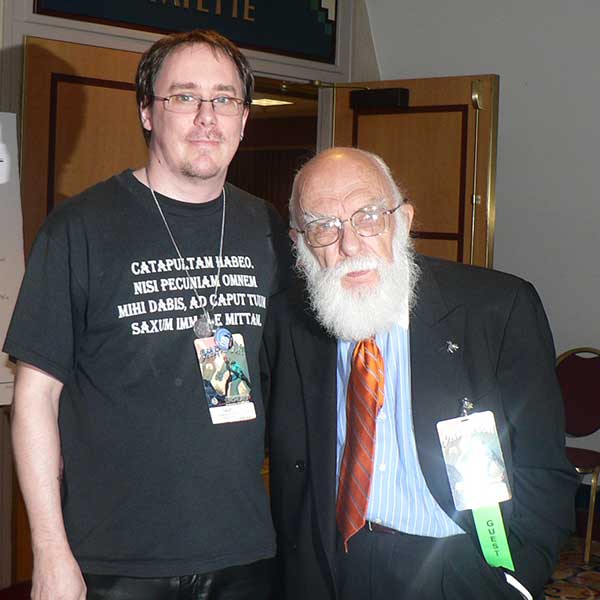 I first got hooked when I read his book Flim-Flam! Psychics, ESP, Unicorns, and Other Delusions, first published in 1982. It’s a scorching indictment of all sorts of phonies, fakes, and frauds, from so-called “psychic” and sometimes petty thief Uri “spoon-bender” Geller to “psychic surgeons” who pick the pockets of the desperate and gullible with a handful of chicken guts.

For many years now, Randi has offered a Million Dollar Challenge–a cool one million dollars to anyone who can demonstrate any psychic, paranormal, or otherwise outside the realm of conventional science under controlled conditions. The person making the claim, be it telepathy or dowsing or homeopathic “medicine” or precognition.

A lot of folks who claim to believe in these things don’t much cotton to the notion of actually testing them, and as a result there’s all kinds of objections to the challenge, ranging from “it’s impossibly biased” (in reality, it is the person who claims the ability or phenomenon, not the James Randi Educational Foundation, who designs the test and describes what constitutes a success) to the idea that Randi is somehow “anti-psychic” and his mere presence interferes with “psychic” abilities (Randi is never present at any of the tests, and he is not even informed when the tests are scheduled or where they take place) to the claim that the Foundation will always cheat to skew the results (the Foundation does not run or administer the tests; all tests are administered by a third party, often a university, that both the claimant and the Foundation trust).

In short, this guy has spent a tremendous amount of time and energy over the last couple decades in the thankless task of opposing fraud, gullibility, anti-intellectualism, ignorance, and credulity that poison and corrode reason and attack the foundation of post-industrial society. It is hard to overstate my admiration of this man; people of reason everywhere owe him a debt of gratitude.

Wen I first met him at Dragon, I had a sewing machine under my arm. That’s a whole different story, and one I shan’t go into in this post.