Science is teh AWESOME! 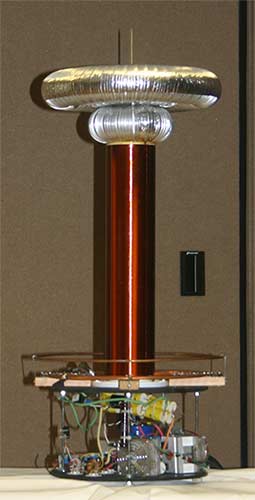 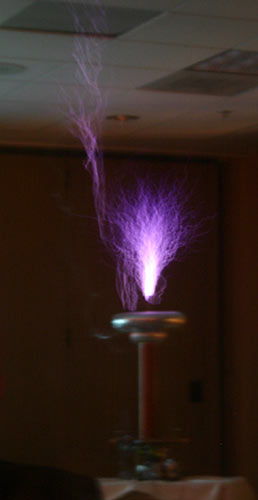 Tesla coils buzz when they operate. Essentially, what you do is you inject a current into the primary winding, which is a loop of wire at the base of the tall, skinny coil. This indices a current in the secondary winding, which is the tall, skinny coil. The current travels up the coil ’til it hits the top, then travels back down again. You inject another current into the primary winding, and it creates another, stronger wave of induced current in the secondary winding, which travels up the coil and then back down again, when you hit it again, and each time it gets stronger until finally it becomes strong enough to shoot lightning bolts out the top. (That’s the Reader’s Digest condensed version for non-geeks, anyway).

I’m assuming that making them sing involves changing the frequency of the voltage supplied to the primary winding, so that they buzz at a different rate. If that’s true, it suggests that there’s a limit to the range of tones you can squeeze out of the coil, because every Tesla coil has an optimum frequency (determined by the size and construction of the coil) for the primary voltage. Deviate from that frequency and the coil operates less efficiently; stray too far from it, and the coil doesn’t work at all.

In any event, these things are cool as hell to watch. Even if there does need to be more VNV Nation on the playlist.